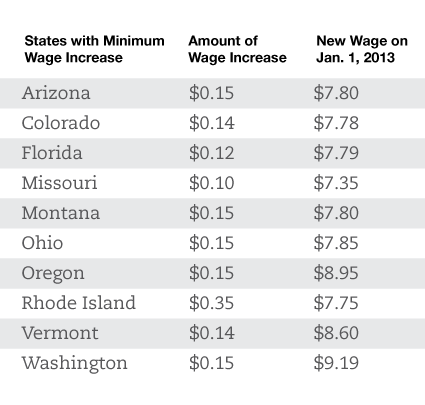 Nearly 1 million U.S. workers will be getting a New Year's Day gift: a small raise after 10 states boost their minimum wages.

Nine states will adjust the wages to accommodate the rising costs of living, as required by state laws, while Rhode Island will implement a law signed by the governor in June that raises its minimum wage to $7.75 per hour. The wage hikes range between 10 cents and 35 cents per hour, adding between $190 and $510 to the average affected worker's annual pay.

With those changes, 19 states and the District of Columbia will have minimum wages above the federal level of $7.25, which translates to about $15,000 per year for a full-time worker. That rate has been in place since 2009 and has not been adjusted for inflation.

The National Employment Law Project, an advocate for workers' rights, is among several groups calling for lawmakers to boost the federal rate.

“We need policies that make sure workers earn wages that will at the very least support their basic needs,” Christine Owens, the labor group's executive director, said in a statement Wednesday (December 19). “But earning an income that meets basic needs shouldn't depend on the state where a working family lives.”

U.S. Senator Tom Harkin, of Iowa, introduced a bill last July that would raise the minimum wage to $9.80 by 2014 and adjust it each year. But the legislation has little chance to pass in a divided Congress still wrangling over budget issues.

Meanwhile, New Jersey's Democrat-controlled legislature passed a bill early this month that would raise wages, currently at the federal minimum, by $1.25. Governor Chris Christie, a Republican, will likely veto the measure, saying it would burden businesses still recovering from Superstorm Sandy. Anticipating a veto, leaders of both houses have said they will push a constitutional amendment. That would require both chambers to pass the legislation next year. Voters would then weigh in during the 2013 election.

A battle is also brewing in California, where the state's $8-per-hour minimum wage has remained the same for five years. Assemblyman Luis Alejo, a Democrat, is pushing a bill that would gradually raise the wage to $9.25 by 2016. The last attempt to adjust the state's minimum wage in 2011 met strong pushback from the business community and ultimately failed.

In 2010, a study of restaurant worker salaries, published in the Review of Economics and Statistics , found “no detectable employment losses from the kind of minimum wage increases we have seen in the United States.”