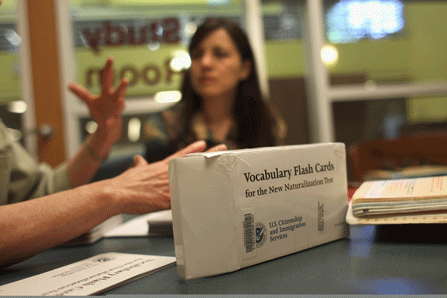 Just four years ago, Oakland public schools taught English as a second language to 14,000 adults. The students' native tongues included Spanish, Mandarin, Arabic and more than 40 other languages. Then, the school district eliminated the program.

Today, because of budget cuts at the state capitol and the district headquarters, Oakland has reduced its adult classes to 320 parents who need to improve their English so they can help their children in school.

It is a familiar story in California, home to a quarter of the country's population of adults with limited or no English skills. School districts are drastically scaling back adult education, especially English classes, all over the state.

“Districts are so desperate for funds just to take care of their basic mission that they've had to make these horrible decisions,” says Christian Nelson, the head of adult and career education at the Oakland school district and president of the California Council for Adult Education. He says 70 percent of the state money that once supported adult education has been redirected to fund instruction for children.

States' ability to provide adult English classes could be a problem in negotiations over a federal immigration overhaul, because any reform plan almost certainly would require immigrants to know or learn English.

Motivation, but no time

Regardless of what happens on Capitol Hill, there are plenty of reasons for immigrants to learn English. Joshua Hoyt of the Illinois Coalition for Immigrant and Refugee Rights says his group found that immigrants could increase their annual pay from $15,000 to $30,000 just by knowing English. “You can't go from being a dishwasher to being a waiter without knowing English,” Hoyt says.

Speaking English also allows parents to help their children with school work, makes day-to-day interactions easier and is a requirement for U.S. citizenship.

But picking up a language is especially difficult for older adults, and many immigrants in the country illegally have low levels of education in their native countries. They may not have money for classes. And for immigrants working one or more jobs while raising a family, Hoyt says, “time is the critical scarce resource.”

For schools and for states, the critical scarce resource is money. Community colleges, which run adult education services in many states, have been swamped with students during the economic downturn, and public funding has not kept up with demand. Community colleges spent less per student in 2010 than they did a decade earlier. Financial pressures are also pinching school districts and community groups that offer English instruction to adults.

Even a relatively small change at the federal level can have a sizable effect on local resources. President Obama last summer offered certain young immigrants a chance to work and stay in the United States without the threat of deportation if the immigrants could show they were in school or had graduated. In Oakland, Nelson says, demand for Spanish-language GED courses spiked. They now have the longest waiting lists of any of the adult classes in the district.

Demand for English classes could soon spike, too.

During his re-election bid, Obama said not finding a deal to revamp the country's immigration laws was his “biggest failure” as president, and many expect Obama to make it a top priority early in his second term. John Boehner, the Republican speaker of the U.S. House, said recently that a comprehensive immigration rewrite is “long overdue.”

Any major immigration reform bill is likely to include an English requirement. The president, who considers it “embarrassing” that he does not know any foreign languages, has said unauthorized immigrants who want to stay in the country should have to learn English. The White House's outline for an immigration overhaul does not specify when immigrants would have to know English, nor how much English they would have to know. Current law requires immigrants to be able to speak, read and write English to become naturalized U.S. citizens.

The specifics, which would be worked out with Congress, could go a long way in determining how many immigrants qualify and how involved states are in the process.

Michael Fix, a senior vice president of the Migration Policy Institute, points out that the last major immigration overhaul in 1986 came with a $4 billion influx in federal funding that helped states provide English classes. Under the amnesty provision in that law, immigrants in the country illegally had to take 40 hours of English classes in order to be granted legal status.

Because both states and the federal government are financially strapped, Fix says the most likely scenario is that immigrants themselves would pay a fee, which would then pay for the services they need.

States already receive federal money for adult education, including classesin English as a second language, under the Workforce Investment Act. Four years ago, California received $81 million from the federal government, but it added another $773 million of its own state money—more than the federal government spent on the entire country.

But the Great Recession hit California harder than just about any state, and lawmakers included cuts to schools in their budget-reduction package four years ago. To help school districts cope with lost revenue, legislators let the districts use specially designated funds—such as those for adult education—for general purposes. The cash-strapped districts took advantage, especially in the last year. “They have essentially just devastated spending on adult basic education,” says Fix.

In fact, 23 of the state's largest 30 school districts made “major cuts” to adult education programs, according to a June study by EdSource, a group that studies California schools. (Before the cuts, programs in English as a second language accounted for more than a third of all adult education students, by far the largest program area. The state is home to nearly 7 million people with limited English skills, according to the Migration Policy Institute.)

In Los Angeles, administrators are relieved that the school district still supports some adult programs, even though the budget is just a fourth of what it was four years ago. The school district now offers 200 classes in English as a second language, down from 500. There are long waiting lists to get into those classes, even though the district started charging students $30 a semester, the first time it has imposed fees.

The changes do not mean the school board no longer believes in the effectiveness or benefits of adult education, says Michael Romero, who heads the district's adult and career education office. Instead, he says, “it is the crisis in California.” Even the recent passage of state tax hikes will likely not help, as most of that money is already spoken for to help schoolchildren.

At the Centro Latino for Literacy, just a few miles from downtown Los Angeles, the cuts mean that about 600 students have been taking English as a second language on site, down from 2,000 the year before. The number will dwindle even further next year.

But the center's main focus is teaching literacy—in Spanish. Mari Riddle, the president and CEO, says there are 216,000 Spanish speakers in the Los Angeles area who cannot read or write in their native tongue. In the country, there are more than 1.6 million. “Many of our students have never walked into a classroom, have never held a book or pencil in their life,” she says. “The concept of going to school is unfamiliar.”

Riddle says it is easier to help the immigrants read and write a language they already know. Even for the third of the center's students who speak Spanish as a second language, written Spanish is easier to pick up than English because pronunciation is easier than it is in English.

The center offers two computer-based courses in Spanish before graduates typically move on to learning English. The first is already online, and Riddle hopes to have the second available on the Internet next year. Making courses available online is one way many groups are seeking to expand English offerings even as their budgets are being cut.

It can take close to a year for students to complete the two Spanish courses and move on to English classes. But Riddle says the center's students have plenty of motivation. “Their goal, first and foremost, over any other goal, is to learn English,” Riddle says. “We just require them to come in and want to learn.”