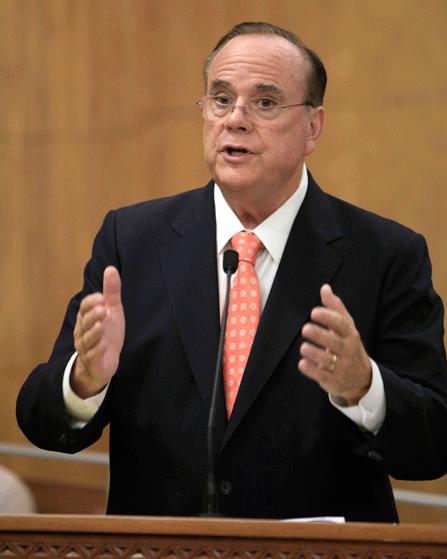 Top finance officials in California and New York are proposing closer state-level scrutiny of local government budgets to help prevent the distress that has plagued many cities, towns and counties over the last few years.

California Treasurer Bill Lockyer says he wants the state to develop a warning system in which local government finances would be monitored and cities in fiscal trouble identified. New York Comptroller Thomas DiNapoli says he intends to initiate a scoring technique to categorize cities under the most strain. In this way, DiNapoli says, “local officials and the public would have sufficient time to discuss options for turning things around.”

The separate calls for scrutiny from two influential big-state elected officials reflect a growing sense in the financial community that states cannot stand by as some of their cities struggle to stay solvent. Local governments have been slow to emerge from the recession because of a gradually worsening decline in property tax revenue.

California and New York cities have been hit especially hard by the downturn. The California communities of San Bernardino, Stockton and Mammoth Lakes filed for bankruptcy protection last summer and nine other California cities have declared financial emergencies in the last few years. DiNapoli released a report in September saying that spending had increased by $2.7 billion in 61 New York cities since 1980 (excluding New York City), but revenues went up only $2.1 billion. Cities are required to balance their budgets.

Nineteen states, including New York, have statutes allowing state-supervised local government assistance programs. The help varies from technical advice to cash grants to the appointment of overseers or control boards to run the city until it recovers. The programs can be controversial, as Michigan has found out, because local elected officials nearly always prefer making their own decisions instead of having the state step in with managers and boards.

Most intervention programs are reactive, meaning that state officials wait for a distressed city to request help. Lockyer and DiNapoli are advocating a proactive approach that spots problems before they escalate into a crisis. The California Legislature would have to approve Lockyer's proposal; DiNapoli can implement his plan on his own though he has asked local officials for their feedback.

Lockyer and California controller John Chiang, who also has pushed for additional state oversight of local governments, do not have history on their side. California has long held that its cities should manage themselves, which is why the state did not offer assistance to Orange County, Vallejo, Stockton or San Bernardino, the biggest bankruptcies of the last 18 years. The self-governing tradition goes back as far as the pueblo governments of 19th century Mexican rule and the gold rush mining camps of 1848-1855.

“Cities are like the famous line from Greta Garbo, you know, ‘I just want to be left alone,'” says Peter Detwiler, a longtime finance staffer in the California Legislature. “We're terribly decentralized in California. We love it that way.”

Lockyer, who has spent 37 years as a state officeholder and legislator, is well aware of California cities' penchant for independence. But he fears that the financial distress of one city could spread to others, possibly damaging the state's credit rating along with it.

“If the spectrum of state engagement is doing nothing on one side to a complete, total takeover [of a city] on the other side, we're talking about something in the middle,” Lockyer says. “We're concerned about the local bankruptcies because of the stress on local services but also the worry about it being infectious and causing more widespread credit downgrades.”

The treasurer sells the state bonds that pay for roads, sewers and schools, and California is one of the largest issuers in the nation's $3.7 trillion municipal bond market. The better the credit rating, the cheaper it is for the state to borrow.

Lockyer emphasizes that he is not proposing that the state swoop into a city and take over its operations, as financial control boards have done in cities such as Philadelphia and Washington. Nor would California offer cities cash grants or assume payments for their debts. The state has its own budget problems. But at the very least, he says, the state should monitor local government finances and offer technical advice when cities are showing signs of strain. If California had such a monitoring system in the 1990s, state officials might have detected that Orange County's interest income from risky investments accounted for a higher-than-average percentage of its revenues. That information could have indicated that Orange County was headed towards bankruptcy, analysts say.

California does carefully monitor its nearly 1,000 school districts because they rely more heavily than cities on the state's general fund to finance education. Lawmakers set up an elaborate fiscal oversight system in 1991 requiring county offices of education to monitor school district revenue, enrollment, spending, cash flow, debt and other costs at specific points during the year, such as when the budget is approved. In the weakest districts, the state arranges for an emergency loan from the general fund. Since 1991, nine school districts have received such loans, most recently $55 million in September to the Inglewood schools in suburban Los Angeles.

Though modest, Lockyer's plan still could run into opposition from California city officials who often battle with lawmakers over legislation the locals view as a threat to their sovereignty. Controller Chiang's 2011 proposal to audit distressed cities and name outside panels of fiscal advisers never came to a vote.  Cities also fear that any state intervention arrangement could favor public employee unions, which carry considerable clout with the Democratic-controlled legislature, says Michael Coleman, the principal fiscal policy adviser to the California Society of Municipal Finance Officers and the League of California Cities.

But getting the unions on board may be crucial to the success of Lockyer's plan. Resistance from labor was a big reason why Michigan voters decided Nov. 6 to overturn a revised intervention program in which the state appointed emergency managers to run the day-to-day operations of Michigan's most distressed cities. Union leaders contended the GOP-led legislature gave such managers too much power because they could invalidate labor agreements. Michigan lawmakers have sent Governor Rick Snyder a less bold piece of legislation that would give troubled cities and school districts a choice between an emergency manager, a financial consent agreement with state officials, mediation or Chapter 9 bankruptcy.

New York has a different tradition than California or Michigan. It has frequently intervened in local government affairs, starting with New York City in 1975. To help the city avoid bankruptcy, the state advanced it money and set up an independent corporation to sell bonds backed by state taxes.

Since then, the state has assisted distressed local governments on a case-by-case basis, often resulting in a financial oversight board of some type. The state has set up oversight boards for the cities of Buffalo and Troy, and Erie and Nassau counties, with four separate sets of duties under the legislation creating them. The major credit rating agencies have criticized the state's lack of a single, formal intervention program, noting that the existing control boards have had mixed results.

The scores would classify levels of distress—significant, moderate, “nearing fiscal stress” or none of those categories. With existing staff, the controller's office would offer technical help such as budget planning at an early stage to assist the city or school district in correcting its problems and forestalling a deeper crisis. In this way, DiNapoli says, “We can have a more honest conversation about the status of their budgets, what the numbers are, as a way to come up with solutions.”

Other Stateline stories about state intervention programs include:

Pittsburgh and Harrisburg: A Tale of Two Deep-in-Debt Cities