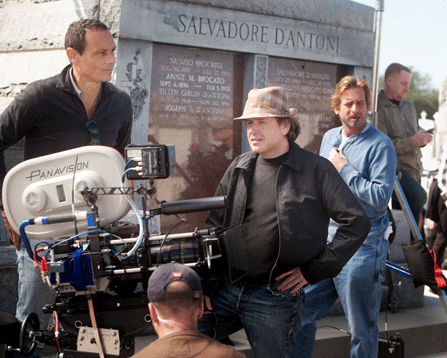 The motion picture industry is a major recipient of transferable tax credits offered as an economic development tool in states throughout the country. (Patti Perret/CBS via Getty Images)

When Danny Bigel was a film producer, one of his biggest headaches had nothing to do with pampered actors, finicky directors or the fickle movie-going public. Instead, it was finding anyone who would pay a good price for his state tax credits.

Over the last decade, states have entered into a fierce competition for the highly mobile movie business. Today, about 30 states offer tax credits to try to lure moviemakers. In using these tax credits as an incentive, however, states face a complication: Since most film production companies spend only a few weeks shooting in a state, they don't usually owe much in state taxes.

States, though, have become adept at providing tax breaks larger than businesses' tax burdens—to, in effect, make a company's tax burden a negative number. One way they do that is through “transferable” tax credits. If the value of a company's credits is higher than its tax liability, it can sell the excess credits to another taxpayer who owes the state taxes.

Bigel, like others in the film industry, would work with tax credit brokers to find buyers for credits. But he'd never know whether the brokers had really found the buyer who was willing to pay the best price. “It was always frustrating and confusing and bewildering to me,” Bigel says, “why there wasn't a more efficient process.” In November, Bigel launched the Online Incentive Exchange, a new market where prospective buyers of transferable tax credits can compare prices and complete deals.

Like Bigel, many people have found transferable tax credits to be a little bit bewildering. But, they're also a significant — and, at least in some places, controversial — tool that states use to attract businesses and incentivize investments.

In this explainer, Stateline examines how and why states use transferable tax credits, how the industry works and what the critics say.

What types of tax credits are transferable? Why have states created them?

Tax credits for entertainment, renewable energy and real estate development are the ones states typically make transferable. More than a dozen states have transferable film tax credits, including Georgia, Florida, Illinois and Pennsylvania.

Businesses in these industries require large investments: It takes a lot of money to build a wind farm or make a movie. Compared to the size of those investments, their state tax liabilities are usually small. “Most of the companies that come and film in Georgia are not going to have income tax liability in the state,” says Lee Thomas, director of the Film, Music and Digital Entertainment Office in the Georgia Department of Economic Development. “With transferable tax credits, Georgia provides incentives worth 20 to 30 percent of a production company's total spending in the state, benefits that can easily reach millions of dollars for a major movie.

Transferable tax credits aren't the only way states provide tax incentives to companies that don't owe much in taxes. Many tax incentives are “refundable.” That means that if a company earns more in tax credits than it owes in taxes, the state pays the difference in a refund check.

How much do transferable tax credits cost?

No one knows for sure how much transferable tax credits cost states, but it seems clear that the total is billions of dollars a year. On its own, for example, Missouri's Historic Preservation Tax Credit — which offers transferable tax breaks worth 25 percent of the cost to rehabilitate historic properties — has cost the state $500 million over the last four years. Louisiana paid out more than $200 million in transferable film tax credits in fiscal year 2012.

How are they bought and sold?

As transferable tax credits have proliferated over the last decade or so, they've helped create a new cottage industry: tax credit brokers. Thomas, for example, has a list of nearly 30 tax credit brokers that she offers to production companies in Georgia to help them sell.

Even people who work as brokers sometimes have a hard time explaining why there's money to be made helping one company sell a tax break to another company. Bruce Deichl, president and co-founder of Tax Credits, LLC says he spent years trying to explain to his daughter what he does for a living. “Finally,” he says, “she gave up and said, ‘My dad deals drugs.'”

Matching buyers and sellers isn't as easy as it sounds. “When we market a tax credit, we have to explain to our investors what our risk is,” says Jeff Jacobson, president of Clocktower Tax Credits. That risk includes the possibility that the credits will be rescinded. If the credits were obtained through fraud, for example, a state may be able to reclaim them later. The brokers help play the role of vetting the buyers and the sellers.

Furthermore, the buyer has to owe taxes in the same state where the seller has the credit. Typically, the buyers have to owe quite a lot in taxes to make it worth their time and money (each transaction is likely to require lawyers and accountants). As a result, many buyers are Fortune 500 businesses, including banks, insurance companies and large retailers.

For the buyers to benefit from the transaction, the tax credits have to be sold for less than their full value. Prices vary, but brokers say that it's typical for sellers to get 85 or 90 cents on the dollar.

Not all of these deals are arranged after the fact. Gwendolyn Caldwell, the senior vice president of Government Affairs at the State Chamber of Oklahoma, spent this year's legislative session defending the state's transferable renewable energy tax credit and historic preservation tax credit. Caldwell says that even though businesses don't earn the credits until after they've made the required investment, they often sell the rights upfront. Then they can use that money to build a wind farm or renovate the historic property they've promised to fix up.

What is the Online Incentive Exchange? How is it different?

The Online Incentive Exchange is, in effect, an effort to cut the brokers out of the business. One of Bigel's big frustrations as a producer was having to trust a broker as to what constituted a good price for his tax credits. In the exchange, prospective buyers and sellers can compare prices, which are updated in real time.

So far, the exchange is open only for Louisiana, but the company hopes to one day expand it to 45 states. Bigel says California, Georgia, Connecticut and Massachusetts are next.

Not surprisingly, the brokers are skeptical. They say they have built relationships with buyers and sellers, who count on them to provide due diligence. “Corporations for the most part want to work with brokers they trust,” says Josh Lederer, a vice president with Fallbrook Capital. But Bigel says that the exchange's vetting process will be just as thorough as the brokers.

What are the criticisms of transferable tax credits?

Transferable tax credits are part of the larger debate over business tax incentives going on in statehouses around the country. Critics on the left argue that states commit too much money to incentives, money that could go to schools or health care. Critics on the right say that states could eliminate incentives and use the savings to lower tax rates for everyone. Many businesses and policymakers argue, however, that they're an indispensable part of states' economic development strategies and that growing the economy will ultimately help a state's citizens and its bottom line.

There are also debates about transferability itself. Opponents question, for example, whether it makes sense for tax breaks to be sold to large companies the state never set out to help.

In Oklahoma last year, a legislative taskforce studying tax credits recommended eliminating transferability entirely. So far, lawmakers haven't acted on that idea, but the debate is continuing. “I just think that if you got a tax credit, take it,” says Earl Sears, the chairman of the House Appropriations and Budget Committee. “If you don't have enough tax liability, you don't get the tax credit.”

Still, refundable credits provide a bigger benefit to the company at the same cost to the state—since companies don't have to hire brokers or sell them at 85 or 90 cents on the dollar. “We're certainly open to making these tax credits refundable instead of transferable,” says Caldwell of the Oklahoma Chamber, “if that works for the industry.”