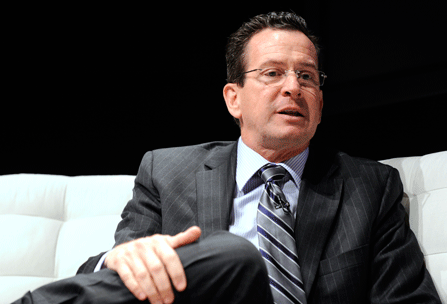 Connecticut Governor Dannel P. Malloy hasn't had an easy first term. The Democrat won the governor's office by just over 6,000 votes in 2010 and faced the largest per capita deficit of any state. In his first year, over the fierce opposition of public employee unions, he pushed through major contract changes for state workers and, against the objections of Republican lawmakers, a $1.5 billion tax increase.

He has had his share of policy successes. Malloy overcame opposition by teachers unions and persuaded the legislature to pass his plans to incorporate performance evaluations into teacher pay and to limit teacher tenure. He made good on his longstanding promise to abolish the death penalty.

Connecticut has been hit three times in the last year by natural disaster. Now, as the state cleans up following Hurricane Sandy, it faces a new $415 million budget shortfall in the coming year. Malloy has already announced $170 million in spending cuts, mostly from social services.

Malloy sat down with Stateline last week to talk about his experiences negotiating with unions, his thoughts about disaster recovery, and how he's using his experience as a prosecutor to promote public safety in the state.  He was interviewed by Stateline staff writer Maggie Clark. Below is an edited transcript of the interview.

Your efforts to change education policy put you in direct conflict with teachers' unions. Has that relationship improved? What can other states learn from your experience negotiating with teachers?

Last year, we had a big dustup. The unions opposed my education changes vigorously and spent a lot of money to oppose them. Eventually, we came to an agreement and that agreement passed, and I think that both organizations have evidenced a desire to work together. I'm hopeful that that will be the case.

We tend to think in our national discussions of unions that an organization represents a large percentage of all teachers in the state and its approach is going to be the same, but what I have found is that there is a difference on a local basis.

We have two union organizations in the state (The American Federation of Teachers and the Connecticut Education Association), but effectively you have 165 organizations, one for each school district. I think you have to look at it that way. They are local associations, some that are substantially more progressive, and there are those that are more resistant to change, just as at the national level.

The idea that you can reform education without dealing with those two organizations, either in a positive or a negative way, of course, makes no sense at all.

Teaching is a profession and it needs to be treated as such and collegiality should be a target. Having said that, if you have an organization that does not want to change, and I'm talking about a local, then somehow you need to cause change to have to be made.

You recently announced a significant budget shortfall and additional cuts, even after raising taxes in 2011. Is there something unique about Connecticut that is making it harder to come out of the recession?

We're seeing additional and longer-term costs in terms of providing Medicaid to people because of their status as long-term unemployed. That's driving the cost side.

There is a unique thing about Connecticut which is that during the term of my predecessor in 2010, the state became the first to be federally approved to expand Medicaid to a larger group of low-income adults. The state's implemented a large portion of the national changes coming through the Affordable Care Act in 2014 and we have tens of thousands of people currently covered.

Unfortunately, it's at a large cost to the state. In 2014, we'll recover 100 percent of the Medicaid cost and then under the federal system that will decline to 90 percent over time. But right now we're at traditional Medicaid reimbursement rates.

The cost predictions that the legislature and the governor agreed on in 2010 have been surpassed in the extreme to the point that that's an additional $95 million in expenditures. When you're trying to manage down to the dime, having expenditures like that are pretty dramatic.

For this program in particular, yes, 2014 [when 100 percent of new Medicaid expenses are reimbursed] will be good for Connecticut.

The state also sustained serious damage from Hurricane Sandy. What should the role of the states and the federal government be as you clean up and rebuild?

Connecticut is a well-insured state. We probably have one of the highest rates of insurance of all of the states, so by definition the federal government will pay less for damage in Connecticut than it will elsewhere.

The broader issue in the Sandy situation is determining, when you've proven that major economic centers are threatened by global climate change, what's the appropriate response and who needs to respond to that. At this point, it's entirely too big and too expensive for any local or state government to share the responsibility.

I think the biggest issue is infrastructure hardening, [making infrastructure more resistant to attacks]. That's where the governors of New York, New Jersey and me are in agreement that we can't afford to have major financial centers threatened this way without a federal response.

Last year, the legislature with your support abolished the death penalty. Has there been any political backlash against that decision?

I advocated for the repeal of the death penalty. There were two big political reasons that my election was as close as it was: I wouldn't change my position on the death penalty and I wouldn't rule out raising taxes because I knew that the size of our problem was too big, potentially too large to deal with without raising revenue.

We did some other criminal justice things: We decriminalized marijuana and we built in an anti-recidivism incentive system for people in prison to attend programs, get educated and pick up a trade. That's been controversial as well.

The Republicans ran against the Democrats in this last election on the basis that our anti-recidivism program was somehow dangerous. Most of the brochures were frontal attacks on it. But the legislature's membership was unchanged. The criticism didn't take.