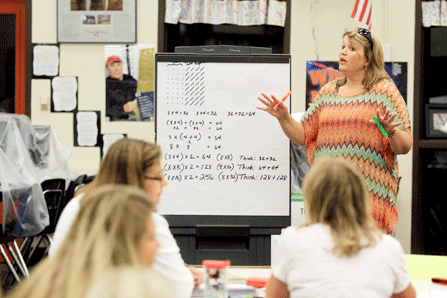 In Kentucky this year, the percentage of elementary and middle-school students who rated “proficient” or better on statewide math and reading tests declined by about a third. Kentucky high schoolers also experienced a double-digit percentage point decline in both subjects.

Those results may sound dismal, but they were better than state education officials had expected. Kentucky is the first state to tie its tests to the new national Common Core standards in English and math, and state officials had projected that the new, tougher standards could yield declines of as much as 50 percent.

Kentucky's experience is likely to be repeated in dozens of other states. Forty-five states have signed on for the Common Core in both subjects, while Minnesota has adopted them just for English. The standards, which were developed jointly by the National Governors Association and the Council of Chief State School Officers and released in 2010, are designed to be more rigorous than the current standards in most states, and to encourage deeper critical thinking.

Chris Minnich, incoming executive director at the Council of Chief State School Officers, says all 46 states are beginning to implement the standards, though few are as far along as Kentucky.

“Generally most of the states are in the information sharing and training stage with their teachers,” he says.

National standardized tests linked to the Common Core will be released in 2014, and Minnich thinks that many states will see dramatic changes that school year.

“I don't think people fully realize the challenges that will come when the reality sets in that so few of our kids are college and/or career ready,” former Florida Governor Jeb Bush said recently, speaking at an education conference in Washington, D.C. The conference was sponsored by the Foundation for Excellence in Education, which Bush created to promote some of the ideas he backed as governor, including early reading tests,  vouchers and charter schools.

“Moms and dads are going to be mad,” Bush said. “The reality is going to create problems for elected officials across the spectrum.”

Kentucky's Commissioner of Education, Terry Holliday, knew this year's results might cause a backlash from parents and students, so his department partnered with the state's Chamber of Commerce and the Prichard Committee for Academic Excellence, an education advocacy group in the state, to help get the message out to parents about what was in store.

“Everybody knew it was coming,” Holliday says.

In addition to the shock of the initial test results, there has been growing concern about whether implementation of the standards will reduce local control of schools and make it easier for the federal government to dictate what schools teach.

Proponents of the standards maintain they were developed by states without federal involvement.

“When we started this discussion with the chiefs and the National Governors Association, there wasn't anybody from the Department of Education in the room,” Holliday says.

But the Obama administration did provide incentives for states to adopt the standards through its competitive Race to the Top grant program and the waivers it granted to states seeking to avoid certain provisions of the No Child Left Behind law. In both cases states had to adopt college- and career-ready standards, such as the Common Core, though they had the option to develop their own alternative. The federal government also provided support for the development of standardized tests pegged to the standards.

However, Minnich doesn't think those federal incentives are the reason so many states have signed on for the standards.

“If I was sitting in a commissioner's position,” he says, “I wouldn't have done anything to get federal money if it wasn't the right thing for my state.”

But the perception of federal involvement in the Common Core has persisted, with political ramifications. Weeks before Bush spoke in Washington, an education chief he championed, Indiana Republican Tony Bennett, lost to a challenger, Democrat Glenda Ritz, who made it known she intended to raise questions about the state's adoption of the standards.

While it's unclear whether Ritz's stance on the standards actually swayed the election, Bennett saw it as a ploy to attract the support of Tea Party Republicans who have been skeptical of the standards.

“She was fairly direct in trying to curry favor with the ultra-conservatives,” he said, speaking the day after the election.

Ritz, who had been backed by the state's teachers union, defended her position, saying that teachers in the state felt as though they had not been asked for input on whether to adopt the standards.

“We're going to have to look at the Common Core,” Ritz said. “We need to be sure that we're on the right track for what Indiana wants.”

Two groups of states are working to develop competing sets of tests based on the Common Core standards. Ritz says she'd like to reconsider Indiana's participation in one of those groups and the terms under which it was issued a waiver for No Child Left Behind.

Political pressure already has led another state to pull out of one of the testing groups: In August Utah announced that it would no longer be participating in the Smarter Balanced Assessment Consortium.

Several months before Utah pulled out, its state Senate passed a resolution urging the State Board of Education to reconsider its adoption of the Common Core.

“My initial concern with the Common Core was the level of influence and control that would eventually come from the federal government,” says state Senator Aaron Osmond, who introduced the resolution. “Utah is a very conservative state, we're very concerned about what is taught in our schools.”

Osmond has since revised his view somewhat, and says he sees value in making it easier for states to compare academic performance and for students to move between states without falling behind.

However, he still believes Utah was right to leave the testing consortium, because now that it's less invested in developing one of the tests, it can be freer in deciding which of several Common Core tests to adopt. And while his position on the standards has softened, Osmond anticipates that there will still be several bills introduced in the state's next legislative session objecting to implementation of the Common Core.

There's been concern elsewhere about how the Common Core standards will affect what teachers teach. Ideally, the new standards would be implemented with extensive professional development for teachers, but there wasn't funding to support that in Kentucky – the education department worked to establish networks of teachers to train each other – and funding has been scarce in many other states still recovering from the recession.

Recently, English teachers have expressed concern about the push for more non-fiction, including government documents, in the curriculum. Ideally, that reading would be pushed across all subjects, including science and social studies classes.

In practice, though, English teachers across the country have reported that they've borne the brunt of the new emphasis on non-fiction, according to the Washington Post, in some cases sacrificing units on poetry to make room for the new material.

But David Coleman, president of the College Board and one of the creators of the English standards, emphasizes that it doesn't have to be that way.

“Fiction remains at the center of the Language arts classroom,” he said, speaking at Bush's education conference.

Coleman emphasized that schools will control how the Common Core is implemented, and how teachers teach it.

“Standards do not educate children, localities do,” he said. “If you have a common standard, what's exciting is that you have lots of different ways to get there.”