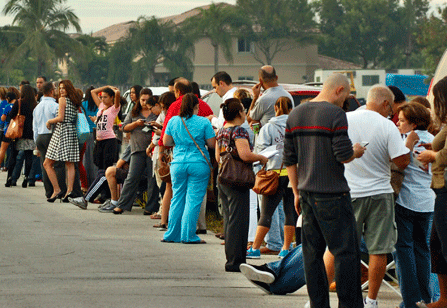 Voters wait to cast their ballots at precinct 697 in Miami-Dade County, Florida, on November 6. (Getty)

Call it the sentence that spawned a thousand ideas for election reform.

When President Obama stood on stage in Chicago last month delivering his victory speech, he thanked the millions of Americans who cast their ballots on Election Day. He especially noted those who “waited in line for a very long time” just to vote.

There's a lot to fix. Reports from diverse parts of the country detailed all sorts of problems at polling places. Ballots were misprinted, poll workers were unclear about certain laws or regulations and long lines greeted many voters at the polls.

In some parts of Virginia, voters reported waiting as long as four hours to cast their ballots. Florida was worse. Some voters in Miami encountered lines seven hours long, according to local news accounts. Florida's secretary of state, Ken Detzner, promised to dispatch staff on “fact-finding” trips to areas that saw long lines, failed ballot counts and other malfunctions.

As soon as Obama called for change, election reform advocates saw an opportunity. The president was vowing to address a long-standing flaw in the American voting system, just after a campaign year that saw more focus on election administration than any before it. The country's haphazard way of casting ballots was finally on Washington's agenda.

But the opportunity for change also comes at a time when Washington's authority over the states – and in particular over state election law – is under increasing fire. Some see an expanded federal role as the best path forward, while others are vehemently against it. How those differences are resolved will determine the shape of election administration throughout the country for years to come.

Already, even a relatively modest U.S. Senate proposal is being seen by some as a political minefield. Senator Chris Coons, a Democrat from Delaware, introduced the FAST Voting Act, which would provide federal grants to states that have drawn up detailed proposals to ease registration, expand early voting and solve Election Day problems at the polls.

But early voting and easier registration are ideas that Republicans in many places have fought against in recent years, and monitoring how the federal grant money is spent and which reforms are enacted would inflame existing tensions in many states. “The problem is who's making the decision,” warns Doug Lewis, of the National Association of Elections Officials. “When Congress engages in these issues, rarely is it with benign interest.”

Still, many see increasing Washington's role as the only way to fix a broken system. Some, like law professor Rick Hasen of the University of California, Irvine, have long advocated nationalized federal elections, complete with federal voter registration and a national voter identification card. “Ideally, I'd like the U.S. elections system to look a lot like the systems in other mature democracies,” he says. “But I have no illusions that this is happening anytime soon.”

With that in mind, many have set their sights lower. “A mixture of carrots and sticks could be used,” Hasen says. “Certainly, carrots are something that states would prefer over sticks.”

But if history is any indication, no matter the policy, local officials are likely to approach any new federal election law— carrot, stick or otherwise — with caution at best and cynicism at worst. And with the federal deficit at the top of the agenda in Washington, any proposal to add spending will face an uphill climb. “I don't see the federal government saying they're willing to take on another $1 billion of elections costs,” Lewis says.

One way around that problem would be for election reformers to concentrate on changes at the state level, weighing in on federal proposals when they arise. “With federal changes,” says Jenny Flanagan, director of voting and elections for Common Cause, an advocacy group, “it's a real heavy lift.”

For the Brennan Center at New York University, which has emerged as a key voice agitating for changes around the country, bypassing or trying to defuse disputes between federal and local officials is still seen as the best way to proceed. “The voters are best served when both are working together,” says Myrna Perez, senior counsel in the Brennan Center's Democracy Program. “Our system works best when everyone is working toward a common goal.”

The story of HAVA

Such cooperation, though, has been hard to come by.

Differences over local control are part of what led to the failure of the last Washington-driven attempt at election reform. In 2002, Congress passed the Help America Vote Act, a measure setting minimum standards for states to reach in addressing some of the more egregious shortcomings in the 2000 election.

But by most accounts HAVA, as the act is known, has proven woefully inefficient. It established the Election Assistance Commission, which currently has all four of its commissioner positions standing vacant and has no executive director, either.

“Basically, HAVA got rid of punch cards,” says Karin Mac Donald, director of the Election Administration Research Center at the University of California, Berkeley. Otherwise, it accomplished little. “There was so much variability on the local level,” she says.

That variability – both in the enforcement of HAVA's changes and in the conduct of elections in general – is at the root of much of the problem around the country. Standards on everything from poll workers and polling places to ballot length vary wildly from state to state.

HAVA was meant to address that. But it simply wasn't tough enough, voting experts say, and it lacked clear, mandated goals for what elections should look like. “It seems there are always so many attempts to please everybody,” Mac Donald says. “There have to be some kind of teeth.”

But the partisan divide over how best to run elections has never been deeper. A positive reform to some is an attack on state and local authority to others. The Republican governors and state legislators who support strict voter identification requirements see them as a reform. Opponents see the same laws as thinly disguised attempts at voter disenfranchisement.

The question of how to add “teeth” to election law is bound to raise the same disagreements about what is and is not a “reform.” “States' rights really come up strong in this area,” says Bonnie Glaser, a research specialist who works with Mac Donald.

The sharpest “teeth” Washington currently has are located in Section 5 of the Voting Rights Act, which gives the Justice Department preclearance authority over election changes in jurisdictions with a history of discriminatory voting practices. But the Supreme Court may soon strike down that authority. Those jurisdictions subject to it argue they're unfairly burdened, and more generally opponents argue it violates states' constitutional rights.

The case currently before the Supreme Court involves Shelby County, Alabama, one of the jurisdictions subject to Section 5. The county argues that the provision inhibits its ability to make even noncontroversial changes to its election administration procedures.

Still, supporters say, any changes adopted in the wake of the 2012 malfunctions would benefit from a strong enforcement mechanism. But would states acquiesce? “Probably not,” Mac Donald says, “because who wants more oversight?”