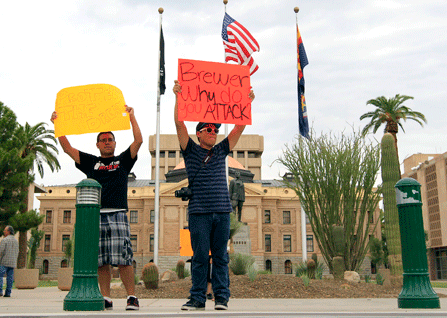 Joshua Montano, left, and Francisco Luna protest in front of the Arizona Capitol the day after Governor Jan Brewer's executive order denying driver's licenses to young immigrants who qualify for deferred action under federal law. A handful of states joined Arizona in the policy, but more than a dozen announced they would issue the licenses. (AP Photo/Ross D. Franklin)

Only three states let illegal immigrants drive, but the Obama administration's decision to stop deporting some undocumented students, veterans, and recent high-school and college graduates will give them driving privileges in more than a dozen additional states.

Most of the states did nothing on their own to grant the immigrants driving privileges—California is the only one that changed its laws to explicitly permit the expansion. On the contrary, officials in a handful of the affected states have scrambled to block the licenses from being issued, prompting a political backlash in Michigan and yet another immigration-related lawsuit in Arizona.

The practice of granting driver's licenses to illegal immigrants has become rare in recent years, and the issue had dropped off most legislative agendas before the federal action thrust it into states' laps once again. And it is reemerging as states close in on a January 15 deadline to comply with Real ID, a federal law signed by President George W. Bush that was aimed at tightening license restrictions.

The new licenses are a consequence of President Obama's decision this June to all but end deportations of illegal immigrants younger than 31 who are veterans, students or recent high-school or college graduates. Under the program known as Deferred Action for Childhood Arrivals or DACA, these immigrants can work in the United States if they arrived in the country when they were younger than 16, have been here for the preceding five years, have no major criminal convictions and pay a fee of $465. Individuals can get a two-year deferral and then must apply again.

The federal government gives successful DACA applicants work authorization forms and Social Security cards. DACA does not directly address driver's licenses. But in more than a dozen states that do not currently allow illegal immigrants to drive, those two documents are enough under state law to qualify for a license.

To date the federal government has approved 53,000 people for DACA, and close to 250,000 more have applied. The Migration Policy Institute estimates as many as 1.76 million immigrants are eligible.

Officials in the following states confirmed that illegal immigrants who qualify for the federal Deferred Action for Childhood Arrivals program can also qualify for driver's licenses:

Officials in the following states announced that DACA recipients will not qualify for driver's licenses:

Tanya Broder, an attorney with the National Immigration Law Center, says allowing immigrants to get licenses is an important part of achieving the goal of fully integrating them into their communities and the economy. “Certainly, in places like Arizona, the ability to drive is essential,” she says.

But Janice Kephart, an attorney with the Center for Immigration Studies, which seeks to curb both legal and illegal immigration, says DACA and states' reaction to it undermines the Real ID law, which passed in 2005. The states are supposed to comply with the law's rules for secure licenses by January 15. Kephart argues illegal immigrants need more than just paperwork to get licenses under the law; the immigrants must also be in a federal immigration database identifying them as being in the country legally, she says. States that do not use the extra step, Kephart says, are not obeying Real ID and could expose themselves to fraud.

But, she adds, states may be reluctant to buck the Obama administration on immigration, after the federal government sued Arizona — and largely won — over the state's 2010 anti-immigration law. “I don't really blame the states for this at all,” she says. “How could you? They've gotten no support from the feds.”

The federal government has not taken sides in the dispute, and so far it has declined to weigh in on whether DACA specifically authorizes states to issue driver's licenses to immigrants who qualify for the program, or whether Real ID prohibits them from doing so.

The first test of those competing theories could come in a Phoenix courtroom.

Arizona Governor Jan Brewer announced, on the day the federal government began accepting applications for the program, that her state would not issue driver's licenses to the newly authorized workers. The federal document they receive, she said, “does not evidence lawful, authorized status or presence.” Arizona law requires that applicants for a driver's license must show “proof satisfactory to the department that the applicant's presence in the United States is authorized under federal law.”

But the American Civil Liberties Union and immigrant groups sued to force Arizona to let the young immigrants get licenses. They argue that Arizona had accepted the same forms of identification to grant licenses for other groups. They say the state is overstepping its bounds by trying to regulate immigration and is illegally treating immigrants who qualify for DACA differently than others in similar situations.

“The singling out of DACA grantees appears to reflect disagreement with President Obama's DACA policy, an intent to target these noncitizens on the basis of their alienage or immigration status and a rejection of their federal authorized presence,” the groups wrote in their lawsuit.

A similar argument is brewing in Michigan, where Republican Secretary of State Ruth Johnson's office also barred immigrants who get documents under DACA from obtaining driver's licenses. Spokesman Fred Woodhams says a 2008 Michigan law requires license holders to be in the country legally. The deferred action paperwork, he says, is not enough. “It makes clear to everyone that they are not in the United States legally. It is simply deferring deportation action against individuals.”

Robert Ficano, a Democrat who is the elected executive of Wayne County, objected. He and several civil rights leaders sent a letter to Governor Rick Snyder asking him to reverse Johnson's actions. Ficano argued that Johnson's order could run afoul of state and federal laws.

In contrast, California lawmakers explicitly authorized the state to issue licenses to DACA qualifiers this summer. The state is already issuing licenses to them, although it is not tracking how many immigrants have received licenses.

Illinois lawmakers are poised to go one step further. The Hispanic vote was a big reason why Democrats in Illinois built their majorities in both the House and Senate in the November elections. The lopsided results spurred several Republicans to rethink their opposition to driver's licenses for illegal immigrants, an issue that has languished in Springfield since Obama served in the state Senate early in the last decade.

Advocates for immigrants hope they can finally pass a law achieving that goal before the new class of lawmakers takes office in January. This week, Senate easily passed a measure, 41-14, with bipartisan support that would allow immigrants to get temporary driver's licenses, which would look different from those carried by citizens and legal residents. (Utah has a similar set-up.) The Illinois House could take up the measure early next month.

In the meantime, though, young immigrants in Illinois who qualify for deferred action can get the same licenses as their American friends, because they will receive all the necessary documents, says Dave Druker, a spokesman for the secretary of state's office.

Texas, too, will issue licenses, although at first it looked like it would not. It is second only to California as the home of the most applicants for deferred action. Governor Rick Perry is a border hawk who nonetheless defended granting in-state tuition for illegal immigrants in his presidential campaign.

Perry sent a letter to all state agencies in August reminding state workers that the federal program “confer(s) absolutely no legal status whatsoever to any alien who qualifies for the federal ‘deferred action' designation.” But a few days later, the Texas Department of Public Safety confirmed that those immigrants would, indeed, be eligible for licenses.