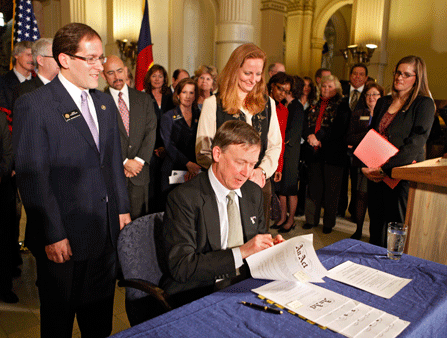 As mayor of Denver, John Hickenlooper's signature achievement was persuading more than 30 mayors in the metropolitan area to agree to a new rail transit system. As a candidate for governor, rather than run negative ads against his opponents, the Democrat's first ad showed him taking a shower to wash away his disgust at negative advertising. Since being elected governor in 2010, Hickenlooper helped negotiate an agreement between energy companies and environmentalists on new disclosure rules for oil and gas drilling. He also collaborated with state workers to overhaul the state personnel system.

After making a career out of compromise, Hickenlooper will face a new challenge come January: governing under conditions where compromise may not be necessary.

In November, Democrats won the Colorado House away from Republicans and held their majority in the Senate. In doing so, they achieved every state party's aim: to hold the governorship and both houses of the legislature simultaneously. But for governors, especially ones with moderate inclinations, one-party control can come with headaches and hard choices.

When legislative power is divided, as it was the last two years in Colorado, any bill that makes it to the governor has to be the product of a bipartisan compromise. In contrast, when their own party rules the legislature, governors sometimes have to pick between disappointing their allies and diminishing their reputations as conciliators — all because legislators of their own party send controversial bills to their desks.

More governors will soon have to make these types of choices. After the elections, 37 states will have one party with united control, the most since 1952.

For Colorado Democrats and for Hickenlooper too, one-party control presents a tremendous opportunity. Legislation that couldn't possibly have passed the Republican House — on taxes, social policy and environmental regulation — will now have a shot. But, like other governors in one-party states, for Hickenlooper that opportunity also entails political risks.

Republican governors such as Tennessee's Bill Haslam and Michigan's Rick Snyder know those risks well. While Haslam was focusing on the economy and the budget the last two years, the Republican legislature sent him legislation on controversial social issues such as evolution and abstinence-only education.

Snyder has worked well with his fellow Republicans in the legislature on a variety of issues, but they have also forced him to make hard decisions on voter I.D. and domestic-partner benefits. The legislature may soon take up an explosive bill to make Michigan a right-to-work state, even though Snyder has frequently labeled the idea as needlessly divisive.

Yet nowhere, perhaps, are the perils of one-party rule clearer than in Colorado itself.

When Bill Ritter was sworn in as governor on January 9, 2007, Democrats held the Colorado House, Senate and governorship simultaneously for the first time in 44 years. It took the party exactly one month to mess it up.

One of the legislature's first acts under Democratic control was to pass a bill to make it easier for workers to unionize. Ritter, who, like Hickenlooper four years later, ran as a moderate, vetoed it a month later. After working to elect Democrats, organized labor felt betrayed.

Ritter spent much of the next four years mediating disputes between businesses and labor groups, without ever satisfying either side. The Democratic legislature stoked the flames by sending Ritter more pro-labor bills, some of which he also vetoed. With his approval ratings sagging and unions threatening to withhold support, the governor announced in January 2010 that he wouldn't seek a second term.

With Republicans in charge of the House, Hickenlooper's first two years in office were very different than Ritter's four. Polls show twice as many Coloradans approve of the job Hickenlooper is doing than disapprove. The governor has vetoed only two bills, neither on hot-button issues.

Last year, the budget passed with only five dissenting votes total between the two chambers. Leaders from the Colorado Association of Commerce and Industry and the Colorado AFL-CIO — organizations that clashed during Ritter's tenure — both say their groups have a good relationship with the governor.

Some Republicans do, too. Even on the legislature's most divisive day of the last two years, when debate over a bill to allow same-sex civil unions ground legislative business to a halt, Hickenlooper, a former brewpub owner, shared a paper cup of bourbon with Republican House Speaker Frank McNulty. “I'll tell you this,” says Mark Waller, the incoming Republican leader in the House, “I like the governor a lot. I think he's a good person and he's incredibly thoughtful in his approach to policy.”

Whether Republicans will like Hickenlooper quite as much after two years with his party in power remains to be seen. With Hickenlooper's support, legislative Democrats are expected to quickly approve civil unions and in-state college tuition for some undocumented immigrants.

On other topics, though, Democratic legislators and the governor may not agree. After the mass shooting in an Aurora, Colorado movie theater in July, some Democrats are expected to push gun-control measures. Hickenlooper has said he doubted tougher gun laws would have prevented that violence.

Then, there's oil and gas drilling. Hydraulic fracturing—“fracking”—has boomed in recent years in populous Northern Colorado. Now, that boom is creating a backlash, because of concerns about potential water pollution and other environmental effects. One city, Longmont, even voted to ban fracking entirely in November, likely prompting a state lawsuit.

The Colorado Oil and Gas Conservation Commission is currently updating drilling regulations. If the commission doesn't take a harder line on fracking, many Democrats believe the legislature should. One proposal from environmentalists would bar drilling within 1,000 feet of homes and 1,500 feet of schools and hospitals.

Hickenloooer has appeared in radio ads for the Colorado Oil and Gas Association arguing that fracking is safe. “John Hickenlooper I think is, without a doubt, the most pro oil and gas Democratic governor in America,” says Pete Maysmith, the executive director of Conservation Colorado.

Mike Cerbo, the executive director of the Colorado AFL-CIO, says his organization's legislative agenda is still being developed. Business groups are worried about the possibility of bills to make workers compensation more generous and to give preferences in state contracting to businesses that offer more generous benefits.

But how much controversial legislation will actually end up getting to Hickenlooper is an open question. Democrats' legislative majorities are narrow. Mark Ferrandino, the incoming speaker of the House, points out that his caucus includes people with diverse views.

Nor are Democratic legislators setting out to put the governor in a difficult position. “We're going to push for what we think is right,” Ferrandino says, “but we're going to do that in partnership.”

Still, after spending two years mostly insulated from legislative controversy, it's easy to see how united control could come with challenges for Hickenlooper, as it did for Ritter. “Everybody believes that's the case,” says State Senator Greg Brophy, a potential 2014 gubernatorial candidate for the Republicans. “Everybody.”

But political dangers or not, at least one Coloradan is quick to say that life won't be so bad for Hickenlooper with Democrats running the legislature: Bill Ritter himself.

Ritter points out that while the Democratic legislature burdened him with a handful of controversial bills, that's only part of the story. Under Ritter's leadership, Colorado lawmakers raised hospital fees to expand Medicaid to cover 100,000 more people. They raised car registration fees to pump hundreds of millions of new dollars into transportation. They required utilities to produce 30 percent of their energy from renewable sources by 2020. And, they expanded gay rights.

Every one of those bills received few Republican votes and would have had a much harder time passing if Republicans had held the majority. “There have been a lot of people saying that it's going to difficult on John Hickenlooper to have Democrats in control of both houses,” Ritter says, “but I think the upsides are much, much greater than the downsides.”

Ritter's experience shows that even when legislative allies help cost a governor his popularity, they can still enable him to enact big plans. And Hickenlooper may have big plans for the next two years.

One may involve resolving a constitutional mixed message that has long confounded Colorado policymakers. The state's Taxpayers Bill of Rights, approved by voters in 1992, limits growth in state spending to the rate of inflation, adjusted for population growth. Amendment 23, approved by voters in 2000, requires education spending to increase by at least the rate of inflation every year.

How can overall spending always stay down, education spending always go up and the state have any money left for other services? A commission appointed by Hickenlooper reported last month that the amendments, and a third that limits property taxes, “required the impossible.”

Hickenlooper hasn't decided how to fix this, but possibilities include a tax increase, broader tax reform or constitutional changes. Any of those moves would surely be controversial and risk the governor's high approval rating. They would also be much more likely to pass in a Democratic legislature than one where Republicans have a portion of power.