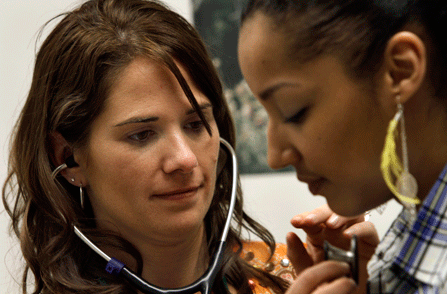 BUCKINGHAM COUNTY, Virginia – Most people in this rural logging area have only one choice when they need medical care: the Central Virginia Community Health Center. On most days, at least 200 people show up at the center seeking treatment for maladies ranging from sore throats to depression to cavities.

The health center typically has four doctors on duty, but the clinical director, Dr. Randall Bayshore, says his staff would never meet local demand if it weren't for the two nurse practitioners who provide the same care, to the same number of patients, as the doctors.

Buckingham County is one of roughly 5,800 U.S. communities, with about 55 million residents, that have a shortage of primary care physicians. In these places, many residents are forced to forgo regular checkups and treatment for chronic diseases such as hypertension and diabetes — harming their overall health.

In 2014, when the new federal health care law extends insurance coverage to 30 million more people, the doctor shortage is likely to get worse. Anticipating this, states and the federal government are offering repayment of medical school loans and other incentives to encourage newly minted doctors to practice primary care in needy areas.

But efforts like these take years to pay off. So as an additional step, states are trying to loosen decades-old licensing restrictions, known as “scope of practice laws,”  that prevent nurse practitioners from playing the lead role in providing basic health services.

Nurse practitioners, registered nurses with advanced degrees, are capable of providing primary-care services such as diagnosing and treating illnesses, prescribing medication, ordering tests and referring patients to specialists. But only 18 states and the District of Columbia currently allow nurse practitioners to perform these services independently of a doctor.

A 2010 Institute of Medicine report, “The Future of Nursing,” cited nearly 50 years of academic studies and patient surveys in concluding that primary care provided by nurse practitioners has been as safe and effective as care provided by doctors. But efforts to change “scope of practice” laws to give nurse practitioners more independence have run into stiff opposition.

Organized physician groups, which hold sway in most legislatures, are reluctant to cede professional turf to nurses. Arguing that nurse practitioners lack the necessary level of medical training, they insist that it is unsafe for patients to be treated by nurse practitioners without a doctor's supervision.

Some doctors also have a financial incentive to limit nurses' independence. Often carrying heavy medical school loan debt, they can be loath to see their revenue diverted by competing health care services, particularly those with lower fees. The Federal Trade Commission has weighed in on legislative efforts to give nurse practitioners more autonomy in several states, arguing that physician groups have no valid reason for blocking such laws other than to thwart their competition.

Virginia is a case-in-point. After several failed attempts over the last decade, the legislature finally passed a nursing “scope of practice” law in 2011 that doctors and most nurse practitioners in the state say is a step forward. According to its authors, the aim of the law is greater patient access to primary care across the state.

Instead of requiring supervision by a doctor, Virginia's new law requires nurse practitioners to be part of a doctor-led “patient care team.” And instead of limiting doctors to overseeing just four nurse practitioners, the law allows them to work with up to six. Most important, it removes a requirement that doctors regularly work in the same location as the nurses they supervise. Instead, the statute allows doctors and nurses in separate locations to use telemedicine techniques to collaborate.

The American Medical Association and the American Academy of Family Physicians have called Virginia's first-of-its-kind law a model for other states that still require on-site doctor supervision of nurse practitioners.

According to Dr. Cynthia Romero, who was president of the Virginia Medical Society when it negotiated with the Virginia Council of Nurse Practitioners to create the law, “the turning point was when both sides realized that the primary focus had to be what was best for patients.” She says the new law is a step forward for patients and builds a bridge between doctors and nurses. “The road ahead is limitless,” she says.

Mark Coles, the chief negotiator for the nurse practitioners' council, is less enthusiastic but says the law represents progress. “It gives us a seat at the table in the legislature for future improvements,” he says.

But in certain parts of the state, nurse practitioners say the new law may be a step in the wrong direction. They worry about new language that requires them to consult with supervising doctors on all “complex” cases. Although rules scheduled to be released next month may clarify which cases are considered complex, some nurse practitioners fear the definition may be subject to differing interpretations.

The American Academy of Nurse Practitioners and other nursing organizations recently issued a position paper opposing the whole idea of requiring nurse practitioners to join a doctor-led team if they want to practice to the full extent of their training.

“We broadly support team-based care when it reflects the needs of patients, says Tay Kopanos, head of government affairs for the academy. But when a nurse practitioner can't bring her best efforts to a clinic without joining a doctor's team, Kopanos says, “we do not support it.”

About 300 miles southwest of Buckingham County – in the Appalachian Mountains where Virginia shares borders with Tennessee and Kentucky—the shortage of health care providers is profound. Working out of a converted recreational vehicle known as the Health Wagon, two nurse practitioners, Teresa Gardner and Paula Meade, do their best to serve a four-county region where idle coal mines have left many jobless and without health insurance.

The non-profit Health Wagon, started in 1980 by a Catholic missionary, has expanded its reach over the years to meet the growing demand of a population that is sicker than most in the country. But the steep and winding roads, often coated with heavy snow and ice in winter, make it dangerous and sometimes impossible to reach everyone in need.

But, Meade says, team collaboration could be dicey in the hollers of Appalachia. “I'd love to start every day with a multi-disciplinary team meeting,” she says. “Nothing would make me happier.” Driving a mobile unit along treacherous highways and seeing at least 45 patients every day in cramped quarters, however, doesn't leave much time for meetings.

What she and Gardner fear most is the requirement in the Virginia law that nurse practitioners consult their lead doctor on all “complex” cases. Gardner and Meade collaborate with each other throughout every day and they often seek advice from their volunteer supervisor, Dr. Joseph Smiddy, who at 70 years old, still has a day job practicing medicine across the border in Kingsport, Tennessee.

“Dr. Smiddy would murder me if I called him every time a complex case walked through the door,” Gardner says. “They're all complex. Most of them are train wrecks. I'd love to treat someone with a common cold.”

For his part, Smiddy says any law that would increase the pressure on nurse practitioners willing to work in remote mountain areas has got to be the wrong approach. He plans to ask his lawyer to review the statute to see whether it increases his own medical liability as a volunteer team leader.

He agrees that nearly all of the Health Wagon's cases are complex, no matter how the law defines that term. The area has a high incidence of COPD (chronic obstructive pulmonary disease), heart disease, diabetes, obesity, cancer, prescription drug abuse and mental illness. More than a few patients have 10 diagnoses, Smiddy says, and many are on 30 different medications.

“Teresa and Paula are brilliant doctors," Smiddy says. "They need to be a national example – a model for how to do it for the rest of the country… We're not ever going to have enough doctors willing to ride around in a mobile unit the way they do. They're the real deal. We need to do everything we can to support them.” he says.