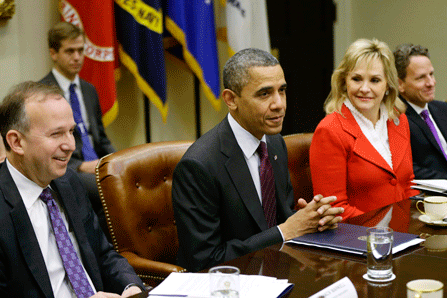 A bipartisan group of governors has called on Washington to find a solution —  any solution —  to the nation's budget woes as the federal government nears its so-called ‘fiscal cliff.'

“It's not acceptable to have failure when it comes to the fiscal cliff,” said Utah Republican Governor Gary Herbert, following a meeting Tuesday (December 4) with President Obama and five other governors. “We need the good people on both sides of the aisle to come together.”

The governors — three Republicans and three Democrats —  said they left the White House meeting feeling “encouraged” that Obama would strike a deal with congressional Republicans before December 31, the date that would trigger a series of spending cuts and tax hikes to deal with the federal deficit but that economists say would plunge the nation back into recession.

Governors in recent weeks have been have asked for a seat at the table in negotiations, which have huge impacts for state budgets. Should lawmakers fall over the cliff, the automatic $1.2 trillion in total federal spending cuts would shrink the share doled out to states.

Federal education funding would be cut by more than $1 billion, and cuts to federal grant programs for food and healthcare for women, infants and children would leave states filling the gap in services for their most vulnerable, as Stateline has reported.

Military states, notably California, Texas and Virginia, would be hit particularly hard from a 10 percent cut in defense spending.

Without a deal, Utah, for instance, could lose as much as $500 million in total anticipated revenue, Herbert told reporters. The resulting uncertainty would “create havoc” for states putting together budgets and seeking investment in the coming year, he said.

“We all know that businesses are more likely to invest when they have a greater sense of what is to come,” said Delaware Governor Jack Markell, a Democrat.

The governors refused to publicly support a specific plan. Obama's plan  would raise taxes by $1.6 trillion over 10 years by allowing tax rates on the top two percent of earners to rise, while the latest House Republican plan includes $2.2 trillion in spending cuts over 10 years and new revenue raised through a tax code overhaul. But talks with the president did turn to possible adjustments in the fiscal cliff scenario affecting the implementation of the Affordable Care Act.

“In Delaware,” Markell said, “we've made the decision to expand Medicaid based on the fact that there is higher federal reimbursement for the population that we're already serving. So clearly, if that rate were to change, we'd have to revisit our decision.”

The governors plan to submit policy recommendations to the Obama administration in the coming weeks, which will focus on streamlining federal spending while broadly advocating for states' interests.

“We don't need a cut on the federal level that merely requires a tax increase at the state level,” said Arkansas Governor Mike Beebe, a Democrat. “The states are willing to share in the sacrifice. We don't want to take it all, but we're willing to do our part.”