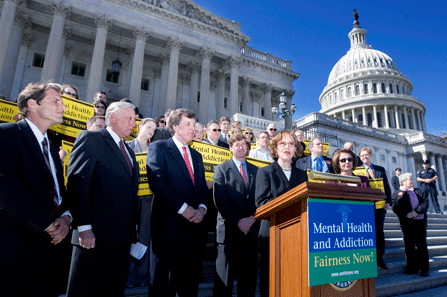 Former first lady Rosalynn Carter, at podium, spoke during a 2008 rally on Capitol Hill in support of the Mental Health Parity and Addiction Equity Act. (AP)

This article was updated  November 30 to include a statement from the U.S. Department of Health and Human Services.

Danielle Moles is anorexic, which in her case played out not only in a near-starvation diet but also in obsessive running. She ran during tornados. She ran in temperatures that fell to 20 degrees below zero and froze her ponytail solid. She ran a marathon with a stress fracture in her foot. She ran when she was supposed to be at birthday parties and bridal showers and family vacations. She ran until she literally passed out.

Even with all that exercise, Moles convinced herself it wasn't enough. She denied herself liquids to punish herself. She purged. She abused laxatives so frequently that she permanently damaged her digestive system and wore the enamel off her teeth. Her body rebelled in other ways as well: She stopped menstruating. She was persistently light-headed and nauseated. She began having seizures. One particularly awful night in 2008, she tried to end it all with a half-bottle of Ativan.

There were more consequences to her destructive behavior. She miscarried. Her marriage fell apart. Her career as a nurse foundered.

Doctors diagnosed Moles, now 32, with anorexia and depression, and prescribed long-term care in a residential psychiatric facility. But Moles' insurers said she wasn't covered for such care. About a year ago, her insurer finally agreed to pay for three months in an Illinois residential psychiatric facility. Those three months proved more effective than anything she had tried previously.  Eight months after Moles left the facility, her weight had stabilized at 120 pounds—only five pounds less than her doctors recommend—and she hasn't run in a year.

Moles doesn't understand why her insurance company resisted paying for the residential care she needed, especially because it would have covered lengthy in-patient care to recover from a stroke or heart attack. “I don't understand why mental health isn't as recognized as much as a physical condition,” she says. “This is just as debilitating.”

A Law but No Rules

Congress recognized that equivalence in 2008 when it passed the Mental Health Parity and Addiction Act, which requires insurers to cover mental illness and substance abuse treatment on an equal basis with physical ailments. The law, which passed with substantial bipartisan support, was supposed to eliminate two-tiered systems for co-pays, deductibles or treatment limitations.

The Obama administration's Affordable Care Act will vastly extend the reach of the 2008 law. The older law does not require health insurance plans to offer behavioral health coverage, although if they do it must be on par with benefits provided for medical and surgical care. But the ACA does require that all health plans sold on the soon-to-be-created state health insurance exchanges eventually offer mental health coverage. Those plans, then, will all be required to observe the federal parity act.

The problem, behavioral health advocates say, is that more than four years after President George W. Bush signed the parity bill into law, the Obama administration has yet to complete the federal rules that would enable states to enforce it.

As a result, behavioral health may actually have fallen further behind since passage of the law. In May, the U.S. Government Accountability Office released a report showing that health insurance plans have actually increased the number of exclusions for mental health and addiction treatments since the law was enacted. In 2010 and 2011, for example, 15 percent of the plans surveyed by the GAO were excluding residential mental health, a significant increase from 2008.

“Hundreds of thousands of Americans are being denied their rights under the federal parity law,” says James Ramstad, a former Republican congressman who originally introduced the House version of the bill in 1996 at the request of his friend and fellow Minnesotan, the late Democratic Senator Paul Wellstone, whose name is memorialized on the law. Wellstone was killed in a plane crash in 2002. “It took 12 years to pass that parity act and four years later, we still have no rules and therefore no enforcement,” says Ramstad. “It's unconscionable.”

Ramstad and another former congressman, Patrick Kennedy, whose father, Sen. Edward Kennedy, also championed the law after Wellstone's death, have been convening meetings across the country in which experts and patients — some of them of them soldiers returning from war in Iraq or Afghanistan — testify in support of the law. The motive of the meetings, Kennedy says, is to publicize the parity law and prod the Obama Administration to act.

Victoria Veltri, Connecticut's Health Advocate, agrees. She says pushing insurers to observe parity is difficult without the specific requirements federal rules would spell out. “It makes it very difficult to make arguments about whether the criteria the insurers are using pass muster or not.”

In a statement Friday responding to the story, the U.S. Department of Health and Human Services said that the federal parity act is currently effective for all plans covered by the law and that the interim rules issued in February 2010 “carry the full force of law.” The statement does not address the complaint of critics that those rules lack the specificity that would make state enforcement possible.

Some states, including Connecticut, Maryland, Maine, Oregon, and Vermont, have enacted strong laws to beef up coverage of behavioral health, but those statutes do not cover all health insurance plans, including those issued by the many large employers which insure their own workers.

Some other states, including Florida, have said they won't enforce the federal parity law unless their own states pass identical legislation. States that refuse to enforce the parity act after HHS releases the rules likely will face lawsuits from patients, as well as pressure from the Obama administration, which has the authority to enforce the law if the states do not.

Even without the final rules, the broad outlines of what parity will look like are relatively clear: Insurance companies will not be permitted to impose more restrictive spending limits on mental health or addiction benefits than they impose on medical and surgical benefits. They will not be able to limit the frequency or duration of mental health treatment more severely than they do for other forms of care, nor will they be allowed separate deductibles or more restrictive authorization rules.

Andrew Sperling of the National Alliance on Mental Illness says that even without final federal rules, insurance companies generally have eliminated separate deductibles and scrapped unequal spending limits. But Sperling and other advocates say insurers continue to disallow mental health and addiction treatments in non-hospital based facilities, and also to exclude types and levels of treatment for behavioral patients, while covering a full range of treatments for medical patients. They also say that behavioral health patients are often subject to reviews and criteria that are not required of patients on the medical and surgical side.

Substance abuse treatment advocates are particularly troubled by the requirement that people with addictions fail at lower levels of care before they are approved for more intensive treatments. They say the “fail first” requirement would never be tolerated for medical and surgical patients.

“It's a classic example of discrimination and a moral overtone that is a remnant of the past that still lingers,” says Beth Middlebrook, legal coordinator of Watershed Addiction Treatment Programs. “It comes from the belief that the alcoholic is a bad person as opposed to a person with a bad disease.”

Susan McClanahan, Danielle Moles' psychologist, is convinced that Danielle has paid a heavy price because of the unequal treatment accorded behavioral health patients.

“If she had been able to have a residential stay earlier,” says McClanahan, “the course of her illness would not have been so long.”

There might have been other benefits as well. Had Moles gotten the help she needed at the beginning, her treatment might have cost her insurers roughly $80,000 instead of the $500,000 to $750,000 she estimates they eventually shelled out. (Moles estimates she has paid $150,000 out of her own pocket.) She also might have avoided the physical ailments she has today that resulted from her mental illness, including seizures and chronic pain in her back and knees.

“I'm terrified that I won't have the life of normalcy I long for,” she says. “I want to have a relationship again. I want to have children. I want a profession and career that I love.”

She can't help wondering whether she'd already be living that life it if she had gotten the help she needed when she needed it.

In the West, GOP Governors, Skeptical of Cap-and-Trade, Will Watch California More States Dig into Libor Scandal
About Stateline
Stateline provides daily reporting and analysis on trends in state policy.
About Stateline
Media Contact
Grace Jensen-Moran
Senior Associate, Communications
202.540.6804
Sign Up
Sign up for our daily update—original reporting on state policy, plus the day's five top reads from around the Web.