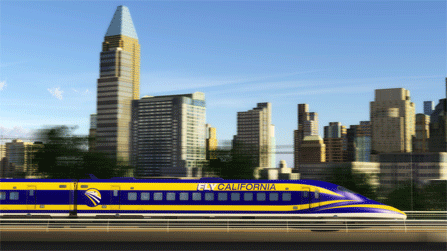 California's effort to build a high-speed rail line between San Francisco and Los Angeles — the largest public works project now underway in the United States — is picking up political momentum, but even supporters wonder whether it can stay on track to meet its goal by 2029.

The California High Speed Rail Authority has scored several victories in recent months. It earned legislative approval and $3 billion in bond proceeds to start laying tracks next year in the largely agricultural Central Valley. It avoided new political threats and emerged unscathed from the November elections. And Friday (November 16) the $68 billion project survived an initial legal challenge that could have halted work.

But the obstacles in its way are still very real. The authority that oversees the project is a relatively small agency that is still bringing top leaders on board. It recently pushed back key deadlines for the first phase of the effort, including the due date for contractors to submit their bids and the completion date for the first leg. Financing for later stages of the project is still up in the air.

“This is a very expensive and very large construction project,” says John Chalker, the vice chair of a peer review group created by California law to keep an eye on the project. “This type of construction has not been built in the United States before.”

While U.S. engineers have worked on similar projects overseas, they have not had to do it under the tight deadlines imposed on the California project. The one that looms largest is the one that comes at the end of September 2017. That is when the state must be finished using its federal stimulus funds, which make up the bulk of the $3.5 billion California has received from the federal government to build high-speed rail. The state is matching that with state bond money, approved by voters in 2008. The goal of the initial stage is to build a 135-mile segment from Madera to Bakersfield.

“I would not want to have to bet that they will have 135 miles of track laid by September 2017,” Chalker says.

California received an unexpectedly large share of stimulus money for high-speed rail after Republican governors in Florida, Ohio and Wisconsin rejected federal grants obtained by earlier administrations. The federal government redistributed the money to states like California that wanted to go ahead with their plans.

The influx of money is good news for California planners, even though it means they will have more to get done by the stimulus deadline. But the state will still have to find another $38 billion (more than half of the project's estimated overall cost) to make the high-speed rail network a reality.

Planners hope they can get some more money from the federal government. President Obama and his administration championed high-speed  rail in the 2009 stimulus package and in subsequent budgets. With Obama in the White House and Democrats controlling the U.S. Senate, there may be a slight chance that the federal government could offer more money for high-speed rail to states such as California.

But Republicans still control the U.S. House, and one of the chief antagonists of California's high-speed rail there is U.S. Representative Darrell Issa, from the San Diego suburbs. Even if Republicans went along with the idea of high-speed rail, infrastructure money has been in short supply on Capitol Hill in recent years. The Highway Trust Fund, which pays for most surface transportation, has repeatedly run out of money, and federal lawmakers have been loath to raise the gas tax to make up the shortfall.

California Governor Jerry Brown, a Democrat, has floated the idea of using proceeds from polluters to pay some of the high-speed rail bill. California is rolling out a cap-and-trade system that requires polluters who release greenhouse gases to buy credits from the state at auctions. Those auctions could bring in between $660 million and $3 billion next year alone.

Another option could be a public-private partnership, says Rod Diridon, the executive director of the Mineta Transportation Institute at San Jose State University.

“I think you're going to see private industry come in with a major investment in order to be able to share the profit from the system once it's in operation,” he says. Diridon, who was appointed last week to chair the advisory board of the U.S. High Speed Rail Association, says investors will become more interested in the project once they see construction underway, because they will be reassured that the state will complete it. The rail authority assumes it will get a fifth of the money it needs to build the network from private capital.

Trains versus planes and automobiles

For many Californians, traveling between Los Angeles and the San Francisco Bay Area means taking one of two freeways: Highway 101 near the coast, or Interstate 5, a faster inland alternative. A trip on Interstate 5 can take six hours. An Amtrak rail trip takes twice as long. By comparison, a flight between Los Angeles and San Francisco takes 1 hour and 20 minutes, plus the time it takes to get to the airport, check bags, clear security and board.

So the idea of a bullet train moving at speeds of more than 200 mph and taking passengers from downtown L.A. to downtown San Francisco in two hours and 40 minutes sounds attractive — but it also strikes some as California dreaming.

To many, however, it feels like a necessity. The state's population continues to grow, even far from the coast, increasing the demand for more transportation options but making it harder to build them.

Under California's latest plan, rail passengers would start to see improvements even before the bullet trains debuted. The high-speed rail agency responded this spring to widespread criticism about ballooning costs and unrealistic assumptions. Its latest business plan calls for its trains to share tracks and rights of way with existing commuter rail services at the “bookends” of the route. That would cut down on costs and improve existing rail service.

In fact, Amtrak or other passenger rail could reduce travel times between the two cities to six hours even before the high-speed trains come on board, which would make train travel a competitive alternative to driving, says Daniel Krause, executive director of Californians for High Speed Rail. When the bullet trains start running, he says, they will make rail competitive with flying.

“You may have heard of this ‘Train to Nowhere,' but that's completely bogus,” he says. “Whatever track is built, we will be able to use to benefit the existing rail system. It's not going to be an isolated section of track.”

Current plans call for Sacramento and San Diego to be connected to the high-speed rail network in its final phases.

Construction is scheduled to start next year on the first segment of track, but several complications could delay or even derail the project.

First, there are lawsuits that could stop it altogether. Local governments and landowners have sued claiming that the state's environmental impact studies are faulty. A trial judge declined Friday to stop the state's planning process, but a full trial is scheduled for spring. Other lawsuits over the price the state must pay for land it takes are also likely.

In such a major undertaking, there are “hundreds” of complications that could arise, says Chalker, of the peer review group. Agreements with the freight railroads of Union Pacific and BNSF could be very difficult to negotiate, he says. And just securing all the necessary permits from local, state and federal agencies could be cumbersome.

But Diridon, from the Mineta Institute, remains optimistic. “In the early 1930s, the Golden Gate Bridge in California had 2,300 lawsuits against it,” he says. It was opposed by the mayor of San Francisco, opposed by the governor at that time, opposed by all sorts of other leadership.”

Illinois Democrats Seek Driver's Licenses for Undocumented Immigrants Which States Are Most Innovative?
About Stateline
Stateline’s team of veteran journalists provides daily reporting and analysis on trends in state policy.
Learn More
Media Contact
Jeremy Ratner
Director, Communications
202.540.6507
Sign Up
Sign up for our daily update—original reporting on state policy, plus the day's five top reads from around the Web.