The idea of trying to gauge a state's “innovativeness” strikes some as a flawed exercise. The word innovation seems to connote success, but as everyone knows, some innovation leads to failure. Critics question the validity of crediting a state for being innovative just because it's quick to jump on a new idea, regardless of the policy's particular merits.

Still, the issue of state innovation has long interested political scientists and the subject is experiencing a resurgence among scholars. The underlying question is why some states are quick to adopt new policies while others usually hold back and let their neighbors test the waters. In order to be convincing, this type of analysis requires setting aside value judgments and simply looking at patterns of behavior.

In 1969, a seminal study by researcher Jack Walker set forth an “innovation index” by which American states could be judged on adoption of new policies sooner or later than their counterparts. Walker's index evaluated states based on when they adopted each of 88 policies relative to the first and last states to pass similar laws.

The index was influential in the years following its publication, but the concept was eventually abandoned by political scientists in favor of more focused analyses of how individual policies spread throughout the states over time. “What that led to was a situation where we knew a lot about specific policies, but that specific information came at the cost of being able to make some generalizations about true differences across the states,” says Frederick Boehmke, associate professor of political science at the University of Iowa.

Now Boehmke and colleague Paul Skinner have attempted to resurrect the concept of “innovativeness” as a general trait of American states with an ambitious new study in State Politics & Policy Quarterly. The researchers built a database of 189 policies that states adopted between 1912 and 2009—ranging from seatbelt laws to licensing requirements for beauticians—and created an “adoption rate” measure that assesses states based on how many of the universe of possible policies they've adopted at each point in history. The result can be used to judge how innovative states are relative to one another and how their willingness to innovate has varied over time.

Boehmke and Skinner find that states vary significantly in their proclivity to innovate and that their collective appetite for innovation has steadily increased over time. Overall, California is the most innovative state while Mississippi is the least innovative. “California was always a fairly innovative state, but it has become even more so,” Boehmke says. “It's not only first but it's first by a large margin. It's 50 percent more innovative than the second most innovative state.”

The study notes that many of the other front-runners — such as Florida, Illinois, Colorado, Minnesota and North Carolina— emerge as regional leaders surrounded by less innovative “followers.” Comparing the first period of study (1912-1958) to the second period (1959-2009), Pennsylvania, Michigan, Arkansas and North Dakota became significantly less innovative while Arizona, Florida, Iowa and Texas demonstrated increasing willingness to innovate.

Boehmke and Skinner found “waves of innovation” apparent across the country during particular periods and recent points in time. “Innovativeness doubles shortly after World War II,” Boehmke says. “We see a huge expansion in the things that states are doing.” Many of the other waves of innovation also coincide with well-known historical eras, including the Depression-recovery period of the 1930s. Lulls in innovation often occur near the beginning of the era while peak innovation often occurs near the end.

A relatively recent wave of innovation began in the New Federalism period that started in the 1980s and has continued in most states through the 2000s. The authors conclude that these waves of innovation are driven by a mix of new policies and a critical mass of policies “whose time had come” and were quickly adopted by a range of states. 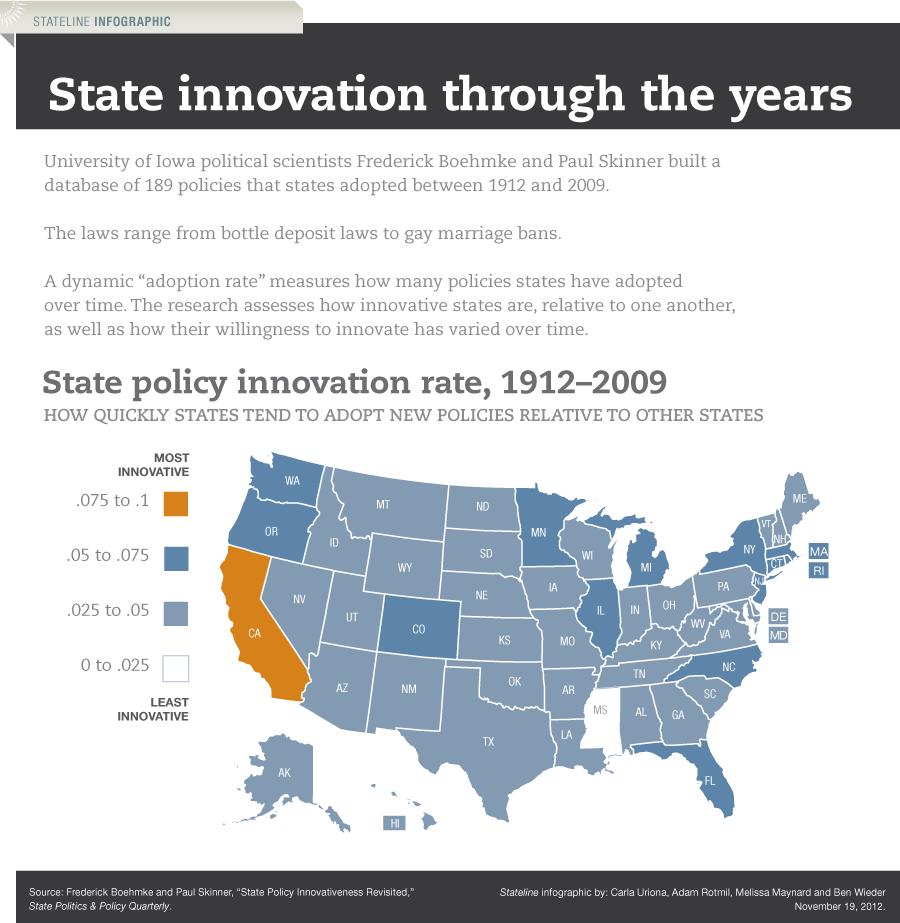