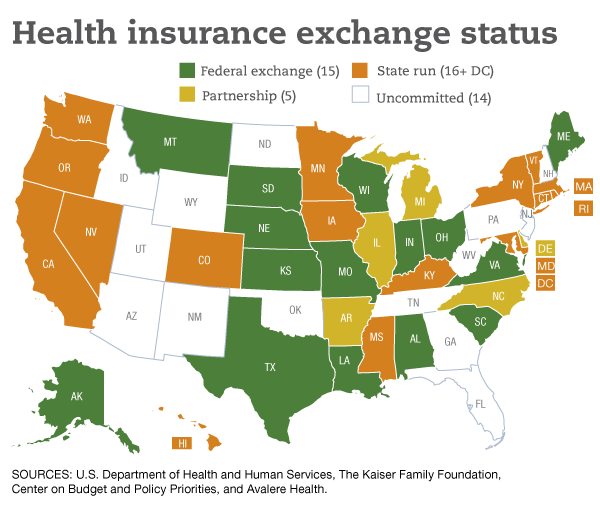 With one day left before states were required to notify Washington if they wanted to form their own health insurance “exchanges,” the insurance marketplaces authorized by the Affordable Care Act, U.S. Health and Human Services Secretary Kathleen Sebelius granted a one month extension yesterday. She said states will also have to submit detailed exchange “blueprints” at that time.

Since postponement of the deadline came at the last minute, this week was marked by a flurry of announcements from governors about how they intended to run their exchanges. The deadline for states to commit to partnering with the federal government is still set for February 15, 2013, according to a letter from Sebelius to the Republican Governors Association.

At stake is how much control a state will have over the exchange within its own borders — a lot, some, or none. If governors were to react as they typically do in federal-state matters, most would be loath to cede control over their insurance markets to the federal government, and would want to take credit for any goodwill the exchanges may generate with advocates, insurance companies and ordinary citizens.

But like nearly everything else connected with the Affordable Care Act, the decision is complicated by politics. So far, only 15 states and the District of Columbia have chosen to create and operate their own exchanges. And only two of the 15 have GOP governors.

Mississippi's insurance commissioner, who is a Republican but was not appointed by the governor, announced this week that the state would run an exchange, although GOP Governor Phil Bryant denounced that decision. Governor Brian Sandoval of Nevada, also a Republican, signed a law authorizing a state exchange and is expected to notify the U.S. Department of Health and Human Services today that his state will run its own exchange.

At least two other Republican governors also may opt to form state–run exchanges. New Mexico Governor Susana Martinez said this week that since her state has already done much of the groundwork, she might commit. Another red state, Utah, already runs an insurance exchange for small businesses and is expected to announce that it will create one for individuals.

The nation's 29 GOP governors (soon to be 30) have uniformly opposed the Affordable Care Act as a whole. Nevertheless, in addition to those making their decisions recently, several others have broken ranks over the exchanges in the past. By promoting competition and expanding consumer choice, they have acknowledged, the exchanges conform to some core GOP principles.

But some supportive governors were thwarted by the opposition of GOP state lawmakers. Others delayed action, hoping the Supreme Court or a President Mitt Romney would make the difficult decision go away.

In anticipation of this week's deadline, one of the law's most vocal opponents, Florida Governor Rick Scott, indicated he would rethink his position now that the health law appears to be here to stay. Similarly, Tennessee's Republican Governor Bill Haslam said for the first time that he would consider running a state exchange.

At this point, states that have made little or no progress in creating their own exchanges are unlikely to be able to complete the complex undertaking before October 1, 2013, when exchanges in all states are supposed to go live for open enrollment. The health law requires most people to have health coverage starting January 1, 2014. Under the law, HHS must certify that states are ready to operate their own exchanges by January 1, 2013, two weeks after they submit their plans.

States opting out of running an exchange on their own still have time to decide if they want to run an exchange in partnership with the federal government. Arkansas, Delaware, Illinois, Michigan and North Carolina already have notified HHS that they would like to enter an exchange partnership. Several other states appear to be leaning in that direction.

To most consumers, there won't be much difference between federal- or state-run exchanges. Either way, the exchange will be governed by the same set of insurance requirements. For example, carriers will not be able to set lifetime limits on coverage or refuse to cover people with pre-existing health conditions, and the premiums they can charge older subscribers will be limited. The plans offered will have to include the same minimum health benefits defined by the health law, and they will have to observe the same limitations on deductibles and co-pays that can be charged to consumers.

Standard or custom made

However, states that run their own exchanges or enter partnerships will have great latitude in determining how insurance companies can best address the needs of their particular populations. For example, a state may decide that because it has a large percentage of citizens with diabetes, it will require all insurers in its exchange to include a diabetes management plan in their policies.

States that choose to run their own exchanges or partner with the federal government also will be able to decide which plans to include, and how to publicize the new system. By contrast, federal exchanges will have only limited capacity to tailor their offerings to the particular needs of each state.

“If the idea that government that's closest to the people is going to be more responsive to the needs of the people [is correct], that argues for states creating their own exchanges,” Jost adds.

There is also a broader reason to retain control, says Alan Weil, executive director of the National Academy for State Health Policy. “The big upside for a state to run its own exchange is that it can fit into that state's bigger agenda of reforming the cost, quality and delivery of health care,” Weil says.

But there are reasons other than politics that might deter a state from creating its own exchange. After 2015, the exchanges will no longer receive federal support. Although the federally run exchanges are designed to be self-sufficient, collecting fees from the insurance plans that participate, some states worry that a state-run exchange would need a continuing infusion of state funds.

Alabama's Republican governor Robert Bentley, for example, was one of only a few in his party to push for a state-run exchange all along. But when it came time for a final decision this week he backed off, saying he feared that future costs would place an unfair burden on state taxpayers.

And finally, a number of Republican governors simply do not believe that the exchanges will work at all. “If you fundamentally think it's not going to work,” says Weil, “why put your heart and soul into it?”

Edmund F. Haislmaier, health policy analyst at the conservative Heritage Foundation, argues states have everything to lose and nothing to gain by operating their own exchanges. “I don't think the administration will get any more states declaring state-only exchanges,” he says. "The politics aside, there really isn't any reason for a state to do this.” Opting to run an exchange, Haislmaier says, is like agreeing to be a vendor for the federal government. The basic rules are already set.

Which States Are Most Innovative? Despite Governor's Push, Puerto Rican Statehood Unlikely
About Stateline
Stateline’s team of veteran journalists provides daily reporting and analysis on trends in state policy.
Learn More
Media Contact
Jeremy Ratner
Director, Communications
202.540.6507
Sign Up
Sign up for our daily update—original reporting on state policy, plus the day's five top reads from around the Web.