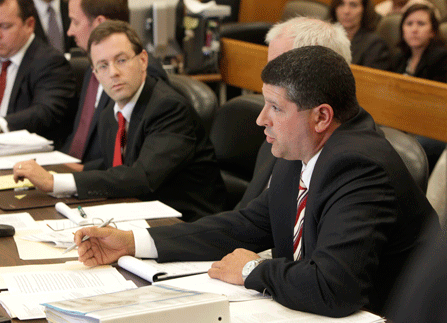 Gary Winuk, an attorney for California's Fair Political Practices Commission, argues in Sacramento Superior Court that Americans for Responsible Leadership should be required to disclose its donors. (AP)

When an Arizona group called Americans for Responsible Leadership donated $11 million in mid-October to a California political action committee, it aroused the suspicion of California's Fair Political Practices Commission, which sought to determine the source of the group's money.

But even after the California Supreme Court ordered disclosure of the donors, the commission didn't get much of an answer.

Americans for Responsible Leadership reported that the $11 million had come from another Arizona group called the Center to Protect Patient Rights, which in turn had received the money from an organization based near Washington, D.C., called Americans for Job Security.

The commission was unequivocal in its assessment of what was happening. “They were money laundering,” says Ann Ravel, chair of the commission. “They admitted that.”

The groups are part of a wave of non-profit organizations, most of them classified by the IRS under section 501(c)4 of the federal tax code, that have ramped up their involvement in political campaigns since the Supreme Court's 2010 Citizens United decision. Nationally, the Karl Rove-affiliated Crossroads GPS and the liberal Priorities USA are two of the many 501(c)4 organizations that collectively have spent more than $300 million this election cycle to influence federal elections, according to the Center for Responsive Politics, almost four times what they spent in 2008.

These kinds of organizations have always been able to spend freely during election season, as long as political activity isn't “primarily” where their budget goes, but the Citizens United ruling allowed them to fundraise virtually without limit, lifting caps on the size of donations they could accept from corporations and unions.

Current tax and campaign spending laws don't require these organizations to disclose their donors at the national level, but nothing in the Supreme Court's 2010 ruling prevents states from requiring that disclosure. Still, as the California case and disputes in Idaho, Maine and Montana have shown, the rules governing the political activity of non-profit groups are still a work in progress.

“Many states don't have any rules about this kind of disclosure,” Ravel says. “I think more and more are now looking at it.”

While the case in California was unfolding, a different but related dispute was playing out in Idaho.

A new group called Education Voters of Idaho made a $200,000 donation to a political action committee that shared the same address. The money went to television advertisements supporting a series of education laws that were up for review on the November ballot. That caught the attention of Secretary of State Ben Ysura.

The Education Voters group was created as a 501(c)4 organization and said it intended to remain involved in lobbying on education issues after the election. It pointed to IRS rules for 501(c)4 groups as evidence that they didn't have to disclose their donors, since only a portion of the money raised was intended for use in the election. That's not how Ysura saw it.

“They met the definition of a political committee under our law, regardless of what the tax people thought,” he says. “Our state laws are not repealed by the IRS tax code.”

A state district court agreed, requiring the group to reveal its donors and emphasizing a provision of the state's campaign finance laws preventing donations “through an agent, relative or other person in such a manner as to conceal the identity of the source of the contribution.”

Education Voters ultimately disclosed that it had received $200,000 from New York City Mayor Michael Bloomberg and $250,000 from Idaho-based Albertsons heir Joe Scott, among others. The group initially indicated that it might appeal the decision to the state Supreme Court, but founder John Foster now says that it's trying to move on, particularly since defeat of the education laws that it favored has increased the need for education-related advocacy during the next legislative session.

“Our focus is on education reform,” he says, “not fighting with the Secretary of State.”

Days after Foster's group revealed the names of its donors, a Montana judge ordered release of the financial records of a Colorado-based non-profit organization that had been involved in Montana campaigns.

To Derek Cressman, vice president of state operations for Common Cause, a group that advocates greater campaign finance transparency, the Idaho and Montana rulings were examples of “states having success piercing this c4 veil of secrecy.”

For James Bopp, an Indiana-based lawyer who was part of the successful Citizens United legal challenge and has represented a number of non-profits in campaign finance disputes, the rulings were anything but a success. “Whenever you require disclosure,” he says. “you will chill political speech.”

Bopp interprets the Citizens United decision as requiring that non-profit groups complete detailed, one-time statements that list contributors who spend money on elections. But requiring these non-profits to file as political committees is overkill, he says, and listing donors who didn't specifically contribute for a particular cause is misleading to voters.

It can be even more misleading, Bopp says, if the non-profit is involved in multiple states, as is the case with the National Organization for Marriage, a national group opposed to same-sex marriage that has been involved in a three-year dispute with the Maine Ethics Commission about whether it needs to disclose its donors.

For Bopp, who was part of NOM's legal group in the early stages of the case, the answer is clear.

“It would be ridiculous to call them a Maine political committee,” he says.

The National Organization for Marriage gave $1.93 million in 2009 to a Maine PAC working to repeal the state's same-sex marriage law. That constituted the bulk of the PAC's funding, according to the Ethics Commission. Under Maine law, groups that raise or spend more than $5,000 to influence a ballot measure election can be considered a state ballot question committee, particularly if the money was raised specifically for the ballot question.

While the organization doesn't deny that some of its e-mails to potential donors mentioned its political work in Maine, it says they didn't bring in more than $5,000 and that the organization actively discouraged its donors from earmarking funds for particular causes.

Forcing the group to disclose donors in Maine, says NOM President Brian Brown, would require it to make judgment calls on which donors intended their money to be used in the state. “I'm not a mind reader,” Brown says.

He sees the Maine case, and campaign finance challenges the group has faced in other states, as evidence of discrimination against his group. “One of the areas that the other side is using to intimidate us is campaign finance laws,” he says. “You can win this fight without going to battle if you scare enough people into not speaking.”

He insists that groups supporting same sex marriage, such as the Human Rights Campaign and Freedom to Marry, aren't challenged to reveal their donors. For its part, the Human Rights Campaign, which did make donations above $5,000 in Maine, says that it has set up separate PACs in states where it is involved politically to show where specific campaign donations have come from.

“If we tell our donors that their funds are going to be used for a particular state's ballot activity,” says Darrin Hurwitz, assistant general counsel at HRC, “those funds go into our PAC and get reported.”

What the situations in Maine and California demonstrate is that the growing involvement of national and out-of-state non-profit organizations in state elections will continue to present challenges for state campaign finance agencies.

Frank Daley, executive director of the Nebraska Accountability and Disclosure Commission, says states are limited in terms of what they can require of national groups.“They have no office in the state,” he points out. “They have no agent in the state.”

He thinks the only long-term solution to the problem will be a uniform national approach, perhaps through the IRS or congressionally mandated reporting.

Otherwise, Daley argues, it will be easy for groups that wish to shield their donors to establish organizations elsewhere to filter the money. “You can always hide in a different jurisdiction,” he says. “No one state is ever going to be able to deal with the problem.”