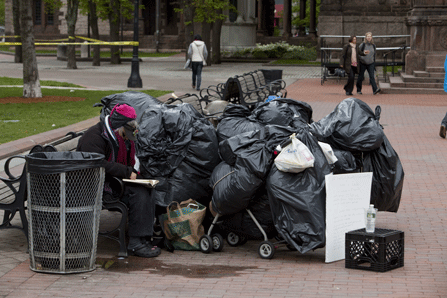 A homeless woman sits surrounded by her belongings on a bench in Boston's Copley Plaza. (Getty)

It was an ill-considered cocktail that put Adam Petrullo on the streets. He was living in a drug halfway house in Boston's South End, undergoing methadone treatment for heroin addiction. Methadone makes heroin unappealing to addicts, but there are ways to mix commonly prescribed medications — a drug “cocktail”— to boost methadone's effects to near heroin-like intensity. Petrullo tried it.

He had just weeks to go before graduating from the halfway house, in line to get housing of his own, but this was a deal-breaker. “I was a complete mess,” Petrullo says. “There was no hiding it. They knew.” A quick drug test and he was handed his few belongings and pointed toward Boston's emergency homeless shelter a few blocks away.

Petrullo, who is now 27, spent the next three years drifting from shelter to shelter, using drugs heavily. He landed repeatedly in the hospital after blackouts and overdoses. But those hospitalizations, paid for by Medicaid, qualified him for one of the country's most interesting social experiments.

Boston's “HUES to Home” program puts chronically homeless people who are “High Users of Emergency Services” into housing. In August, Petrullo moved into a neat, sparsely furnished apartment on the ground floor of a modest frame house in Boston's Roslindale neighborhood.

If Petrullo is like the relatively few people who have come before him in the program, stable housing will help him stay out of the hospital, saving the state thousands in Medicaid dollars. But the truly revolutionary aspect of HUES to Home is the way Massachusetts plans to expand it so it can serve more people: private investment.

The state has authorized up to $50 million to pay back investors in a few years with a modest level of interest, but only if the state sees the savings it expects. The up-front money most likely will come from a mix of philanthropic donors and private investors seeking some social impact from their funds. The $50 million pot will be shared among HUES to Home, a related program focused more broadly on the homeless, and an entirely different effort aimed at preventing juvenile offenders from landing back in prison.

It is the first state-led, rubber-meets-the-road test of a concept referred to in Massachusetts as “social innovation financing” but known more broadly by the label of “social impact bonds.” Despite minimal real-world experience — a two-year-old effort in Peterborough, England, to cut prison recidivism — the idea has seized the imagination of state policy makers around the country.

There are several advantages to the financing approach. It mobilizes private capital to scale up programs states can't afford to expand themselves, reducing taxpayers' financial risk. It also requires rigorous measurement of results. According to supporters, that last piece may be transformative.

That is precisely what attracted Jay Gonzalez, the Massachusetts secretary of administration and finance, who put the state on this path. “We need to hold the people with whom we contract and to whom we give grants accountable for getting the results we expect,” he says.

Though Massachusetts is the trailblazer, other cities and states are embarking on similar experiments. New York City has launched a social impact bond effort, with the up-front capital coming from Goldman Sachs, aimed at stemming youth recidivism. In 2011, the Minnesota legislature approved $10 million for a program piloting “Human Capital Performance Bonds,” known as HUCAPs. They would be aimed at expanding proven workforce development programs, and unlike the Massachusetts initiative they are designed to be true bonds, sold to market-rate investors. But the legislature used a mechanism to create them that got caught up in a legal challenge, leaving HUCAPs in limbo until recently. On October 31, the Minnesota Supreme Court ruled that the legislature's approach did not run afoul of the state constitution, in essence letting the state move ahead with the idea.

Meanwhile, other states have been preparing to compete for a slice of $20 million in so-called “pay for success” funding from the U.S. Department of Labor. The money would go to pay back private investors in workforce development programs that successfully place clients in long-term jobs.

Massachusetts, though, is the first state to experiment with the essence of the idea, from estimating potential savings to evaluating and paying for results. “We're creating something from whole cloth, and it's hard,” says Gonzalez. “But we have over 6,000 fewer state employees than before the recession, less resources, and no diminution of demand. We need to think outside the box and try new things.”

It's not hard to see why the state would pay attention to HUES to Home. Over eight months in 2009 and 2010, the Boston Health Care for the Homeless Program (BHCHP), tracked Medicaid reimbursements for 35 homeless people who were frequent visitors to the Boston Medical Center, which is in the city's South End, amid a constellation of shelters and halfway houses. They averaged $104,000 per person over that time. “And that,” says Dr. Jessie Gaeta, BHCHP's medical director, “is absolutely an underestimation. It used the records for only one hospital, and these are folks who use four to five hospitals around Boston.”

As it happens, Gaeta had already helped start an effort that has shown great promise—a “housing first” strategy coordinated by the Massachusetts Housing and Shelter Alliance (MHASA) aimed more broadly at the chronically homeless. Unlike earlier approaches, which sought to get homeless people off drugs or alcohol before getting them housing, “housing first” programs do the opposite. “There's an utter chaos that is present when you are experiencing homelessness,” says Gaeta. “Housing gives you a safe, stable place, and there's a stabilizing force in meeting this very basic survival need.”

Once they have housing, people in the program need less high-end medical attention and other services. “Their costs radically change, and their utilization of resources changes dramatically,” says Joe Finn, MHASA's executive director.

MHASA's Home and Healthy for Good program has served more than 600 people since it launched in 2006. Before entering the program, the people in it cost the state an average of about $33,500 a year in Medicaid, shelter and jail or prison costs. But once they are in stable homes, they average just over $8,600, plus roughly $15,500 in program costs – yielding savings to the state of almost $9,500. For every 100 chronically homeless people the state can house, it saves almost $1 million.

Not surprisingly, the benefits are even greater when the homeless people in question use the hospital a lot. A study of the first 10 people in HUES to Home found that emergency-room visits, EMS calls and hospital admissions all dropped substantially once they had housing. Overall, the study estimates, the state saved some $50,000 a year per person.

Those are eye-catching numbers. “The key is to what extent does a social intervention, usually by a nonprofit, create economic value for a stakeholder, usually a municipal or state government or the federal government?” says Steve Rothschild, who launched a workforce development organization in Minneapolis-St. Paul and is a driving force behind Minnesota's HUCAPs. If the intervention boosts income or sales taxes, or reduces state spending on child care, health care, housing, or prisons, then “to the extent you can measure these things, you can reward them,” Rothschild says.

Even though bringing private capital into the equation is an untried strategy, the people charged with raising it have found high levels of interest in the foundation world, especially among so-called “impact” investors who are willing to take less than market-rate returns in exchange for some social good. “There's a thirst to redefine finance as a positive engine in society, so a lot of financial institutions are interested in this,” says Tracy Palandjian, CEO and co-founder of Social Finance US, which is based in Boston and is helping New York State with its bid for Department of Labor money.

The challenge will be proving that the programs are producing real savings. This is not as daunting as it used to be. Overholser points out that the existence of large state databases and the techniques to mine them have made possible measurements that used to be too expensive to pursue. “All we had in the past,” he says, “was snapshot evaluations, but not movies. Now, with the data that is thrown off by government in the course of business, we can watch the needle, like it's a movie. So for the first time you can build a contract that says, ‘Did you move the needle?'”

Nevertheless, judging outcomes can be difficult. Massachusetts has some specific metrics for its homelessness contract: Do people in the program remain housed? Are the state's Medicaid expenses going down? Have participants avoided run-ins with the law? But it also has long-term goals. “Ultimately the goal is that people achieve some level of economic self-sufficiency and can remain stably housed by the end of the program,” says Ryan Gillette, part of a team from Harvard's Kennedy School of Government that is advising the state on the project. The state is close to finishing its negotiations on the juvenile recidivism contract, says Gillette; then it will turn its attention to details of the homelessness effort.

Palandjian notes that Massachusetts has had to absorb significant upfront costs to set up its program. The question is whether it will grow large enough to justify the investment. “Scale really matters,” she says. “This only works if we can create a financial market for social outcomes, and more people can be served, and there are standardized practices and a government template that bring development costs down. And we're not even at the first stage of that, yet.”