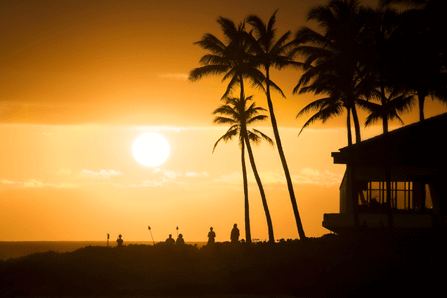 Solar is surging in Hawaii. There's no disputing that.

Solar power installations have sprouted all across the islands, helping the state move toward its ambitious renewable energy goal and adding some 2,000 “green-collar” jobs to local economies. The projects account for an estimated 15 percent of all construction statewide.

Hawaii more than doubled its solar capacity between 2010 and 2011, making it one of the top 10 solar producers nationally. That's an impressive feat for a small state whose solar industry barely existed as recently as 2006.

“This is the revolution we've been expecting,” says Jeff Mikulina, executive director of the Blue Planet Foundation, a group that promotes renewable energy in Hawaii. “It's exciting to see photovoltaic on homes and rooftops statewide.”

The growth is especially good news in a state that spends roughly $4 billion each year on imported oil, and whose residents are socked with big monthly utility bills, the nation's costliest. Those who install solar panels on their homes can shave hundreds of dollars off those bills.

Sparking Hawaii's solar boom is a state tax credit that ranks among the nation's most generous: Homeowners and businesses that install a photovoltaic system may take 35 percent of its cost straight off their tax bill. That's in addition to a 30 percent federal credit.

But the unexpected popularity of the solar incentive has opened a hole in the state budget and become a major topic in state politics.

During the 2010 tax year, Hawaii residents claimed $42.8 million in renewable energy credits, mostly for solar projects. In just six months of 2011, they claimed $54.9 million in credits, according to data provided to Stateline by the Hawaii Department of Taxation. This year, the price will soar to $173.8 million, the state estimates. That's out of an overall state budget that hovers around $12 billion each year.

“Everybody is pretty much on board with this clean energy,” says Jack Suyderhoud, a University of Hawaii economist and vice chair of the state's Council of Revenues. “But people are starting to ask, at what price?”

Hawaii's experience illustrates the challenges states face as they look to shift away from fossil fuels and towards low-carbon options. Though such policies may pay future dividends through reduced utility bills, improved public health and minimized climate impacts, states are stuck with heavy short-term costs that shrink resources for other programs.

As federal support for renewable energy dries up, thrusting even more responsibility upon states to keep the renewable sector afloat,  states under fiscal stress may face more dilemmas of this kind.

Of the 24 states that offer renewable energy tax credits, several have already had to deal with larger-than-expected fiscal impacts.

In 2011, Oregon repealed a credit that worked too well, at one point costing 40 times its projected price tag. Over five years, the state's Business Energy Tax Credit spurred huge growth in the state's wind industry, but even its supporters admit it subsidized large-scale projects that would likely have gone forward without the state incentive.

Oregon has continued investing in renewable energy, but it has shifted its focus to policies that receive more scrutiny, such as revolving loans for small-scale projects and reverse auction grants for larger utilities.

Meanwhile, in oil-guzzling Louisiana, the number of solar installers has grown from a mere handful in 2007 to almost 200 today, according to Tucker Crawford, executive director of the Gulf States Renewable Energy Industries Association. And that's in a state that has no renewable energy standard.

“Because of our aggressive tax credits, we've seen phenomenal growth,” says Crawford, who, spurred by the credit, left a job at an LED manufacturer for a career in solar power. “I wouldn't be in business without the Louisiana solar credit.”

No tax credit is more generous than Louisiana's: 50 percent or up to $12,500 on wind or solar projects. But its cost has soared to 18 times the state's original $500,000 per-year projection, a problem uncovered by a legislative committee that's reviewing each of the state's major tax programs.

What accounts for solar sticker shock? Part of the problem rests with the initial cost projections themselves, made quickly and haphazardly.

“How do I know how many people would put a solar system on top of their house?” asks Greg Albrecht, chief economist of the Louisiana Legislative Fiscal Office. “I'm just guessing.”

Albrecht says his short-staffed office usually gets 300 to 400 tax credit bills to analyze every two years, and he can only assign two or three people — often with little deep knowledge of the targeted industry — to a given subject. Analysis generally consists of a couple of phone calls, in search of information from industry representatives.  Sometimes there is data — objective or not — and sometimes there isn't.

In Hawaii, the projections weren't poor; they were non-existent. Hawaii is the only state that doesn't require independent fiscal analysis of spending bills. Though state law established an office for such analysis, the legislature hasn't funded it.

But there's more to the story than just poorly researched cost estimates. In Hawaii, tax officials are worried that some people are ramping up costs by claiming too many credits.

The original language in Hawaii's solar tax credit law equated a system to the number of its inverters, the important components that convert a solar panel's frequency for use by home appliances. Typically, that was one per household.  The definition didn't anticipate the arrival of more efficient — and plentiful — micro-inverters, which are wired in strings to a circuit breaker.

Beginning in 2009, taxpayers who purchased micro-inverter systems began to file several claims, either in hopes of capitalizing on the outmoded definition, or out of mere confusion.

“The rule broke down completely,” says Mark Duda, vice president of the solar firm RevoluSun and the former president of the Hawaii Solar Energy Association. “We were getting calls all over asking for advice.”

Amid the uncertainty, the Department of Taxation has been flooded with new claims, arriving in multiples from many taxpayers. “It's like the wild west,” says Mallory Fujitani, the department's spokesperson, who inherited the mess in 2011 with incoming Governor Neil Abercrombie. In 2010, the department released new tax guidelines, which solar advocates contend still didn't solve the problem.

This past Friday, the department released another set of guidelines that it hopes will clarify the definition once and for all. The new document defines a system based upon its output capacity. “We need to make it easier for (solar installers). We think this should be able to provide the certainty,” Fred Pablo, the department's director, told Stateline.

Duda, the solar energy advocate, says the state's shaky administration of the solar credit has held back further growth. Along with other solar activists, he worries the tax department could change the rules again at any time, hindering investment. “I would have a hard time advising someone to go and invest here,” he says. “It's just too difficult.”

To be clear, $173.8 million is what Hawaii thinks its credit will cost this year. It's the highest and most recent of several estimates, meant to guide the governor in putting together the state's next biennial budget. State economists admit there's no way to be sure of the program's cost, either for this year or in the future.

In fact, Hawaii can't even be sure how many solar installations exist on the islands. “I just don't know why we don't have the capacity to do this,” says Suyderhoud, of the Council on Revenues.

The Hawaii Department of Business, Economic Development and Tourism calculated the $173.8 million figure by rounding up county-issued permits for solar installations. But county-level data is often unreliable and hard to sift through — some of it is recorded by hand, says Eugene Tian, a department analyst tasked by the governor to keep reviewing the solar incentive's impact.

That method may overstate the true number of installations because not all permitted projects go forward and some might be finished in later years. But the state lacks a better method to collect such data. Utilities aren't required to report it.

Even if the $173.8 million projection eventually proves too high, it could still mean fewer resources budgeted for schools, social services or other programs in a state that has yet to fully rebound from the recession. That's because the governor must have some number — any number — to plug into the next budget.

“I think policymakers have made their best estimate, but there are so many variables and so many competing interests that it's just too difficult to predict,” Governor Abercrombie said in a response to Stateline. “In the end, though, we have to ask ourselves: Is this simply a good policy? And so far, I think the answer has been yes.”

Hawaii's legislature is likely to examine the credit when it reconvenes in January. “At this point, everything's on the table,” says Senator Mike Gabbard, who chairs the Energy and Environment Committee. Gabbard, as well as several solar advocates, note that a production-based credit, similar to some federal incentives, could help the state spread budget impacts over several years.

Few expect the solar-friendly legislature to make drastic changes to the incentive, but the emergent solar industry remains on edge. “All we really want is clear rules — to see what the future's going to be,” Duda says. “Just don't do it in a way that's going to tank the system overnight.”