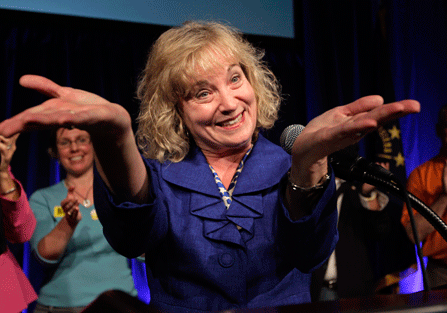 No state has ushered in more education changes over the past four years than Indiana. The Hoosier State instituted an A to F grading system for schools, linked teacher evaluations to student performance, scaled back teacher tenure and created one of the nation's broadest private school voucher programs.

Those changes attracted national attention for the state's Republican superintendent of public instruction, Tony Bennett, and more than $1.3 million in donations for his re-election campaign this year. But on Tuesday voters delivered a surprising and decisive victory to his Democratic challenger Glenda Ritz, who had vowed to move away from what she described as the state's “pass-fail approach” to evaluating students and schools and had won the support of the state's teachers union.

“This was a true referendum on the direction that education should be headed in Indiana,” she says.

Her win was one of the many highlights for teachers' unions, and organized labor more broadly, on Election Day.

Voters in South Dakota and Idaho repealed education laws that tied teacher pay to performance and did away with tenure, among other changes. Michigan voters repealed the state's emergency manager law, which gave gubernatorial appointees broad budget-cutting powers in fiscally distressed cities and school districts.

In California, the unions defeated a ballot proposal that would have hindered their political fundraising. They also counted two victories and a lead in the three gubernatorial races they were most involved with, along with success in legislative chambers in Minnesota, Maine and New Hampshire.

Organized labor didn't compile an undefeated record on Election Day: Over union opposition, voters in Washington State appear to have approved charter schools for the first time (the vote isn't final yet), and Georgia voters cleared the way for more charter schools in their state. Republicans won back control of the Senate in Wisconsin, which had briefly been in Democratic hands after labor-fueled recall elections in June. And in Michigan, voters rejected constitutional protections for collective bargaining. But those defeats were the exceptions.

“There was strong pushback across the country [Tuesday] night against efforts to rein in public employees unions,” says Jennie Drage Bowser, an expert on ballot measures at the National Conference of State Legislatures.

Karen White, political director for the National Education Association, says the results in Indiana, Idaho and South Dakota were a sign that education changes in those states were made too quickly and without sufficient input from teachers and community leaders.

“We now know that voters believe in local control for public schools,” she says. “People do not want a top-down approach to education.”

That sentiment was particularly evident in Idaho. Union leaders and opponents of the broad education laws passed in 2011 say Superintendent of Public Instruction Tom Luna didn't sufficiently engage with teachers and the public in crafting three sweeping education laws. The laws constrained collective bargaining, did away with tenure, created performance pay for teachers, required students to take online classes and put laptops in the hands of every high school student in the state.

“This vote sends a message to elected officials that they have to be accountable to the public,” says Mike Lanza, head of the group that opposed the laws. He says he hopes to build a coalition of teachers, parents, legislators and community members to determine how best to change education in the state now that the so-called “Luna Laws” have been repealed.

In a statement released Wednesday, Luna said the laws were "critical" to meeting the needs of students in the state, but he acknowledged the need to address the concerns of voters in figuring out a new course for improving education. “I am committed as anyone to finding a way to make this happen,” he said. “We must find a way because our children's future is at stake.”

Tuesday's results reaffirmed the political clout that teachers' unions still wield in many states. Much has been made of the growing influence of the self-described “education reform” groups such as the Michelle Rhee-led StudentsFirst and Stand for Children, among others. But while those groups have had success lobbying legislatures, pushing them to support some of the legislation up for review Tuesday, success in the biggest education races this year belonged to the unions.

“Unions are powerhouses,” says Michael Petrilli, executive vice president at the Thomas B. Fordham Foundation, an education think-tank that supports many of the policies that were up for review Tuesday. “The reform groups are still playing catch-up.”

Tony Bennett's Indiana campaign received donations from some of the biggest supporters of education reform in the country, including Wal-Mart heiress Alice Walton, billionaire financier Eli Broad and New York City Mayor Michael Bloomberg. But his opponent, and the Indiana State Teachers Association, still out-campaigned him, he says.

The union says it called on each of its members to spread the word about challenger Glenda Ritz to at least 20 people they knew and encouraged them to use social media.

“They ran a very effective, sophisticated ground game,” Bennett says. “They used every tool in their arsenal very well.”

Tuesday's state election results were a little more mixed for the broader labor movement, though generally positive. “At the state level, our primary goals were to ensure that we did not have the election of people who are continuously hostile to the public sector and to public workers,” says Steven Kreisberg, director of collective bargaining for the American Federation of State, County and Municipal Employees. “I think we were largely successful in achieving those goals.”

Unions invested heavily in legislative races in Minnesota and Maine, where they helped Democrats take over control of both chambers in each state. Unions view wresting control of the GOP-controlled Maine legislature as a particularly important victory because of Republican Governor Paul LePage's vocal animosity toward labor. “Having a Democratic majority is extremely important as a check on Governor LePage,” Kreisberg says.

The Maine governor has been embroiled in battles with state worker unions since almost the moment he took office, as Stateline has reported. Key controversies have included ordering the removal of a mural depicting the history of the labor movement from a state office building and publicly calling a large proportion of state workers “about as corrupt as you can be.” The legislature has been more restrained, but has considered a number of measures that make unions nervous, including a “right-to-work” bill that would make it illegal to require workers to pay union fees as a condition of their employment.

Right-to-work legislation also played a role in legislative and gubernatorial elections in New Hampshire. The New Hampshire legislature has passed right-to-work legislation in the past two legislative sessions, but didn't have the votes to override Democratic Governor John Lynch's vetoes. The Republican gubernatorial candidate vying for Lynch's job, Ovide Lamontagne, pledged to pass a right-to-work measure as a way to stimulate the economy, while Democratic candidate Maggie Hassan opposed such a measure on the grounds that it would lower wages and the standard of living. Hassan's victory and the Democratic takeover of the New Hampshire House likely will remove the issue from the state's agenda for the immediate future.

Unions also scored a few high-profile ballot-measure victories. In California, a top priority for labor was the defeat of a ban on using payroll deductions for political purposes. The measure also included a ban on direct contributions by unions and corporations to candidates or their committees, though unlimited indirect expenditures would have still been permissible.

Opponents successfully persuaded the electorate that the measure's ban on corporate payroll deductions was deceptive because the rules would have crippled unions—which rely on payroll deductions as their primary means of political fundraising—far more than corporations, which typically rely on other methods. Labor also helped pass a tax increase measure shepherded by Democratic Governor Jerry Brown that will be used to fund education.

In Michigan, a labor coalition successfully pushed for the repeal of the powerful emergency manager law the legislature passed in 2011, which gave state-appointed emergency managers broad powers to intervene in the affairs of financially distressed localities and school districts. The most powerful such law in the country, the measure was targeted by unions because of provisions that allow emergency managers to alter or suspend collective bargaining contracts and privatize services, as Stateline has reported. Four Michigan cities and three school districts, including the Detroit Public Schools, are currently under emergency state supervision. The city of Detroit is functioning under a separate “consent agreement” negotiated with the state. With the law's repeal, those managers will operate under a weaker law that has been in place since 1990.

Another Michigan ballot measure, which would have enshrined collective bargaining rights in the state constitution, represented a significant defeat for unions, failing by a margin of 60 percent to 40 percent. Proponents argued that the measure was necessary to combat a potential right-to-work measure and other infringements on collective bargaining, such as a law passed this year that blocked graduate researchers at the University of Michigan from unionizing. Opponents argued that the measure would cripple Michigan's economic recovery by invalidating cost-saving reforms to retirement benefits and calling into question the legal status of as many as 170 state laws.

After the vote, Michigan unions scrambled to demonstrate that lack of support for the proposed constitutional amendment should not be interpreted as a lack of support for collective bargaining rights. Progress Michigan released a poll showing that 70 percent of Michigan voters continue to support collective bargaining rights, with some expressing concern about meddling with the constitution as a rationale for voting against the amendment.

At his post–election debriefing with reporters, Republican Governor Rick Snyder acknowledged that the battle may provoke further discussion of a right-to-work measure in the state, which he has discouraged the legislature from pursuing. "I had actually asked the labor leaders not to actually go ahead with [the measure] when they had the petitions because that sort of provokes a more divisive discussion. I said ‘I don't plan to have [right-to-work] on my agenda but it could be on other people's agenda to a different degree if they went ahead with this."