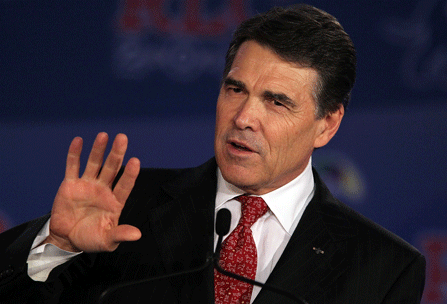 Texas Governor Rick Perry, a Republican, has said his state will not create a health insurance exchange or participate in an expansion of Medicaid. Texas has the highest uninsured rate in the country at 27 percent. (Getty)

Since the day it was enacted, many of the Affordable Care Act's opponents have preferred to treat it as provisional. First, they argued, the Supreme Court might overturn the whole law. When that didn't happen in June, opponents turned to the hope that maybe Mitt Romney would win the presidency and repeal it.

Now, there are no more maybes. “With an Obama victory one has to come to terms that the Affordable Care Act is the law of the land,” says Henry Aaron, a senior fellow at the Brookings Institution. “Maybe it's time to start living in reality rather than fantasy.”

Still, in the new reality, there remain some significant uncertainties in the immediate future of the ACA, particularly in how Republican governors, who have vociferously opposed the law until now, will react in the wake of President Obama's victory. The ACA is indeed the law of the land and will remain so for the foreseeable future, but that doesn't mean that Republican governors have to be full participants.

If they decline to be involved, however, they have to be willing to forego billions of federal dollars while at the same time inviting more federal involvement in their state health policies.

At issue is whether states will be willing and able to run their own health insurance exchanges — the ACA's envisioned online marketplaces where some 30 million Americans will be able to comparison shop for private insurance plans and apply for Medicaid and federal tax credits. If states choose not to run their own exchanges, the law requires the federal government to do it for them.

States must also decide whether they want to accept generous federal funding to expand their Medicaid programs to cover millions more people. In addition to the political liability that may represent for Republicans, the expansion also comes with a future price tag some states are taking very seriously.

The initial decision on establishing exchanges must be made by November 16, although the administration is expected to be lenient if some states need more time to complete their proposals. There is no deadline for states in considering whether to participate in the ACA's expanded Medicaid program, but it is a decision many of them will want to make sooner rather than later. Choices made on both health exchanges and Medicaid expansion will have major effects on consumers and the entire health care industry, as well as state budgets, for years to come.

From here on out, states will be the primary drivers of the health law's implementation. To achieve its intended goal of covering 30 million uninsured people with affordable health care, the Obama administration will have to engage in some give-and-take in order to ensure the cooperation of as many states as possible.

The federal health law originally required states to expand their Medicaid programs, starting in 2014, to people with incomes at or below 133 percent of the federal poverty level, about $31,000 for a family of four and $15,000 for an individual. That expansion by itself was expected to take in some 16 million uninsured people nationwide, about half of the total population the law aimed to cover.

But this year's Supreme Court decision, which largely upheld the law, made the Medicaid expansion optional for the states. That spawned a series of refusals to participate by GOP governors who opposed the law. Most Democratic governors are expected eventually to agree to implement the provision.

For states that take up the Medicaid option, the federal government will pay 100 percent of the costs for the first three years; after that states are responsible for up to 10 percent of the costs. Although the offer seems generous, some states genuinely worry that the increased expenses in the fourth year and beyond will strain their already costly Medicaid programs.

But the real decision will come early next year when state legislatures weigh in on the issue. In the meantime, many analysts expect the objections by GOP governors to fade away. Aaron, for example, maintains that the offer “is so hugely attractive to each state financially that refusal to expand coverage … [would be] an act of fiscal self-mutilation.”

Even so, all states are expected to weigh carefully the federal government's deficit reduction agreements this January as they make a decision on expanding Medicaid. In deficit talks last year, the Obama administration recommended substantial cuts to the overall Medicaid program under a proposal known as the “blended rate.” The extent of those cuts in a final budget agreement is expected to factor heavily into states' decisions on whether to expand Medicaid.

“State Medicaid programs are already unsustainable,” says Matt Salo, director of the National Association of Medicaid Directors. “That is not going to change.” No matter what states decide on the Medicaid expansion, simultaneous efforts will have to be made to cut overall costs by making fundamental changes to the program. For that to happen, the Obama administration will need to make the process of change much more flexible, Salo says.

Questions have also come up about whether states that accept the expansion will be permanently required to maintain the broader Medicaid coverage. So far, the administration has said that states may join the expansion now, then opt out later if the costs are too burdensome. But states have not been given an answer on whether they will be allowed to strike a middle ground by expanding coverage to a smaller number of people — those with incomes at or below the federal poverty line, rather than the broader population with incomes below 133 percent.

As for the absence of a deadline on the expansion, experts say states could conceivably hold out indefinitely because making a technical change to their enrollment systems to include the expanded population would not require a huge effort. Some may wait until after 2014 to expand Medicaid.

“The goal of expanding Medicaid in every state may take years,” says Chris Whatley, deputy director of the Council of State Governments. “Even if you have half the states not doing it in the beginning, they may eventually come along.” The 1965 Medicaid amendment to the Social Security Act made the program optional and many states took up the offer in the first couple of years. But there were stragglers. Arizona did not sign on until 1982.

“They are faced with a difficult choice politically because Obamacare is so bitterly unpopular among Republican voters,” says Mike Tuffin of APCO Worldwide, a health care consulting firm. “That said, if they don't pursue a state exchange they leave themselves open to having Washington come in and do it themselves, which is antithetical to Republican philosophy.”

A third option is for states to join in a partnership with the federal government to create and run an exchange. In future years, those states could opt to take over their exchanges entirely if they wanted to.

As of late October as many as 30 states had not yet committed to creating their own insurance exchanges, according to the Center on Budget and Policy Priorities. That does not mean that all of those states will refuse to do it. Some states, while resisting Obamacare publicly, have quietly taken steps to launch their own exchanges or join in partnership with the federal government, even while they hoped that a Romney victory would ultimately allow them to shelve those plans.

The exchanges are supposed to be up and running in less than a year (October 1, 2013) so that people can sign up for insurance that would take effect in January 2014. Given the complexity of the technical, design and insurance market issues that must be addressed to create an exchange, a number of states will be hard-pressed to create one on their own at this point. For those that have laid adequate groundwork, however, there is still time.

As for those states, such as Texas, that have done nothing thus far, it's probably too late. “They have not taken enough steps even if they change their minds,” says Alan Weil, executive director of the National Academy for State Health Policy.

In those states, the federal government will create and operate the exchange. “What they lose is being able to define the structure of the insurance choices in their own states and overseeing the health insurance plans that are offered,” says Weil. Many believe that every state knows its own insurance marketplace and consumers best and is therefore best-suited to design its own exchange.

An irony is that during the congressional debate over the Affordable Care Act, the initial favored position of Democrats was that there be only a federally administered exchange. Ultimately, those in favor of decentralized control won out, giving states the opportunity to create their own exchanges. Now it is a group of Republican-controlled states that will likely have to submit to a federal exchange.