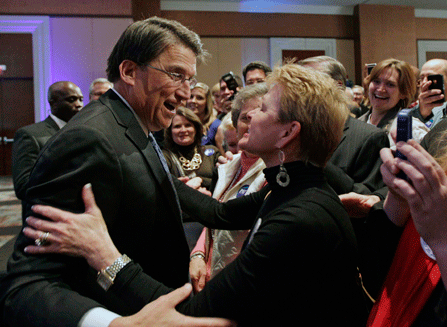 Despite heavy spending by outside groups in nearly a dozen races for governor, the partisan mix of Democrats and Republicans leading states appeared to change only slightly as a result of Tuesday's elections.

But as with the presidential race, North Carolina remained a rare bright spot for Republicans in gubernatorial contests. Democrats, who were defending eight of the 11 governorships in play, either held on to their offices or were leading in preliminary election results as of early Wednesday morning.

Democrats kept seats in Delaware, Missouri, New Hampshire, West Virginia and Vermont. Their candidates led by very slim margins in the two most competitive races of the night, in Montana and Washington state. Republicans, meanwhile, had no trouble holding on to governorships in Indiana, North Dakota and Utah.

Both parties channeled huge sums of money into the gubernatorial races, particularly through national groups of sitting governors. Together the Republican Governors Association and Democratic Governors Association spent some $50 million in the campaigns, and that was in addition to spending by allied outside groups. In some cases, the outside spending rivaled or even dwarfed the spending by the candidates themselves.

In New Hampshire, for example, Democrat Maggie Hassan and Republican Ovide Lamontagne emerged from their primary campaigns in early September with very little money in the bank. But the national groups stepped in, funding ambitious advertising campaigns in a state also targeted by presidential candidates. According to the DGA, the Democratic and Republican governors groups spent nearly $8 million apiece in New Hampshire.

Both groups pointed to successes in what amounted to a small change from the status quo. The Republican Governors Association touted the victory in North Carolina, which puts the number of Republican governors at 30, the most they have had in a dozen years. “There's no doubt that the Republican Party's strength comes from the states, and the RGA's ability to expand our majority provides optimism for the future,” said Virginia Governor Bob McDonnell, the chair of the RGA, in a statement.

But the Democratic Governors Association argued that it held on to office in states where circumstances put them at a disadvantage. “Like Republicans' failure to reclaim control of the (U.S.) Senate, 2012 presents a year of missed opportunities for the GOP in governors' races,” said DGA spokeswoman Kate Hansen, in a statement.

But the biggest races are still undecided.

With just under half the votes counted, Montana Attorney General Steve Bullock, a Democrat, had a slim lead of less than three percentage points in the governor's race against Republican Rick Hill, a former congressman.

And at the same time President Obama declared victory in Chicago, Washington's Democratic gubernatorial nominee Jay Inslee stopped just shy of doing the same in the Washington governor's race. “They are still counting the ballots in the governor's race,” he said, according to The Seattle Times, “but I believe this: I believe tonight our state has taken another step forward and we have elected a forward-looking governor.”

Inslee, a former congressman, held a lead of two percentage points Tuesday night over Republican rival Rob McKenna when officials released the first tallies of the state's mail-in ballots. But McKenna urged supporters to wait for the remaining votes to be counted. “This year, it will be worth it,” he said.

Republicans have not won the governorship in Washington state since Ronald Reagan won his first term in the White House, although Democrats barely held on to the office after an extended recount eight years ago.

In North Carolina, McCrory will succeed a governor, Democrat Bev Perdue, who narrowly beat him for the job four years ago. Perdue chose not to run for a second term, after a string of controversies dogged prominent Democrats in North Carolina since she took office.

McCrory benefitted from widespread name recognition from his last gubernatorial run, plus a conservative shift in the North Carolina electorate. That change gave Republicans control of the state legislature in 2010 and GOP presidential nominee Mitt Romney the state's electoral votes on Tuesday.

Dalton, McCrory's opponent, never gained much traction in the polls or in fundraising. Unlike McCrory, Dalton had to win a primary contest before the general election. The DGA says it spent $3.3 million to support Dalton, but both the DGA and the RGA stopped running ads in the race weeks before Election Day. Perdue, who has more than $1 million in her own campaign war chest, declined to spend it on Dalton's campaign.

Republicans had hoped to capitalize on the retirement of several Democratic incumbents, on top of Perdue's. Washington Governor Chris Gregoire and New Hampshire Governor John Lynch stepped aside after eight years in office. Montana Governor Brian Schweitzer had no choice; term limits prevented him from running again.

The victory by Hassan, a former state senator, in New Hampshire will make her the only female Democratic governor in the country. (Republicans have four: Nikki Haley of South Carolina, Susana Martinez of New Mexico, Jan Brewer of Arizona and Mary Fallin of Oklahoma.)

Republican Mike Pence, a member of Congress, will become the new governor of Indiana, succeeding Mitch Daniels. Pence is perhaps best known as the leader of a bloc of conservatives in the U.S. House. He will face little initial opposition from Democrats in the Indiana General Assembly, because Republican secured supermajorities in both the state House and Senate on Tuesday night.