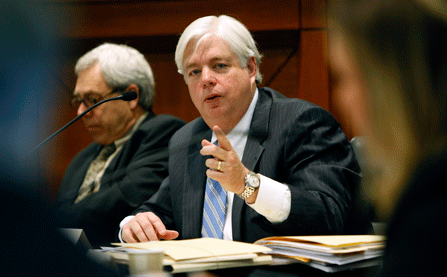 Call David Wiggins a survivor. The Iowa Supreme Court Justice accomplished what three of his colleagues couldn't two years ago: He held onto his job.

Wiggins on Tuesday (November 6) withstood a vigorous removal effort by social conservatives angered by his role in a landmark decision in 2009 that legalized same-sex marriage in Iowa. His retention is seen as a signal of Iowa's shifting views on same-sex marriage. “Iowans have made a strong statement for judicial independence and refused to let politics get in the way of judges doing their duty to uphold the law,” Chad Griffin, president of the Human Rights Campaign, a national group that advocates for gay and lesbian rights, said in a statement. “Marriage equality remains the law of the land in Iowa and judges will continue to do their jobs.”

That Wiggins kept his seat also exemplified the trend for the 33 states that held Supreme Court elections, either through retention votes or contested races: Little changed after the votes were tallied, even in high-stakes contests in Iowa, Florida, Michigan and North Carolina.

But that doesn't make the Supreme Court elections any less extraordinary. At least $19.5 million was spent on television advertisements alone, according to Justice at Stake, a national group that criticizes judicial elections. Those ads — most coming from political parties and outside groups — grew increasingly negative, sometimes distorting candidates' records.

The heavy spending and negativity even translated into judicial retention races, uncontested yes or no votes on justices, which rarely get much attention. This year, the Wiggins vote, as well as decisions on three judges in Florida, stood out.

On Tuesday, Wiggins drew 55 percent of the vote, the same margin that ousted Chief Justice Marsha Ternus and Justices David Baker and Michael Streit in 2010. Those judges had joined Wiggins in unanimously striking down a ban on same-sex marriage in 2009, saying it amounted to discrimination.

The ruling made Iowa the first Midwestern state to allow gay marriage but also placed a target on the backs of the justices. Outside groups such as the National Organization on Marriage have since joined with Iowa's social conservatives in pushing for their defeat when they came up for election, spending hundreds of thousands of dollars in campaigns accusing the judges of “judicial activism.”

This year it was Wiggins' turn to face their wrath. Like his ousted colleagues, he chose not to advocate on his own behalf, preferring to distance himself from the politics. He did, however, receive help from the Iowa State Bar Association, which spent tens of thousands of dollars to counteract the “No Wiggins” campaign.

“Iowans have affirmed their support for and confidence in Iowa's merit system of selecting judges,” Cynthia Moser, president of the Iowa State Bar Association, said at a news conference.

Bob Vander Plaats, who led the charge against Wiggins, argued the vote still reflected poorly on the justice. “Even though it looks like Justice Wiggins will be retained by a narrow margin, hundreds of thousands of voters have voted against his retention,” he told Radio Iowa. “That's not a good statement of validation for Justice Wiggins.”

In Florida, three judges survived an unprecedented — and high-priced — retention battle, each gaining another six-year term. Justices R. Fred Lewis, Barbara Pariente and Peggy Quince all netted more than two-thirds of the vote, defeating those hoping to oust them over several controversial rulings, including their decision in 2010 to remove a ballot measure challenging President Obama's health care law.

“The very foundation of Florida's independent judicial system was threatened in this election,” Lewis said in a statement. “I am grateful that Florida voters once again demonstrated their faith in our fair and impartial judicial system.”

The Florida Republican Party and the libertarian group Americans for Prosperity teamed up in the ouster attempt, accusing the judges of “legislating from the bench.” Most of the $4 million spent in the election, however, was in support of the judges. Though Florida law limited how much the justices could campaign, they had financial backing from the legal community.

No Florida judge has ever lost a retention election

In Michigan, where Democrats were hoping to gain control of the Supreme Court for the first time in 23 years, Republicans held onto their 4-3 majority.

The state's campaign was the most expensive of the judicial races in the country, generating some $10 million in spending, mostly split between the parties.

A conservative court would be a boon for Governor Rick Snyder, a Republican, whose cost-cutting measures have drawn the ire of state employees and teachers unions. Litigation over Michigan's controversial state emergency manager law could also take place. A ballot measure to repeal the law, which had given the state power to override local controls in negotiating contracts, passed narrowly on Tuesday.

Republicans also retained their 4-3 majority in North Carolina, where eight-year incumbent Justice Paul Newby edged out appellate Judge Sam Ervin IV, his Democratic challenger. About $3 million was spent on the race, most of it from outside super PACs in support of Newby.

Power could shift in Louisiana's Supreme Court, but it will take until December 8 to find out. That's when the state will hold a runoff to determine who will replace retiring Supreme Court Chief Justice Kitty Kimball, who makes up the difference in the court's 4-3 conservative majority.

A crowded field vied for the slot on Tuesday, but no candidate netted the required 50 percent of the vote, forcing a runoff between John Michael Guidry, a Democrat, and Jeff Hughes, a Republican.

There was no power shift at stake in Alabama's Supreme Court elections, but the court did get a prominent reminder of the past. Roy Moore, also known as “The Ten Commandments Judge,” reclaimed his former office nearly ten years after he was ousted for refusing to obey a federal judge's order to remove a granite sculpture of the Ten Commandments from the Alabama Judicial Building's lobby. Moore was first elected chief justice in 2000, but a state judicial panel removed him three years later. In this year's election, Moore, a Republican, defeated County Circuit Judge Bob Vance, a Democrat, with 52 percent of the vote.