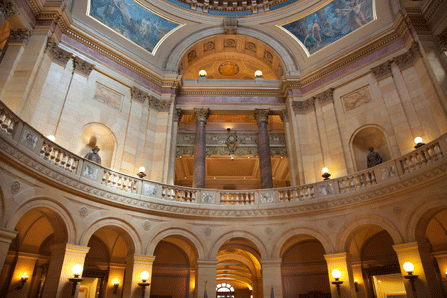 Last year, Minnesota's government—and its citizens—endured a weeks-long shutdown because Governor Mark Dayton, a Democrat, disagreed so sharply with the Republican-controlled legislature that the state failed to approve a budget. Next year, Dayton's budget will be decided on by fellow Democrats.

Democrats took both the Minnesota House and Senate away from Republicans yesterday, one of the party's high moments on a night when it made incremental gains across the country, reclaiming some of the power it lost in legislative chambers two years ago.

The Democrats' gains were concentrated in blue states and swing states. In addition to the Minnesota victory, the party won chambers in Colorado, New York and, it appeared, Maine, that it had lost two years earlier. The Oregon House, which had previously been tied, also moved into the Democratic column.

As of Wednesday morning, Democrats had made massive gains in the New Hampshire legislature, but control of the state was unclear. The party had expanded its edge in the California legislature, likely winning a two-thirds majority in both houses—a key threshold because it would allow Democrats to raise taxes without Republican votes. Plus, Democrats said they had retained majorities in some of the key chambers Republicans had targeted, including the Iowa Senate, Nevada Senate, Washington Senate, Kentucky House, Colorado Senate and New Mexico House.

The shift in power was substantial, but short of a landslide. The National Conference of State Legislatures reports that 13 chambers change hands between parties on average each even-numbered year, when most states hold their legislative elections. The chamber shift this year appeared to be falling within that range.

Maintaining the status quo in many places wasn't a bad result for Republicans, who picked up more than 20 legislative chambers from Democrats in 2010 and who entered election night with majorities in about 60 of the nation's 99 chambers. Republicans consolidated many of those gains yesterday. They held onto many chambers they won in 2010, including the North Carolina House and Senate, the Indiana House, the Michigan House and the Ohio House.

And, Republicans also gained chambers from Democrats, including the Arkansas Senate and Wisconsin Senate. They appeared to have won the Arkansas House as well. The result in Wisconsin ended the short-lived, one-seat Democratic majority that the party had won in a recall election earlier this year. Republicans also won a majority in the Alaska Senate, which has been tied.

The overall result is that Republicans—who also expanded their edge in governorships yesterday by prevailing in North Carolina—may still have the leading role in shaping policy in statehouses. Democrats, however, are likely to have more of a voice than they did the last two years.

The results were the first since legislative district lines were redrawn in the once-a-decade process that follows each census. And, which party drew the lines had a major impact on who won.

Democrats were taking chambers from Republicans in places where the lines were the product of courts (Minnesota), independent commissions (Colorado) and bipartisan compromises (Oregon). They mostly lost in places where Republican elected officials were in charge of redistricting.

That list includes chambers that might otherwise have been promising targets for Democrats, including ones in states such as Ohio, Michigan and Wisconsin, where President Obama was declared the winner last night. Democrats, of course, used redistricting to tilt the playing field in their favor in places where they had power, such as Illinois, where they expanded their legislative majorities yesterday.

In New York, both the power of redistricting and its limits were on display. One poll from Siena College in late October found that 55 percent of New Yorkers wanted the Democrats to control the state Senate, while only 36 percent favored Republicans. Yet the GOP was still able to put up a fight to maintain the Senate edge that it won in 2010 because of a bipartisan deal in the state: The G.O.P. received favorable Senate district lines in exchange for a favorable Assembly map for the Democrats. Ultimately, though, Democrats prevailed in both chambers.

Nor could a district map drawn by Democrats prevent Republicans from winning control in Arkansas for the first time since Reconstruction. Twenty years ago, Democrats dominated Southern legislative chambers. Now, there's a new solid South. Republicans gained new supermajorities in chambers in Tennessee, Georgia and North Carolina. If results hold up showing Republicans taking the Arkansas House, where they appeared to have a tiny edge this morning, every former Confederate state will have Republicans in charge of both houses of its legislature.

The results in Arkansas mean that Governor Mike Beebe, a popular Democrat, will spend the final two years of his term working with Republican legislators, who ran on cutting taxes and opposing the federal health care law. Republican Paul LePage, Maine's conservative governor, also looks as though he will face a legislature of the opposite party. The shift to divided government was an exception, however.

In several of the other places where returns showed party control changing hands, the outcome was complete control of state government—the governorship and both houses of the legislature—in the hands of one party. Democrats will be in control of Oregon, Colorado and New York, just as they were prior to the 2010 elections. They won complete control in Minnesota, too.

The trend toward one-party government is even starker when looking at legislative chambers alone. Come January, once new legislators have been sworn in, the only states that are likely to have Democrats in charge of one chamber of the legislature and Republicans in charge of the other are Kentucky, Iowa and perhaps New Hampshire—the lowest number in decades according to Tim Storey of the National Conference of State Legislatures.

New York Governor Andrew Cuomo, a Democrat, has enjoyed a productive relationship with the state's Republican Senate majority, winning passage of legislation ranging from same-sex marriage to a property tax cap. Now, he'll find out if he can work as well with Democrats. Meanwhile, Wisconsin Governor Scott Walker will once again have fellow Republicans in charge of the legislature, regaining support he previously used to pursue an ambitious agenda, including restrictions on collective bargaining for public employees.

As Wisconsin's experience shows, one-party control often isn't conducive to bipartisan compromise. Instead, it lets a party turn ideas into bold policy changes. With more states under one party control, it's possible more legislatures will pursue a sweeping agenda in the next two years.