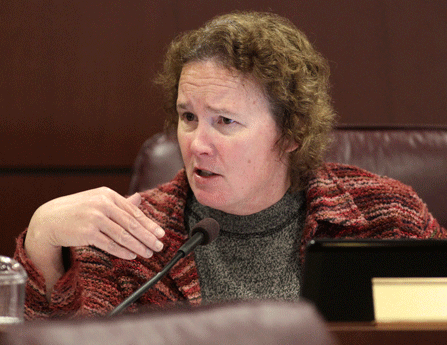 Voters all over America are ready for Campaign 2012 to be over. But those in Reno, Nevada, may be a little readier than most. Besides being inundated with ads for the presidential and U.S. Senate elections, they are the targets in a state legislative campaign that is spending lavish sums of money. Lavish, at least, for this part of the country.

It's not hard to figure out why. Democrats hold an 11-10 advantage in the Nevada Senate. Republicans hold the marginal 15th District, which both sides see as pivotal to controlling the chamber.

The two candidates running in the 15th, Republican incumbent Greg Brower and Democratic challenger Sheila Leslie, have raised more than $1 million combined so far, with Brower holding a $150,000 edge. It is the most expensive legislative contest in the state this year, and one of the most expensive in Nevada history. On top of the money the candidates have raised, independent expenditures, from groups such as the conservative Americans for Prosperity, linked to billionaires Charles and David Koch, have contributed to the glut of advertising and ratcheted up the negativity of the campaign.

A recent mailer from AFP superimposed Leslie's face on a fire dancer and criticized her for co-sponsoring a law to license fire performers when she served previously in the Senate. An ad by the liberal group Progressive Kick portrays Brower as a fox guarding the chicken coop for receiving contributions from the mining industry while serving on the state's Mining Oversight and Accountability Commission.

The Nevada 15th may be expensive, but it is not exactly an outlier. The Republican State Leadership Committee, a national group that plans to spend $38 million across the country on down-ballot state races, has spent more than $1.2 million in Nevada so far, focusing on the five state Senate elections it sees as crucial to control of the chamber.

“We are more active this year in Nevada than we have been in the past, in a large part because there's an opportunity there to make a significant change,” says Matt Walter, the group's political director. He sees the work in Nevada as a multi-year effort, with the ultimate goal of winning both the state Senate and the Assembly, which is also currently controlled by Democrats.

On the other side, Dan Roth, a spokesman for the Democratic Legislative Campaign Committee, says his group, which has spent about $250,000 in the state so far, has focused on the race because it sees Leslie as a particularly strong candidate and the district as essential. “For Republicans, there's virtually no way for them to get to the majority without winning this seat,” he says.

The candidates themselves are part of the reason why the race has been so expensive, says Eric Herzik, chair of the political science department at the University of Nevada, Reno. Leslie is seen as very liberal, but also very effective, he says. “Republicans would love to beat Sheila Leslie,” Herzik says. “They're willing to spend the extra dollar.”

On the other side, Brower is seen as a candidate who can be out-campaigned. He lost to the militantly conservative Sharron Angle in a 2002 primary that ended his career in the state Assembly. “He lost because Sharron Angle out-worked him,” Herzik says.

After he re-entered the legislature with a 2011 Senate appointment, Brower adopted harder-right positions in an unsuccessful bid for a congressional seat. ‘‘That run for Congress left a treasure trove of very conservative statements that in this swing district might hurt him,” Herzik says.

It's provided the fodder for some of the ads attacking Brower as an opponent of women's rights and Medicare, even though a state senator can do little or nothing to affect the federal program for seniors. The candidates themselves say they've been surprised by the viciousness of some of the attacks by outside groups.

It's all the more surprising because the candidates know each other well.

As freshman legislators in the State Assembly in 1999, they sat next to each other in the Assembly chamber. Just two years ago, when Brower was considering whether to accept appointment to his current Senate seat, he turned to his old Assembly neighbor for advice. Leslie advised him to take the job.

A lot has changed since then. For one, the 15th was redrawn by state courts in late 2011 as part of the state's redistricting process. A district that consistently voted Republican for decades is now more evenly split. Leslie was then serving in the Senate in a heavily Democratic district that became even more Democratic after redistricting. After her efforts to recruit a Democrat to run against Brower in the now more competitive 15th failed, Leslie took the unusual step of abandoning her safe seat in the Senate and moving there in order to run against Brower herself.

“Everybody in my party was appalled,” she says. “Nobody gives up a safe seat.”

That's not how Brower sees it. “It's just a partisan play, that's all it is,” he says. “The Democrats are desperate to maintain their stranglehold on the legislature in this race.”

The candidates have competing visions for Nevada's future. That's best illustrated by their divide on the perennial question of whether the state should impose a corporate income tax. Leslie supports creating one, Brower opposes it.

“We can't do any more improvements in Nevada until we fix our tax system,” Leslie says.

Brower counters that now would be the worst time to consider a new tax. “As we're trying to climb out of this recession,” he says, “the last thing we need to be doing is undermining job creation by talking about increasing business taxes.”

Education is a priority for both candidates, but they have different ideas for how to improve it. Leslie calls for more funding, more focus on early education and smaller class sizes, while Brower calls for spending money differently, giving districts more flexibility and reducing the impact of the state's teachers unions.

After a withering campaign, both agree that the campaign finance system itself needs to be re-evaluated, but their divergent views on how to fix it are telling. Leslie favors publicly financed campaigns, while Brower thinks shifting the burden of funding campaigns to taxpayers is exactly the wrong approach.

Some observers believe this contest, and other high-cost Senate races in Nevada, may turn out to have a lasting influence on campaign spending in the state. Herzik, the political science professor, thinks that Brower is more likely to win than Leslie, but that if the Democratic challenger were to defeat Brower and Democrats were to retain control of the Senate, it could force Republicans to question whether trying to outspend Democrats is the right approach.

“If anybody after this election comes out and says, ‘Well, it's because we didn't have enough money,” they should be banned from politics,” he says. “Money has not been a problem.”