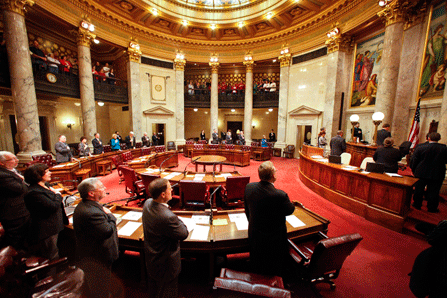 Democrats have been the majority party in the California Senate for more than 40 years, and even the most optimistic Republicans don't believe that will change on Election Day. Nonetheless, both parties will be in suspense as the election results roll in on Tuesday night because there is one political prize that still eludes the Democrats: a supermajority.

California Democrats are only two seats short of a two-thirds majority in the Senate. In California and many other states, a party with a supermajority—usually two-thirds of the seats—possesses greatly expanded powers. Depending on the state, supermajorities are needed to approve constitutional amendments, expedite legislative business and override a governor's vetoes. With one, the majority party can render the minority party virtually irrelevant in the policy-making process.

In some states, a party with a supermajority also controls appointments to prominent posts. For example, earlier this year after Governor Jerry Brown tried to reappoint Herbert Carter as the chairman of the California State University Board of Trustees, Senate Republicans united in opposition against him. Carter's position required a two-thirds confirmation vote, so the Democrats didn't even bother bringing it up. If the Democrats had possessed two more seats, Carter might well still have the job.

On Tuesday 44 states will hold state legislative elections and more than 6,000 of the roughly 7,400 seats across the country will be up for grabs. Nothing matters more in state capitols than which party is the majority. Even if its edge is only a seat or two, the majority party can often control the agenda and approve legislation on its own. For that reason, Democrats and Republicans are competing fiercely where majorities are at stake.

Yet, in most places they are not at stake. In only about a dozen states is it likely that party control of one or both chambers will change hands. In other states, including large ones such as California, Texas, Florida, Georgia and North Carolina, the election is really about whether one party will win a supermajority, and the outcome will also have tangible and far-reaching consequences.

Nationwide, Democrats are trying to bounce back from the stinging rebuke they suffered in 2010. The National Conference of State Legislatures reports that in 2010 Republicans took 720 seats and more than 20 chambers away from Democrats. Today, Republicans hold majorities in roughly 60 of the nation's 99 legislative chambers.

But with the presidential race a dead heat in most national polls, no one expects power to shift as dramatically toward one party or the other, as it did in 2010 or in 2006.

Michael Sargeant, executive director of the Democratic Legislative Campaign Committee, argues that Republicans are overextended from their 2010 wins, giving Democrats opportunities for gains, especially in blue states. He says Democrats are favorites to win back both houses in Maine and Minnesota, as well as the Colorado House and the Oregon House, which is currently deadlocked. Democrats also have hopes of wresting the New York Senate away from Republicans.  “Our goal is to add chambers,” Sargeant says. “I think we'll do that. I think we'll gain seats nationally as well.”

Chris Jankowski, president of the Republican State Leadership Committee, points out that through the once-a-decade redistricting process that follows each census, Republicans won key victories before any 2012 ballots were cast. Republicans, for example, won control of the Ohio House in 2010. Now, thanks in part to the favorable district map the party devised, that majority isn't seen as being in serious doubt, even though Ohio is the nation's hottest presidential battleground.

Jankowski is confident the party will take control of both houses of the legislature in Arkansas, a state that is trending Republican. He also believes the new Democratic majority in the Wisconsin Senate—won in a recall election in June—will prove short-lived. The Iowa Senate, Colorado Senate, New Mexico House, Washington Senate and Alaska Senate (which is currently tied) are other opportunities for Republican pickups. “We had a great 2010,” Jankowski says. “We consolidated those gains in redistricting. Now we're on offense again.”

Surprises outside of this narrow playing field certainly are possible on Tuesday, but in many places the talk this election year is about whether one of the parties will be able to win—or eliminate—a supermajority.

The most obvious tangible benefit of a lopsided legislative edge is the ability to override a governor's veto, which most often takes a two-thirds vote. That power is only relevant in a few places at the moment. Only eight states currently have a governor of one party and a legislature where both houses are controlled by the other.

But supermajorities also matter for other reasons. In Indiana, two-thirds of legislators must be present for legislative business to take place. House Democrats took advantage of that quorum rule in January by fleeing the legislature—and the state—to temporarily block right-to-work legislation. Republicans are seeking a two-thirds edge to make a repeat of that tactic impossible. “The obvious thing,” says Brian Howey, an Indiana political analyst, “is the Democrats wouldn't have to show up.”

In California, it takes a two-thirds vote to raise taxes, which allowed Republican legislators to block Governor Brown's tax increases last year. (This year, he's going to voters directly with a ballot initiative instead.) Democrats would need supermajorities in both the Assembly and Senate to be able to raise taxes on their own and Republicans are expected to hold enough seats in the Assembly to prevent that. The Senate, though, can approve many appointments on its own with a two-thirds vote.

In New Hampshire, as in many states, it takes a legislative supermajority to advance a constitutional amendment. In January, Republicans lawmakers surpassed the 60 percent threshold and voted for an amendment to place an income tax ban in the constitution. As a result, voters will decide on the amendment next week.

Perhaps nowhere is the shift more dramatic than in Tennessee. Republicans  won majorities in the Tennessee House and Senate just four years ago. Even after that 2008 election, the G.O.P. only had a 50-49 edge in the House and Democrats were able to help select a turncoat Republican as speaker.

Republicans greatly expanded their advantage in 2010. Now, they are aiming for supermajorities in both chambers and Ed Cromer, the editor of the Tennessee Journal, says they're expected to get them. In fact, Republicans are aiming even higher. The Knoxville News Sentinel recently reported Republicans are hoping for a “super-duper majority”—though there's no formal definition of that.

In a legislature where they were the majority party just a few years ago, Democrats' formal powers could be virtually non-existent come January. With a two-thirds edge, Tennessee Republicans would constitute a quorum on their own, preventing any Indiana-style walkout. They could also change legislative rules or cut off debate at will. “We used to have a speaker of the house,” Cromer says, “who would say that if you can get a two-thirds vote you can sell the dome off the capitol.”