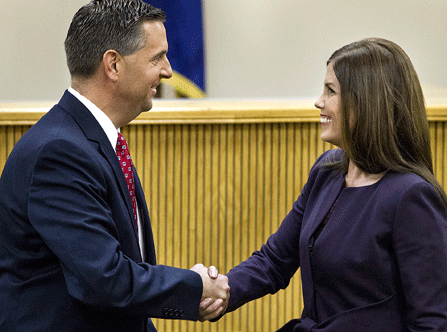 HARRISBURG, Pa.—There's a phantom hanging over the campaign for attorney general in Pennsylvania. It's one that seems at first glance many miles removed from the contest between Democrat Kathleen Kane and Republican David Freed. The phantom's name is Jerry Sandusky. The connection between the Sandusky case and the attorney general's race is Republican Governor Tom Corbett.

Corbett, who was attorney general himself until he became governor in 2011, is believed by many Pennsylvanians to have procrastinated in handling the case against Sandusky, the football coach who has been convicted on multiple counts of sexual abuse of young boys. Only 17 percent of voters approve of Corbett's investigation of Sandusky. And many Pennsylvanians consider Freed to be Corbett's hand-picked choice for attorney general. So Freed finds himself in an awkward position he never would have wanted to be in.

For his part, Freed denies he was ever anointed by anyone. “I must have missed the phone call when Governor Corbett called and handpicked me to run for attorney general,” he said at a debate last week, responding to Kane's allegation that Freed, the elected district attorney of Cumberland County in western Pennsylvania, was chosen by Corbett to run unopposed for the Republican nomination. “This was a decision I made on my own,” Freed said, “based on my record and the breadth of experience I gained as DA.”

“The fact that Corbett has endorsed Freed binds the two together and Corbett's popularity is low right now,” says Tom Baldino, professor of political science at Wilkes-Barre University. “If voters are looking for a way to register their discontent with Corbett, one way to do that is to vote for Kane.” A recent poll had Kane leading Freed 39-26, with 34 percent of voters still undecided.

Kane, who served for 12 years as an assistant district attorney in Scranton and frequently commented on the Sandusky case on national news broadcasts, said during the debate that she will probe how the Sandusky investigation was conducted. She wants to know why a 33-month long grand jury investigation was used to gather facts to make a case against Sandusky and why the attorney general's office under Corbett initially put so few resources into investigating the case.

“It has never taken me 33 months to get a predator off of the street,” said Kane, referring to Corbett's use of a grand jury to investigate claims against Sandusky before filing charges. “I've never used a grand jury (for child sexual abuse cases), it takes too long. I was not handpicked by Tom Corbett and I will conduct an independent investigation (of how the case was handled).”

Freed has said he will review the case but will need to see all the records when he gets into office before making any determinations on its handling. Corbett has defended the Sandusky investigation against Kane's charges, telling a group of reporters Thursday, "There was no politics involved in that investigation, none, zero. I challenge anybody out there to bring forward one piece of evidence… This is all politics being played by the other party."

Electing Pennsylvania's attorney general is relatively new. Voters approved a constitutional amendment in 1978 that made the position elective and took it out of the governor's cabinet, following a series of high profile public corruption cases within the cabinet.

But the elected position means that there can be political disputes between the state's top officials if, for instance, the governor is a Democrat and the attorney general is a Republican, as happened with then- Attorney General Corbett and former Democratic Governor Ed Rendell. Political differences could put a strain on any relationship between Governor Corbett and an Attorney General Kane.

“I think that should she get into office, you can be assured” that there will be tension, says G. Terry Madonna, a political science professor and pollster at Franklin and Marshall University.

Aside from the political wrangling, the next attorney general will also have to contend with the rise in gun violence in Philadelphia, the city with the highest murder rate among the top 10 most populated cities in the country. As of last Friday, 279 people had been murdered in Philadelphia this year, according to the city's Police Department.

Both candidates have said they would tackle the problem, but they have different approaches.

“We tackle violent crime by enforcing the laws that we have,” says Freed. “We need to lock up criminals and keep them locked up.”

Kane focuses on the number of guns flowing from other states with less strict permitting laws, specifically Florida, a large source of guns recovered in Pennsylvania crimes. The next attorney general can renegotiate reciprocity between the states, Kane reminded voters during the debate, and she would take a tough stance on states with more lenient permitting systems.

The race also bears the hallmark of many state campaigns this election season—the influence of outside money from national political action committees. Earlier in the campaign, the Republican State Leadership Committee, a conservative group based in Washington, D.C., ran attack ads against Kane in the Philadelphia media market claiming she had “gone soft” on the convicted rapist of a 16-year-old girl who was later released and went on to attack two more women. But Kane was not the prosecutor assigned to the case. The victim's father came forward and asked the RSLC to stop running the ad, which was labeled by FactCheck.org as “one of the most blatantly false ads of the political season.” The RSLC removed that ad, but ran a similar ad attacking Kane's actual courtroom experience. Factcheck still called the new ad “misleading.”

Freed distanced himself from both of the ads, but stopped short of calling them false, as Kane repeatedly asked him to do. More recently, a Washington, D.C-based group, the Committee for Justice and Fairness, which is heavily funded by the Association of Democratic Attorneys General, ran an ad attacking Freed, which both campaigns called misleading and asked to have removed from the airwaves. The Committee has said it will not remove the ad.

In the shadow of national races

Despite the emphasis on the Sandusky case and other state prosecutions, the winner of this contest could well be determined by the presidential result in Pennsylvania. “With Obama at the top of the ticket and Pennsylvania leaning Democratic, Kane will benefit from an assumed robust Democratic turnout,” says Wilkes-Barre's Baldino. Also, after a long primary fight, Kane has statewide name recognition that Freed lacks. However, Freed has picked up key newspaper endorsements in the western and central part of the state, including the Pittsburgh Post-Gazette and The Patriot News in Harrisburg, and been endorsed by at least 40 current and former district attorneys and several law enforcement organizations.

Both candidates began to air their own television advertisements last week, which will run statewide through Election Day.