Voters in nine states will consider borrowing more than $3 billion for schools and roads in statewide bond measures on the ballot November 6, including a few that could test some governors' influence.

New Jersey Governor Chris Christie's mantra has been cutting taxes and reining in spending, but he wants voters to let the state borrow $750 million to upgrade and build new facilities at the state's public and private colleges and universities. If approved, it would be the first bond measure for higher education in the state in 24 years.

“You know me, I'm not somebody who likes to spend a whole lot of money or borrow money,” the Republican governor said at a town hall meeting earlier this month, where he urged a “yes” vote on Question 2. “I wouldn't be doing this if I didn't think it was important to the economic future of the state.”

The money would be used to build or improve academic buildings, laboratories and libraries, but not athletic facilities. It excludes institutions with endowments over $1 billion, namely Princeton.

The proposal is part of Christie's dramatic efforts to overhaul higher education that includes legislation he signed in August that merged parts of Rutgers University and the University of Medicine and Dentistry of New Jersey.

Another governor that is stumping for a bond measure as a job creator is Alabama Governor Robert Bentley who is urging voters there to allow the state to sell additional bonds, which he says are needed to lure business to the state.

Bentley is appearing in TV ads urging voters to approve Amendment 2, which would keep the state's bond limit at its current level of $750 million, but also would allow the state to re-issue new bonds as the existing bonds are paid off. "If we don't have incentive money, we are not going to be able to compete,” The Associated Press reported. “If we can't compete, we are not going to get companies to come to Alabama like Airbus and Wrangler," he said earlier this month. 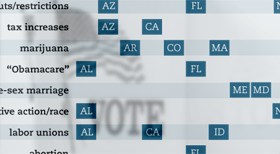 But in Maine, Governor Paul LePage is urging voters to reject three bond measures totaling $70 million that lawmakers put on the ballot for transportation and schools. “While these bond proposals were authorized by legislators, it does not mean that we need to spend the money. I cannot personally support any of these bonds and will not vote for them at the polls in November,” LePage said earlier this year. “Even with the voters' authorization to borrow this money, my administration will not spend it until we've lowered our debt significantly. That could be several years,” he said.

This year's largest statewide bond measure is in Arkansas, which proposes levying 0.5 percent sales tax to fund a $1.3 billion bond issue for roads. A measure in Alaska would borrow $453 million for transportation. Governors in both states — Democrat Mike Beebe and Republican Sean Parnell, respectively —- support the bonds, but aren't actively campaigning for them.

States have been cautious about proposing new bond issues since the onset of the financial crisis, according to John Matsusaka, president of the Initiative and Referendum Institute at the University of Southern California. In 2010, voters approved only $2 billion in new bonds compared to $13 billion in 2008, according to the institute's election guide.

Overall, voters in 38 states will consider 174 statewide ballot measures, according to the National Conference of State Legislatures' ballot database. For an overview of some of the contentious measures in multiple states, including gay marriage and marijuana, see Stateline's Infographic.

Hundreds more ballot measures will be considered at the local level. Throughout Ohio's 88 counties, for example, the National Taxpayers Union's election guide lists hundreds of ballot proposals seeking to renew or impose additional property and income taxes as well as borrowing measures. Local governments in California likewise put forth hundreds of revenue-raising proposals and bond measures, according to the NTU, which seeks to limit taxes.