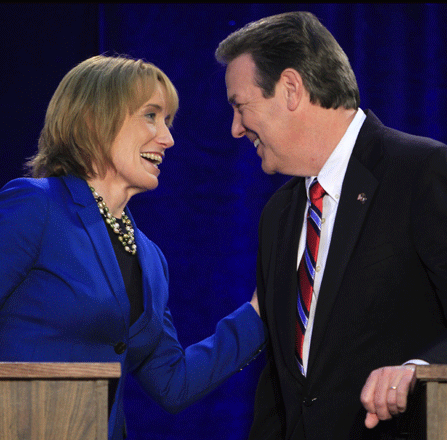 MANCHESTER, NH – Here in New Hampshire's largest city last Thursday, President Obama repeated what is now a familiar refrain: As president, Mitt Romney would reduce income taxes for the rich, while leaving the middle class behind. The crowd cheered the assault on Romney's tax-cutting agenda.

Yet just across the street at a gubernatorial debate earlier that same day, Democratic nominee Maggie Hassan was repeating what is, for New Hampshire residents, an even more familiar refrain. “We have one of the lowest tax burdens,” she said, “and I'm proud to have been a part of the team that kept it that way. I oppose an income or a sales tax and I would veto it if it came to my desk.”

Republican states under conservative leadership, such as Kansas, Oklahoma and Louisiana, have talked about eliminating their income taxes in recent years, only to reject the concept as too much, too fast. Yet in New Hampshire — a state that has had a Democratic governor for 14 of the last 16 years and has voted Democratic in four of the last five presidential elections — opposing an income tax is not an extreme position.

Long before Grover Norquist arrived on the national political scene with his pledge against tax increases, New Hampshire had its own “pledge” against the creation of any statewide income or sales taxes. It has been the accepted gospel of Democratic and Republican nominees for governor alike, with only a few notable exceptions.

To those on the right, New Hampshire is proof that a state can thrive with low taxes and low spending. To the left, the state is a case study in the power of poisonous anti-tax rhetoric to prevent a government from providing basic services.

Almost every two years, New Hampshire Republicans comb the record to seek out any softness in Democrats' opposition to income taxes. And almost every two years, the state's Democrats face a choice. They can continue with the anti-tax political formula that has been so successful for them. Or they can embrace an income tax as a way to fund services and shift the tax burden toward the wealthy, a position that is an integral element of their party's national political identity.

Even though the candidates for governor agree on broad-based taxes — like Hassan, Ovide Lamontagne, the Republican nominee for governor, is emphatically against them — this year's elections could help change the conversation. Question 1, a constitutional amendment on the ballot, would ban the state from adopting an income tax. If it passes, the issue may be settled for the foreseeable future. If it fails, the result could be a step toward adopting the tax. Even supporters of an income tax acknowledge, though, that this step would only be the beginning of a very long journey.

Facing off in one of the closest races for governor in the country, Hassan and Lamontagne have found plenty to disagree about, including policies toward labor, health, education and most social issues. Lamontagne, a lawyer and longtime activist in New Hampshire Republican politics, opposes gay marriage and the Medicaid expansion in the Obama health care law, for example. Hassan supports both.

And they disagree on some aspects of tax policy. Hassan has criticized the Republican-controlled legislature for reducing the state's cigarette tax, while approving an austere budget that cut state funding for higher education by almost 50 percent. “They might as well have said to our young people, ‘Smoke more, study less,' ” she said at the debate last week. Later in the debate, Lamontagne retorted that Hassan raised business taxes as a leader in an earlier legislature. He wants to cut them.

Given all those disagreements, it's remarkable how often the candidates have talked about one of the few things they agree on, their opposition to broad-based taxes —remarkable, that is, if it weren't typical for New Hampshire.

The debate over broad-based taxes has played a central role in New Hampshire gubernatorial politics at least since 1972, when Meldrim Thomson ousted the incumbent governor in a Republican primary by pledging to oppose an income or sales tax. Thanks to the fierce advocacy of Thomson and William Loeb, the influential publisher of the Manchester Union-Leader, the pledge became a central part of New Hampshire's political lexicon. So did the “New Hampshire Advantage” — the idea that the state benefits economically from its low-tax climate.

Today, it's expected that top Republicans will take the pledge and that they will use it as a cudgel against Democrats whenever they can. “Frankly, Republicans are used to it being their go-to issue,” says Charlie Arlinghaus of the Josiah Bartlett Center, a think tank named for an 18th-century New Hampshire conservative. “Whatever charge you might make or difference you might have with your opponent, you can always accuse them of being in favor of an income tax.”

Hassan said consistently in the Democratic primary that she would veto an income or sales tax. She said it in her victory speech within minutes of claiming the Democratic nomination. It was the first thing she said in the first debate of the fall campaign—and she's said it countless times since.

Nonetheless, Republicans are quick to point out that as a state Senate candidate in 2002, Hassan was open to an income tax, if it could be used to eliminate the statewide property tax. “I've never had to change my position on this,” Lamontagne said at the debate in Manchester last week. “Maggie has.”

When Democrats nominate candidates for governor who favor an income tax, this cudgel has worked especially well. The last two pro-income tax candidates to win a Democratic nomination for governor were Arnie Arnesen in 1992 and Mark Fernald in 2002. Neither surpassed 40 percent of the vote in the general election. In the last decade, by contrast, Democrat John Lynch took the pledge each of the four times he ran for governor. He won each time. Lynch is retiring this year.

The end result is that, if anything, New Hampshire's commitment to the pledge has become stronger in recent years, even as the state's traditional Republican character has eroded. In 1999, an income tax passed both houses of the Legislature, only to be squelched by Jeanne Shaheen, the Democratic governor, who had taken the pledge. The next year Shaheen refused to take the pledge and won reelection — the first governor in modern New Hampshire history to do so — then pushed a sales tax that went nowhere. Yet when Democrats controlled the governorship and legislature for four years up until the Republican landslide in 2010, they never seriously considered new income or sales taxes, even as the state's budget deteriorated during the recession.

In this way, New Hampshire is unlike any other state in the country. Nine states lack a general personal income tax, while five lack a sales tax. But the only other state that lacks both is Alaska, which gets 90 percent of its revenue from oil taxes.

New Hampshire is able to get by without either of the two primary state revenue sources in part because it is one of the wealthiest states in the country and in part because its property taxes and corporate taxes are unusually high. The state also has an interest and dividends tax, similar in some ways to an individual income tax, but it doesn't cover earned income.

Still, the most important way that New Hampshire survives without an income or sales tax is by spending less and doing less. Combined state and local spending in New Hampshire is far below the national average and even further below the average for New England. The state is one of the few that doesn't fund preschool. It ranks 50th in higher education funding per capita. Its Medicaid eligibility income ceiling for parents is 49 percent of the federal poverty line, far below the national average.

To many conservatives, these are signs of successful spending restraint. All of this, however, is a source of tremendous frustration to the liberal wing of the Democratic Party, which argues that the state could cut property taxes, make the tax code more progressive and fund more generous services, if only it adopted an income tax. “We've been brainwashed and effectively brainwashed for decades,” says Arnesen, the one-time Democratic gubernatorial nominee.

The latest chapter is this intra-party debate occurred in the Democratic primary for governor this year. Hassan's leading opponent, former state senator Jackie Cilley, didn't advocate an income tax, but she also pointedly refused to take the pledge. Instead, one of her TV ads declared, accompanied by horror-movie visuals, “This no-tax pledge is turning our politicians into pledge zombies.” She made a website to drive the point home: http://pledgezombies.com. Hassan defeated her easily.

To income tax supporters, the leadership of the Democratic Party in recent years has been too timid. After all, it's been a decade since the last pro-income tax candidate for governor appeared on the general election ballot. Is the tax still a political impossibility? This year, when voters weigh in on Question 1, they will help provide an answer.

Republicans used their lopsided legislative majorities to put the constitutional amendment to ban an income tax before voters. Their hope is to enshrine what they see as a core New Hampshire value in state law for all time. “The argument against banning an income tax is that you're hamstringing future legislatures,” says Corey Lewandowski, state director of the conservative group Americans for Prosperity. “Well, I'm ok with that, to be honest with you.”

The amendment needs two-thirds of the vote to pass. Even Lewandowski and other supporters acknowledge that will be a difficult threshold to reach. The issue has received scant attention, as the races for president, governor and Congress crowd the airwaves.

Some opponents of Question 1, including Hassan, don't support an income tax but nonetheless don't think a ban should be written into the constitution. Still, the vote is something close to a test of what the people of New Hampshire think of an income tax. If it receives 45 percent of the vote or 55 percent or 65 percent, the implications will be very different.

One person who wasn't willing to wait for the verdict on Question 1 is State Representative Peter Sullivan. In late September, he submitted plans to draft a bill creating a one-percent income tax. Republicans pounced, accusing Hassan of secretly collaborating with him. She responded by saying, yet again, that she was against the idea.

Some Democrats were happy that Sullivan had brought up the subject. Others weren't. “There's a path of least resistance segment of the Democratic Party,” he says, “that was like, ‘Oh Jesus, couldn't you wait a few weeks for this?' ”

To Sullivan, this was all a big overreaction. He hadn't written a word of the bill and isn't actually sure what will be in it. Nor is he optimistic that it will pass — at least not any time soon. “My proposal has no hope of seeing the light of day as law and I have no illusions about that,” Sullivan says. “I do think we still need to have the discussion.”