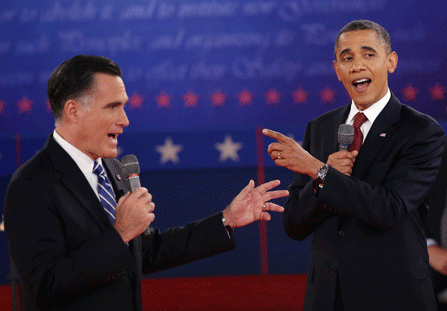 Governor Mitt Romney, left, and President Obama spar over taxes at the Hofstra University debate. But the impact of the federal tax code on states is not well understood. (Getty)

The presidential candidates' tax proposals may lack detail, but one thing is clear: State taxes, which are closely tied to the federal tax code, could change dramatically depending on the outcome of the election.

President Barack Obama and his Republican challenger Mitt Romney differ sharply on taxes, especially personal income taxes. President Obama says he wants to raise taxes on people earning more than $250,000 a year. He also backs “the Buffett Rule,” which would require individuals with an adjusted gross income of more than $1 million to pay at least 30 percent in taxes. Obama promises to close corporate tax loopholes, including one that benefits companies that move overseas.

Romney wants to cut the tax rate for every income bracket by 20 percent. He promises to pay for his plan by eliminating certain deductions and loopholes—though he hasn't said which ones. Instead, he has suggested that he might cap deductions at a certain figure, perhaps $25,000. During last week's presidential debate, Romney also pledged that for “middle-income” taxpayers, he will eliminate taxes on interest, dividends and capital gains.

In addition, Romney wants to end the federal estate tax, the tax collected on property that is inherited after someone dies. Two-thirds of the states levy a state estate tax based on the federal system, so they would have to decide whether to create an estate tax of their own if Romney gets his way. Both Obama and Romney say that their plans will help jumpstart the economy while cutting — or at least not adding to — the deficit. But states are wary.

“The fact of the matter is the federal government usually acts without regard to the impact on the states,” says Walter Hellerstein, a professor at the University of Georgia Law School who specializes in state taxation. “You need to find some revenue and someone is going to be hurt. Is it going to be the states?”

States are especially concerned about the possibility that the winner of the election will target the preferential tax treatment the federal government gives to state and local government bonds. Currently the federal government doesn't tax the interest on these bonds, making them attractive to investors. That makes it easier for states and cities to borrow money for roads, schools and other public works. At the end of 2011, state and local governments owed roughly $3 trillion in the form of tax-preferred bonds, the Congressional Budget Office said in a report earlier this year.

“State and local governments are really nervous about the discussion that is going on about muni bonds coming out of the Romney campaign,” says Kim Rueben, senior fellow at the Urban-Brookings Tax Policy Center. States fear if the tax exempt status for interest ends, their borrowing costs would increase.

Another popular tax break that could be on the chopping block is the deductibility of state and local taxes. Nearly one-third of tax filers who itemized deductions in 2009 subtracted certain state and local taxes when calculating their federal taxable income, according to the Congressional Budget Office (CBO). This deduction thus indirectly subsidizes state and local governments because it decreases the net cost to taxpayers of paying such deductible taxes, the CBO report explained, at a cost of $67 billion in 2011.

“Some states might not have as much cover for irresponsibly high tax rates of their own if the write-off at the federal level were limited,” says Pete Sepp, executive vice president of the National Taxpayers Union, a group that seeks to rein in taxes. “If you knew, for example, that you could no longer `get back' on your federal return a percentage of the state income tax rate hike your legislature just imposed on you, maybe moving somewhere else or, likelier, moving your income somewhere else, would become more attractive,” he says.

The elimination of certain federal tax deductions also could affect states indirectly. Getting rid of the home mortgage interest deduction, for example, could dampen the housing market, which could hurt state economies. Eliminating the charitable donation deduction might dissuade people from contributing as much money to charities. If charities are strapped for cash, more people might turn to the states for certain services. “Everything has some kind of an impact,” says Hellerstein, the University of Georgia Law School professor.