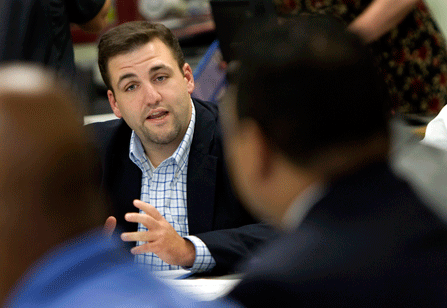 If it were up to Walter Dalton and Pat McCrory, they'd have a little less company on the ballot in North Carolina this year. In particular, they wouldn't be sharing space with candidates for State Superintendent of Public Instruction. Dalton and McCrory are opposing gubernatorial nominees, but they agree on one thing: The governor ought to be able to appoint the state's top education official.

It doesn't appear that wish will be granted anytime soon — making the office appointive would require a constitutional amendment. But the proper role of the schools chief is central to the campaign of Democrat June Atkinson, who currently holds the position in North Carolina, and to some of her counterparts across the country.

Some 13 states currently make their top education official subject to a popular vote. And in virtually every one of those states, there are critics who ask why such an office should be so deeply involved in politics.

Atkinson is one of three incumbent state education chiefs up for re-election this year. A fourth, Washington's Randy Dorn, was effectively re-elected in the state's August primary, when he received more than 50 percent of the vote, putting him on the November ballot uncontested.

While education contests are down-ballot elections, and don't draw the same attention as other statewide campaigns, the ones this year are coming at a time of major change in education policy across the country, change that's been driven by federal Race to the Top grants and No Child Left Behind waivers. In addition to drawing arguments about the scope of the position, the races serve as a broader referendum on those education changes.

Questions about her role are nothing new to North Carolina's Atkinson. Her authority over the state's Department of Public Instruction was challenged by the appointments made by Democratic administrations during her first two terms. Governor Mike Easley's former education adviser, J.B. Buxton, was appointed deputy superintendent in 2007, sapping most of her responsibilities. Atkinson fought back in 2009, after Governor Bev Perdue took office, successfully suing to block Perdue's appointment of Bill Harrison as CEO of the state's public schools.

“It's a regular debate here in North Carolina,” says Ferrel Guillory, director of the Program on Public Life at the University of North Carolina at Chapel Hill. The education position is just one of nine statewide elected offices, from Lieutenant Governor to Commissioner of Agriculture. But it has been the biggest target of governors and legislators seeking to reduce the number of elected positions. Still, Guillory says it would be nearly impossible to do. “It's hard to go to the legislature and say ‘don't let the people vote,'” he says.

Chris Minnich, senior membership director at the Council of Chief State School Officers, says that efforts to curtail the authority of elected education officials are a national occurrence. “There's not a governor out there that doesn't think they should be in control of the education system,” he says.

In North Carolina, Atkinson says her relations with Governor Perdue have improved since their contentious start. She points to the state's successful $400 million federal Race to the Top grant in 2010, which required cooperation from Perdue and school districts across the state, as evidence of her ability to bring people together.

But her Republican opponent, Republican John Tedesco, says that Atkinson's power struggles are evidence that she is divisive. “We've had more challenges with her than we ever had with that role,” he says.

Tedesco is best known for his role spearheading an effort to do away with the desegregation program in Wake County, where he serves on the school board. While that move drew national attention and protests from the NAACP, Tedesco says his other work on the board is evidence of his ability to form a consensus, particularly a drive to reduce the number of student suspensions in the district.  With the Republican McCrory holding a lead over his Democratic opponent Dalton in the race for governor, Tedesco says that he would be able to work better with the state's presumed future leadership.

Indiana's education chief, Republican Tony Bennett, has presided over massive education policy shifts during his tenure in office, and he credits them to the harmonious relationship he's had with outgoing GOP Governor Mitch Daniels. Those changes, including the introduction of a broad private school voucher system, teacher evaluations based on student performance and A-through-F grading for schools, has made Bennett a national figure in education circles. The current campaign is in many ways a referendum on the Bennett-Daniels pro-competition policies.

Bennett's national profile has helped him amass a campaign treasury of $1.2 million, nearly half of which has come from out-of-state donors, including a $200,000 contribution from Alice Walton, an heir to the Wal-Mart fortune. That $200,000 alone nearly equals the total that his Democrat opponent Glenda Ritz has raised so far. She's backed primarily by the state teachers union and paints Bennett's out-of-state fundraising as evidence of his kowtowing to the business community.

Ritz describes Bennett's policies, many of which rely on results from high-stakes standardized testing, as part of a “pass-fail” approach that seeks to reward high-performing schools and strip funding from weaker ones, in a scheme to ultimately turn them private. Ritz, a media specialist in an Indianapolis elementary school, is particularly troubled by a new law that requires all third-graders in the state to pass a reading test in order to advance to fourth grade, one of several such laws across the country.

“Currently the governor and the superintendent have a political agenda,” she says, “and the students in Indiana are caught in the middle.”

Montana's contest for State Superintendent of Public Instruction also pits a challenger against an incumbent with a growing national profile, though in this case the parties are reversed.

Incumbent Democrat Denise Juneau was given a speaking slot this summer at the Democratic National Convention, where she talked about the role education played in helping her become the first Native American woman in the country elected to statewide office. That attention has brought her added name recognition among voters, which can be difficult to obtain in a lower-tier statewide race.

Her Republican opponent, Sandy Welch, says the publicity is evidence that Juneau has larger political ambitions. “While I'm running for a political office,” says Welch, an education consultant and former school administrator, “I'm not trying to politicize it.”

Juneau doesn't dispute that her political career could go beyond running for education chief. If she were to win this election, term limits would prevent her from running again. She says she would consider running for another position down the road, but bristles at the suggestion that she's already looking ahead to future races.

“I ran for this position because I wanted this job,” she says. “I think it's the best job anyone can have.”

Despite the national attention, Juneau is committed to bucking at least one national trend. Montana is one of nine states with no charter schools. Republican Welch thinks that should change. Juneau doesn't. “We don't have charter schools, we don't have vouchers and we don't have tax-credit scholarships,” she says. “I'm against all of those coming into our system. Our public education system is doing a great job.”