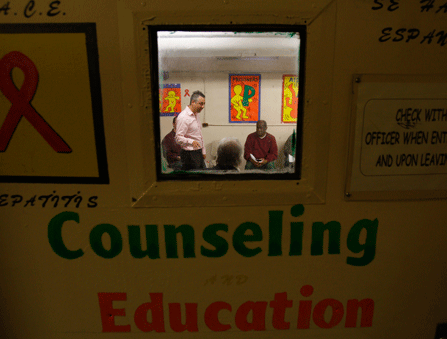 McCLOUD, Oklahoma — Shawna Gordon isn't alone in worrying what will happen on that day in the future when she ventures beyond the familiar barbed wire that circumscribes her existence now.

“To think, one day they're going to come in and say, ‘Pack your stuff,' I don't know how I'm going to react,” says Gordon. A heavily tattooed 42-year-old woman with bristly red hair and self-inflicted cuts up and down her arms, she is one of the participants in a unique release program in Oklahoma for inmates with a history of mental illness. Gordon is coming to the end of an 18-year stretch for flashing a .38 at her drug dealer in order to separate him from a pile of jewelry, cash and his Monte Carlo.

Now she frets over whether she will get carsick when she rides in the vehicle that will take her away from prison. She pauses and leans back in her seat, abruptly looking smaller, almost child-sized. “I'm scared,” she allows. “I'm really scared. I'm in no big hurry to get out of here, I'll tell you.”

Come next spring, whether Gordon likes it or not, she will get out, but unlike the majority of Oklahoma prisoners, she will not reenter the land of freedom without help. Because Gordon suffers from schizophrenia, she is eligible for counseling and life-management services as well as money for housing, clothing and food that Oklahoma offers to keep mentally ill ex-cons stable and less likely to return to prison.

Central to that program is ensuring that participants leave custody already signed up for Social Security Disability and Medicaid, which immediately provides them with some income and health care and – crucial for them – psychiatric medication and counseling.

By comparison, unless they are disabled in some way, typical inmates leaving prison in Oklahoma do not qualify for either Social Security or Medicaid benefits. Usually, they are given a lift to the bus station, a ticket to anywhere they want to go in the state, $50, and sometimes a handshake.

If the measure of success is keeping mentally ill ex-offenders out of prison, the Oklahoma Collaborative Mental Health Re-Entry Program has been a success. The recidivism rate over a three-year span for those participating in the program is 25.2 percent, compared to the 42.3 percent rate for a comparable prison population before the program started in 2007. On the basis of those results, the program earned an innovation award this year from the Council of State Governments.

Law enforcement is positive about the program as well. “Anything that keeps them on their medication and in treatment is a positive step,” says Phil Cotten, acting director of the Oklahoma Association of Chiefs of Police.

Not the least of those extolling the program are its beneficiaries, some of whom have no doubt about the boomerang route their post-prison life would have followed without the re-entry experiment.

“I would have ended up back in prison and addicted,” says Delisa Herbert, a 45-year old former prostitute, addict and drug-runner with a history of prison terms, the last couple for drug trafficking. As a child, she says she was beaten and molested and finally, at age 13, sold into prostitution by her mother. She was also diagnosed as bipolar and suffered from post-traumatic stress, which made her eligible for the re-entry program as her release neared three years ago.

When Robert Scott, the director of one of the four regional re-entry centers, visited Herbert months before her release and detailed what re-entry would provide, Herbert listened politely and didn't buy a word of it. “He told me all this stuff that sounded so great but was hardly believable,” she recalls. “People my whole life said, ‘I'm going to do this and this for you,' and then nothing happened.”

But plenty did happen this time. A member of Scott's staff picked her up at prison upon her release, and the re-entry team set her up with food, clothing and shelter. When she found a “felon friendly” apartment, the program paid the deposit and most of the rent for the first year. Re-entry also provided individual counseling and reintegration classes. “Every conversation was about me, my life, my safety, my hopes, my dreams, my wants, my hurts, my shames, and anything that needed to come out,” Herbert says. “They listened.”

Now, three years after her release, Herbert lives with two of her children in a spacious home in the upscale Nichols Hills section of Oklahoma City and works as the estate manager for William Kerr, the heir to an Oklahoma oil fortune, who, with his family, took a liking to Herbert when she waited tables at an IHOP restaurant after she left prison.

Like every other state, Oklahoma has seen a correlation between the emptying of its psychiatric hospitals in the sixties and seventies and its ever-increasing prison population. According to Oklahoma's Department of Corrections, half of its prisoners have a history of or currently exhibit some form of mental illness (resulting in a threefold increase in the number of prisoners receiving psychotropic drugs between 1998 and 2006). Some call it the criminalization of mental illness. In a different time, many of the symptomatic mentally ill ended up in psychiatric wards; today they go to prison, a situation that Robert Powitsky, the chief mental officer of the Oklahoma Department of Corrections, calls a “travesty.”

“The new front-line mental health workers are law enforcement officers and the new psychiatric hospitals are the prisons and the jails,” says Powitzky, who has spent most of his four-decade long career as a psychologist in prison systems. “It's wrong, it's just plain wrong.”

When Powitzky first came to Oklahoma in 1999, the state was under a federal court order to improve medical and mental health services to its prisoners. Powitzky had to build a corrections mental health infrastructure from scratch. He did so, but he also came to realize much of the work was undone after release. Parents would tell him that their child left prison more stable and grounded than in years, but was forced to wait three months or longer to get an appointment with a community mental health center. “By then,” says Powitzky, “he was off his meds and destabilized and in danger of being arrested again.”

The solution was to build a better bridge for this population between prison and life on the outside. The result was the creation of a $1 million-a-year re-entry program. To qualify, potential participants must be within six months of the end of their prison terms, have a diagnosis of serious mental illness and a course of medication, and be considered vulnerable for becoming symptomatic again even if presently stable. An essential element is much closer coordination and information-sharing between the Department of Corrections and the Department of Mental Health, which provides the funding and most of the manpower for the re-entry program.

Participants must also be considered sufficiently non-violent as not to be deemed a danger to the staff on the outside who will be dealing with them. Participation is voluntary. Nearly 160 ex-prisoners participated in the program in fiscal year 2012.

Warren Bishop, an inmate at the Joseph Harp Correctional Center a half hour south of Oklahoma City, signed on as soon as he was informed of the program. He's a seemingly timid man of 32 with prematurely gray hair and glasses who avoids eye contact. He's missing his front teeth, the result of a fall on his face when he tried to escape a drug arrest. His most serious charge was stealing a car in Oklahoma City in 2010. His release date is sometime after Thanksgiving.

Bishop has had various psychiatric diagnoses, including paranoid schizophrenia, schizo-affective disorder and depression. He hallucinates, or he did until he started taking thorazine in prison. “I don't hear voices now,” he says, “I don't see things that aren't there.”

On a previous release from prison, Bishop was lost on the outside. It wasn't long before he was off his medicine and back on drugs and in trouble. Now he takes every class the re-entry program offers him.

Bishop admits to being scared about leaving prison, but he is also optimistic because of the help the reentry program will provide. “I think everything will work out in my life,” he says, “if I have someone giving me a hand.”

Thanks to the success of the re-entry program, Oklahoma has received a three-year grant of $1.2 million from the federal Substance Abuse and Mental Health Services Administration that will make it possible to expand the effort.

In Powitzky's mind, the reentry program is a case of not only doing what's right and logical, but also doing what is financially prudent. For an individual, he said, “the most intensive, community-based [mental health] treatment costs $8,000 a year. Prison costs $24,000 a year.”