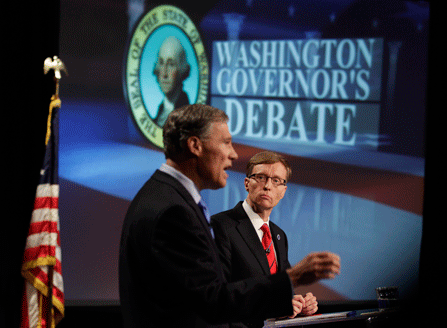 SEATTLE — With the state dramatically scaling back its funding, Superintendent Nick Brossoit has had to cut back on just about everything in the Edmonds School District. Everybody who works for the suburban Seattle district, including Brossoit, took five furlough days last year and will take another three this year. Brossoit eliminated programs for struggling students, foreign language classes and sections of advanced math and science courses. Parents helped pull weeds and trim bushes before the start of this school year, because the district halved its grounds keeping crew. Some science classrooms do not have enough lab stations or chairs for every student.

“It's almost like being in a wartime setting,” says Brossoit, the head of a group of parents and schools that sued the state in 2007 over insufficient funding. “We're hunkered down, waiting for air support.”

In January, Brossoit and other supporters of more state dollars for schools did get help from a higher power when the Washington Supreme Court ruled in that suit that Washington must find vast new sums of money to improve schools. The ruling, known as the McCleary decision, looms large in Washington's hotly contested race for governor.

School funding is playing an outsized role in the Washington gubernatorial race, even as the issue is receiving scant attention in other states. The Republican in the race, Attorney General Rob McKenna, has seized on education funding and accountability to broaden his appeal in a state that has had Democratic governors for 28 years. Meanwhile, a ballot measure that would allow 40 public charter schools in the state over the next five years has further focused the election on education.

But all the attention is no guarantee that Brossoit's air support will arrive soon. McKenna and his Democratic opponent Jay Inslee, a recently retired U.S. representative, are in no mood to raise taxes, and even they admit that their respective proposals to boost school spending will take time to implement.

Both candidates are banking on the state's weak economy roaring to life — and continuing to roar for several more years — to produce the hoped for education money. They also are depending on savings they hope to glean from more efficient state government, and on a significant amount of time to meet the mandate from the state Supreme Court.

“We do have to come up with money to fund basic education, not over the next two years, but over the next four biennia,” McKenna said at a debate last week across the street from the Space Needle. “That's what it's going to take to dig out of a hole that it took nearly 30 years digging ourselves into.”

Inslee is also looking for more time. “We'd all like to snap our fingers and satisfy McCleary immediately in the first 24 hours,” says the former congressman, “but we all know it's going to be a climb out of this economic hole.”

But critics say schools would get the money they need more quickly if the candidates were willing raise taxes or make major cuts in other areas. Tom Ahearne, the lead attorney for the parents and schools that brought the McCleary case, is fed up with the stalling tactics. His lawsuit came three decades after the high court last declared the state was not spending enough on schools, he notes.

Both lawsuits depended on the Washington Constitution and its provision that says, “It is the paramount duty of the state to make ample provision for the education of all children residing within its borders.”

The key question is how aggressively the high court will enforce its decision. For the next six years, according to the judges' ruling, legislators must deliver an annual report card on their progress. Lawmakers submitted their first report card to the court last month. In it, they acknowledged they “did not take further steps” to comply with the decision this year, although they did reject further budget cuts to education. Ahearne told the court the legislature's response was inadequate. The court has not announced how it will respond to the reports.

The judges also did not specify a dollar amount for complying with McCleary. Instead, they said the state should follow the steps outlined in a 2009 law that was passed while the case was in court. That law, the court wrote, “essentially put up the scaffolding for a new funding mechanism but left the finishings for a later day.” Estimates for how much that would cost vary widely, from about $1 billion every two years to $4 billion.

The McCleary decision could hardly have come at a worse time for officials in Olympia. For the last several years, state lawmakers have returned to the Capitol time and time again to plug holes in the budget. Whenever legislators thought they finally patched things up, it seemed, they would discover another source of red ink. Now, next spring's legislative session seems certain to be dominated by school funding questions.

If the gubernatorial campaign is any indication, any solution could be fraught with political risk.

As part of his plan, McKenna backed a proposal drafted by Democrats in the legislature to replace a patchwork system of local property taxes with a uniform state property tax to fund schools.

Even if the idea does not raise one extra cent in taxes, McKenna says it would help the state comply with the McCleary decision. After all, replacing local levies with a statewide levy would automatically boost the state's share of education spending.

But Inslee launched TV ads criticizing the move as a “gimmick” that would raise property taxes for people in 47 percent of school districts, because the levy would be uniform across the state.

“Talk is cheap. Action is what counts,” says Inslee. “I've got an action-oriented plan to do the things that are necessary to actually generate the money to be available for education.”

The Democrat wants to spur the local economy using a wide variety of industry-specific policy changes. The reinvigorated economy would bring more money into tax coffers in Olympia.

Inslee says he can redirect money from the rest of the state budget to education by holding down medical inflation in programs such as Medicaid and by using “lean management” techniques that improved efficiency in companies like Boeing, which is the state's largest private employer. He also promises to close unspecified tax “loopholes” that benefit corporations.

Explaining his plan during an interview with Stateline, Republican McKenna goes through a spreadsheet, pointing to columns of figures with amounts down to the dollar. The plan is built on state assumptions that revenue will grow by 4.5 percent a year for the next eight years. That growth rate is far from guaranteed, however: Since 2000, the state's economy has grown more than 4 percent a year only three times.

McKenna says he can hold the average growth of non-education spending to 3 percent a year and steer must of the rest of the additional revenue to schools.

“What I'm saying is it's time to put children first and fulfill our duty by prioritizing the budget for education,” he adds later. “It doesn't mean we have to make deep cuts to everything else in the budget.”

Both candidates enjoy support from prominent education groups, but the reasons for those endorsements go far beyond school funding.

The Washington Education Association (WEA), which has 82,000 members, and other teachers' unions have been some of Inslee's biggest allies throughout his political career.

WEA President Mary Lindquist says her members want someone who can put the brakes on charter schools, which in their view siphon too much money from traditional public schools. Her members also want someone who will support teacher evaluations that are not focused too heavily on test scores, according to Lindquist. She also expresses concern about McKenna's plans to limit social service spending, which she says would lead to more homeless, hungry and sick students.

The governor's race is a major priority for the union. “We've learned from Wisconsin and Ohio and Indiana and Michigan that you can't lose your goalies,” Lindquist says. “You've got to have someone there that you can work with to pass positive legislation. For us that's the (state) House and the governor's mansion.”

McKenna, meanwhile, highlights his endorsement from the state chapter of Stand for Children, a business-backed group that has clashed with teachers' unions in several states, on issues such as teacher evaluations, charter schools and strike rules. Shannon Campion, executive director of the Washington chapter, says the group “enthusiastically” endorsed McKenna even though it endorsed the current governor, Democrat Chris Gregoire, in past elections.

“With Rob, you have a sense of intense intellectual horsepower,” Campion says. “He has a hunger to learn and know more about complex problems.”

Campion says she has talked to many longtime Democrats, like herself, who feel comfortable with McKenna because he seems to be a moderate on social issues such as same-sex marriage and abortion. That makes them more receptive to hearing his ideas on improving schools, she says.

No matter how the election turns out, the Edmonds School District and other schools across the state face a future — at least in the short term —of having to do more with less. “Teachers are not going to hang white flags out of their windows,” Brossoit says.