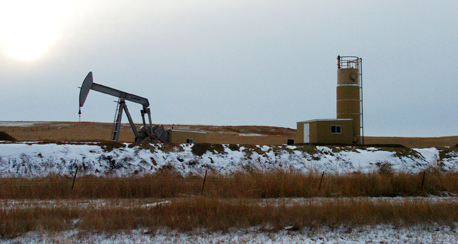 The town of Sidney in northeastern Montana is at the center of an oil boom that has brought thousands of new residents to the region. The rush has helped the Montana economy far from the oil fields and has become a major issue in this year's race for governor. (AP)

BILLINGS, Montana — Even though the oil boom is five hours northeast of here, near the Canadian border, its effects are evident all over Montana's largest city. Hotel rooms are hard to find. Classrooms are swelling with new students. Jobs are plentiful. And when voters in Billings discuss who should be Montana's next governor, the talk inevitably turns to Bakken oil.

The top candidates in Montana's neck-and-neck gubernatorial race both have trotted out ideas for how best to manage drilling in Montana's share of the Bakken rock formation, the oil field that stretches into North Dakota and Canada that has become a hotbed of drilling in recent years because of new rock fracturing technology. Democrat Steve Bullock and Republican Rick Hill have competing plans for how to meet the sudden demand for better roads, new sewers and bigger schools. And, of course, they offer different ideas of how to spend the state's new, oil-infused budget surplus.

With a commodity-driven economy, Montana often has been at the mercy of boom-and-bust cycles. The same oil fields that are going gangbusters today also saw a boom in the early 1980s before petering out because of low oil prices. The difference is that Bakken oil wells are now pumping four times as much crude as they did in their previous heyday, and forecasters predict the current boom will last at least a decade.

So the challenge for the next Montana governor will be to capitalize on the current surge, build infrastructure to keep it going and develop industries that will make Montana less susceptible to the ups and downs of the commodities markets.

Republican Rick Hill, who served two terms in Congress more than a decade ago, says the oil boom is still in an “embryonic stage” in Montana. He wants to streamline the permitting process for building wells, mines and windmills. Hill says Montana's vast array of resources — including oil, wind, natural gas, gold, silver, copper, palladium and timber — make it difficult for state regulators to keep up. He wants to bring in outside experts who will speed the process along.

“We know there are more oil opportunities beyond the Bakken field, and we believe we ought to work aggressively with people in order to pursue that,” Hill says, adding that he also wants to promote coal and wind development, too.

Steve Bullock, the state's attorney general and the Democratic nominee for governor, takes a different approach. He has outlined plans to encourage oil production, but he notes that agriculture is still the state's top industry. Bullock is concerned that 85 percent of Montana wheat leaves the state in raw form. “Why don't we mill the grains here?” he asks. “Why don't we create the finished products?”

Bullock's political fortunes are tied to the legacy of Governor Brian Schweitzer, a fellow Democrat who developed a reputation as a bolo-tie-wearing showman and as a supporter of the coal and oil industries. Both Bullock and Schweitzer won traditionally Republican Yellowstone County, where Billings is located, four years ago, but Schweitzer carried it with a far bigger margin.

The Democrats, Bullock says, have managed the boom well. The state is bringing in more money from mining, drilling and logging on state lands than it did under Republican control, he says, and Montana's permitting process works faster than in neighboring North Dakota or Wyoming. “The idea that the system is broken, which is a lot of what my opponent is saying,” Bullock says, “is just hogwash.”

There is no escaping the close ties the Billings economy has with the energy industry. Plumes rise from the smokestacks of two small oil refineries and a coal-fired electric power plant just across the Yellowstone River from the cliffs that hem in the town.

But ask at the local chamber of commerce about the benefits of Bakken oil, and it is clear they go well beyond the petroleum industry. “Go out to our Wal-Mart or our Costco on the weekend. Take a look at the license plates. There's a lot of them from eastern Montana and western North Dakota,” says Bruce MacIntyre, the chamber's director of business advocacy and government affairs. “They come over here and shop. They come over here for recreation. They come over here for medical (care). You have to get away from the rat race over there (in the Bakken), and Billings is a nice place to do it.”

Lorne Wallace, president of CASS Homes, is looking for workers. The company's factory on the west side of town hired its first employees in June. Today, some 50 workers erect buildings in what is basically an indoor construction site. The employees are working on platforms 18 feet wide and 80 feet long—roughly double the length and width of a typical semi trailer. When completed, each will be shipped off on truck beds to become apartment buildings, banks or hotels. Most are headed to the oil boomtowns in Canada and North Dakota.

Eventually, Wallace would like to expand the company's workforce to 80, and he is looking as far away as Arizona and Nevada to fill those slots. Workers are harder to find closer to home, because so many skilled tradesmen have left for the Bakken. But, of course, that is the same migration that is fueling CASS Homes' quick growth.

Not far away, at the headquarters of Whitewood Transport, a nationwide trucking company, brokerage manager Michael Pizzolato says the company's traffic in and out of North Dakota in the last three years has tripled. Whitewood's red and white rigs truck in concrete, bridge beams, cranes, bulldozers, mining equipment and other heavy machinery. “Just about anything relating to them building up that community up there,” he says, “we haul it in, we haul it out. If it breaks, we haul it back.”

The company is planning on consistent business from the Bakken oil fields over the next five years, including a shift to development in eastern Montana, Pizzolato says.

But all the growth is putting a strain on local communities. Country roads are handling loads they were never designed to carry. The town of Sidney, at the center of the boom in northeastern Montana, has outgrown its sewer lagoon, hampering its growth. Even the relatively large city of Billings has seen an increase of more than 300 students each of the last two years, the equivalent of adding two schools worth of children.

Montana's tax structure makes it harder to devote resources to those new needs. For starters, the state has no sales tax. And the royalties it collects from oil do not start flowing to the state until a year and a half after a drilling site is running. Once the money does come in, half of it goes to the state government. The remaining half is largely divided between the local county and schools. That leaves cities and neighboring counties with relatively few resources to cope with new demands.

Hill, the Republican, says the difficulties are “mostly a timing problem.” He wants to let localities borrow against their future tax receipts to build infrastructure today. He also wants to redirect coal taxes that now go into a massive trust fund for a decade, and allocate that money for infrastructure improvements instead. Bullock, the Democrat, wants the state to offer revolving funds to help cities and other localities. Both men also favor changing the way schools are funded, because the current system protects schools with declining enrollments rather than directing money to meet sudden increases.

The improving state economy has brightened Montana's budget picture. In fact, the biggest budget-related question on the campaign trail is what to do with the state's $450 million surplus. Bullock wants to use it to fund a one-time property tax break for homeowners; Hill favors a broader, and permanent, property tax break.

Hill and Bullock disagree on the approach, but both are looking for ways to build a more robust economy during the current boom. “You don't want to be tied to boom and bust,” Bullock says. “You want to take advantage of those opportunities. But you also want to look longer-term to further build the economy.”