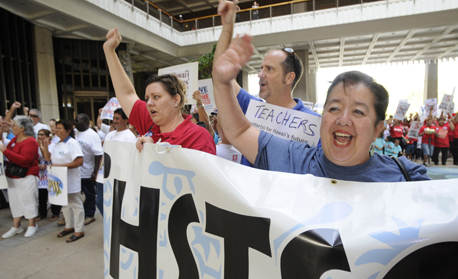 Hawaii teachers express their solidarity at a protest meeting in Honolulu in 2011. (Associated Press)

When Nikan Arapoff took his job as a seventh grade history teacher on Maui in 2005, he studied the pay raise schedule and determined that he and his wife would finally be able to afford a modest house on the expensive Hawaiian island. Now they have two young children, his house value has tanked and he's scrambling to make payments, supplementing his teaching income with odd jobs as a tutor and gardener.

Arapoff blames a knock-down-drag-out fight with Democratic Governor Neil Abercrombie that has left teachers without a contract since July 2011. At that time, Abercrombie imposed the terms of a “last, best and final offer” that included a 5 percent pay cut and increased health care contributions by workers. Other public employee unions had already agreed to the same terms, a result of the $1.3 billion budget gap for the biennium that Abercrombie inherited when he took office in December 2010.

Hawaii is a collective bargaining stronghold, one of a handful of states to embed such rights in its constitution, and this is the first time in the state's history that the terms of a public employee labor contract have been imposed rather than agreed to at the bargaining table. Arapoff now feels so resentful that he's prepared to strike even though doing so would require him to take out a loan to meet basic expenses.

The Hawaii State Teachers Association, the union that represents Arapoff and the 13,000 teachers who make up Hawaii's statewide school district, walked away from federal mediation on October 4. Both sides had agreed to bring in a mediator from the Federal Mediation and Conciliation Service to help resolve the dispute, but the process got nowhere.

“They kept coming to the table with worse and worse offers,” Arapoff says. “It just kept mutating and morphing into an even more sorry state of affairs. It's beginning to seem like our only option is to strike and that's something we really don't want to do.”

The union has filed an unfair labor practice complaint with the state's Labor Relations Board, and that complaint has been pending for more than a year. In September, the teachers filed a petition asking the Hawaii Supreme Court to force the board to rule on the complaint. State law prohibits them from striking before the labor board has issued a decision.

Both sides accuse the other of being intractable and unreasonable. In a terse statement announcing the breakdown of mediation, Governor Abercrombie faulted the union for walking away: “We continue to remain willing to engage in mediation,” he said. “It is impossible to negotiate with people who refuse to talk.”

There is considerable irony in this situation. Abercrombie has been known for decades in Hawaii politics as an outspoken liberal and a friend of unions. The teachers supported him in his 2010 campaign. But the once-close ties between the governor and the teachers have atrophied in the current dispute.

The hurt feelings on both sides run deep. In backing Abercrombie for governor, the teachers relied in part on his promise to end “furlough Fridays,” a cost-cutting measure taken under former Governor Linda Lingle that kept students out of school for 17 Fridays during the school year and cut teachers' pay by 8 percent. But in the contract that was imposed in July 2011, Abercrombie included 7 days of “directed leave without pay” that the union says are just furloughs by a different name. He also added a 1.5 percent salary reduction. The net result for teachers was a 5 percent salary cut, in addition to an increase in required employee health care contributions.

The governor's aides say they are disappointed that they had to impose a final offer on a unilateral basis. But they say the teachers union had tentatively agreed to that offer, then backed out of the deal. Teachers lost the opportunity to vote on the contract when the union's board rejected terms that their negotiators had already agreed to. Delaying a decision any longer, the governor insists, might have caused a disruption in student learning because of the quickly approaching start of the school year.

“The rights of Hawai'i workers to collectively bargain are embedded in the State Constitution,” the governor's website says. “Governor Abercrombie has been and will always be a champion of the rights of working people and the need for collective bargaining. But while the people of Hawai'i want to hold on to core values, they also want to change the ways that government operates to better address our current and future challenges.”

“It's the first time in 40 years of bargaining in the state of Hawaii that any governor imposed a contract,” Camacho says. “The whole point about collective bargaining is for the parties to come together and negotiate a contract that both sides can agree with.  We're concerned about the type of precedent that could be set not just for teachers for all public employees." Camacho emphasizes that a strike is viewed as a last resort and that teachers remain willing to engage with the administration even though they halted the federal mediation process.

Other public sector unions are watching the drama unfold with trepidation for their own futures. But support for the teachers is far from universal among those unions. J.N. Musto, executive director of the University of Hawaii Professional Assembly, which represents the state's public higher education faculty, says the Teachers Association's legal strategy and tactics come with major risks for all public sector unions. He's worried about a potential backlash in the legislature aimed at curtailing the scope of collective bargaining rights in Hawaii or putting an end to them altogether. Major changes to the scope and structure of collective bargaining in Hawaii would involve a vote of the people because they would require constitutional amendments.

"It's not that we're worried that we wouldn't be able to win that battle, but we don't want to waste the resources to fight it,” Musto says. “It's totally unfair to infer that this is happening because of any underlying flaw with collective bargaining.”

Musto says the teachers' complaint has been stuck in the state Labor Relations Board for nearly a year in part because the board hoped that the governor and the union would resolve the issue without board intervention. “They could have forced the hearings to proceed much faster,” he says. “They were under the impression that somehow miraculously the parties would get together and come to a decision.”

Hawaii teachers have been paying close attention to their counterparts in Chicago. The recent weeklong teacher strike there has emboldened some Hawaii teachers because they say they are paid far less and have a much higher cost of living. “Chicago teachers won concessions pretty quickly and were able to use the strike to get some respect,” Arapoff says. “All we really want is a decent living wage, but even more than that, we want some respect.”