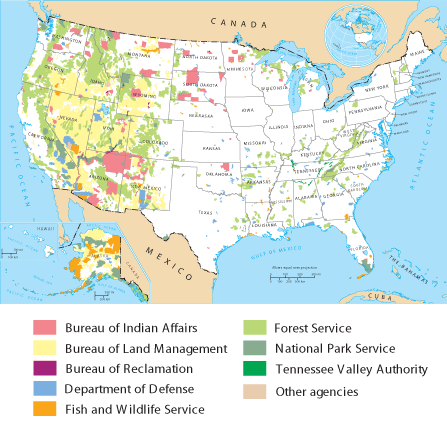 When Chester Crandall looks at a map of the United States, he sees a century of injustice: a rough line drawn through Montana, Wyoming, Colorado and New Mexico that imposes federal control over most of the land west of it. “When you hit that line, there seems to be a tremendous amount of land that we don't own,” says the Arizona state representative.

That perception, of course, is correct. Beyond the line, states in the mountain west have very little say over the use of the property within their borders. That includes 70 percent of Arizona and virtually all of Nevada. States and localities can't tax those federal lands or control their development, though federal payments help local governments make up the losses.

The same rules of ownership have been in place for more than a century — ever since statehood in most cases — but they grate on Crandall and some of his Republican colleagues. They see missed opportunities in that history: lost chances to spur Arizona's mining and timber industries and to collect tax revenue that would go to schools and other strapped state programs. What's more, the lawmakers say, coercive environmental laws and sluggish bureaucracy have held up the federal government's own attempts to develop certain lands.

Crandall may not be able to do much about the situation, but he is determined to make a statement. He is pushing a ballot initiative, Proposition 120, which would grant his state “sovereign and exclusive authority over the air, water, public lands, minerals and all other natural resources within its boundaries.” The measure is strongly opposed by environmental groups and could add another costly court dispute to Arizona's growing list of legal bills.

Crandall and his allies are heirs to the Sagebrush Rebellion, the mostly rhetorical revolt against federal land policy that spread quickly through western states in the 1970s and 1980s.

Arizona isn't the only place in which a Sagebrush Revival is stirring. In Utah last March, Republican Governor Gary Herbert signed off on a law threatening to sue the federal government unless it returns 30 million acres of land by 2015. Among several complaints about regulation on public lands, Herbert and other western governors are wary of federal policy on oil and gas drilling.

But Crandall's amendment is the most sweeping effort currently on the table. It wouldn't just take the federal government to court — it would rewrite the state constitution and potentially alter the very conditions of statehood. It would affect as many as 25 million acres of land, everything that falls within state borders except for tribal property and a small subset of federal land including forts and arsenals. “The people of Arizona can manage their resources just as well as bureaucrats in Washington, D.C,” Crandall contends.

But whether Arizona's government has the wherewithal to regulate such vast swaths of new land is debatable. Even Governor Jan Brewer, the Republican widely known for her clashes with the federal government on immigration and abortion law, appears skeptical. In May, Brewer vetoed a bill similar to Proposition 120, saying the state lacked the resources to manage the new land, a job which she estimated would cost $1 per acre.

“As a staunch advocate for sovereignty, we must still be mindful and respectful of our federal system,” she wrote. “I understand and share Arizona's frustration in trying to manage our natural resources with our various partners; however this legislation is not the answer.” Brewer has not taken a formal position on Proposition 120.

Crandall's answer to such criticisms is that Arizona could address fiscal issues after guaranteeing its right to the public lands, perhaps using new tax revenue to fund its oversight.

Environmentalists find themselves in rare agreement with the governor. “It was nice to see that she recognized how extreme and ridiculous this thing was,” says Sandy Bahr, director of the Sierra Club's Grand Canyon chapter, one of 20 groups lined up to oppose Proposition 120, which they describe as a “land grab.”

“Our legislature cannot even manage its state parks,” says Bahr, referring to the legislature's recent moves to slash funding for Arizona's struggling 30-park system and sweep park revenue into the state's general fund. “How would it address these public lands?”

Environmental groups believe the majority of Arizonans are on their side, pointing to a 2012 Colorado College poll in which 90 percent of those surveyed agreed that “our national parks, forests, monuments, and wildlife areas are an essential part of Arizona's economy.”

Lurking behind all this discussion is an issue that may be the most consequential of all: It's not likely that Proposition 120 will change anything even if it passes.

It would run afoul of Congress' constitutionally guaranteed “Power to dispose of and make all needful Rules and Regulations respecting the Territory or other Property belonging to the United States.” It would collide with the preemption doctrine, derived from the Constitution's Supremacy Clause, which guarantees that any federal law trumps a conflicting state law. Very few legal experts believe the measure would get very far in court.

“It's very clear from past Supreme Court decisions that the power of Congress on the preemption clause is very broad,” says John Lacy, an expert on public lands at the University of Arizona. “It may well pass,” he says of the proposal, “but the question is, does it mean anything?”

One thing it probably would mean is a costly court battle. When Utah passed its public lands bill threatening to sue the federal government, the legislature set aside $3 million in anticipation of a protracted legal dispute. Crandall says Arizona might have to set aside $5 million to $10 million for litigation. He acknowledges the difficulties his proposal faces, but says sovereignty is worth fighting for — even if the proposal merely amounts to a political statement.

“Will [Proposition 120] by itself do something? No,” Crandall says. “This is just one step. It sends a message…that the people have spoken.”