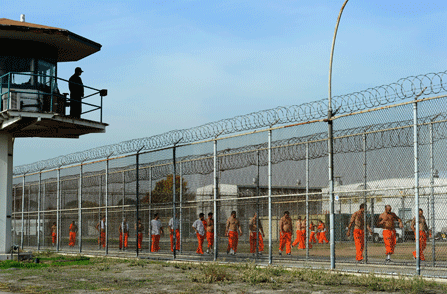 California inmates will be counted at their last known address in the next redistricting cycle. (Getty)

Nearly 20 percent of all the people in Maryland's House of Delegates District 2B, which is about an hour and a half from Washington, D.C., are incarcerated in a state prison. In California's 30th Assembly District in the Central Valley, 8.6 percent of the population is locked up. New York's Senate District 45, in the northeastern corner of the state, is home to 13 prisons and more than 14,000 prisoners, or nearly 5 percent of the total population of the district.

The U.S. Census Bureau counts prisoners at their incarceration addresses rather than at their last known home addresses. For federal funding, the distinction doesn't matter much, since most grants are distributed to an entire state based on its population, and not by legislative district.

But even though prisoners can't vote, counting them as “residents” of prisons can make a difference when it comes to determining how much representation a particular area will have in the state legislature.

Four states have taken action recently to address the issue. Since 2010, Maryland, New York, Delaware and California have passed laws to adjust the census tallies and count prisoners at their last known home addresses for purposes of redistricting.

Supporters of the change say that counting the inmates at their home addresses rather than in prison will put a stop to “prison-based gerrymandering” that gives rural areas with prisons more representation than they deserve. The U.S. Supreme Court has affirmed the right of states to adjust census data for redistricting purposes, which could encourage more of them to change their count for the 2020 census.

But others question whether the heavy administrative workload is worth the effort. Some also insist that prisoner redistricting will have limited political effect. “The legislation has an impact, but not a partisan impact,” says Justin Levitt, a redistricting expert and associate professor at Loyola Law School in Los Angeles. “This reallocates what the districts look like, but it doesn't drive them to be more Democrat or Republican.”

This November, voters in New York and Maryland will be casting ballots in the reallocated districts, but it may be hard to tell if that change influences any results, explains Peter Wagner, executive director of Prisoners of the Census, which advocates for reallocation of prisoners.

Regardless of political outcomes, prisoner reallocation is seen by many as an issue of fairness. “Even marginal impact is justice to the individuals in question,” says Levitt.  “Much like every vote counts even when single votes rarely decide elections, every bit of representation counts even when people don't feel the change in boundaries.”

So far, only Maryland and New York have reallocated prisoners to reflect the 2010 census, and their experiences have been somewhat different.

New York's legislation was arguably passed for partisan reasons after Democrats won control of both the Senate and the Assembly in 2008. Democrats hoped that if they reallocated prisoners from their incarceration addresses upstate to their assumed last-known addresses downstate, the reallocation might give New York City and its environs—a solidly Democratic area—more representatives in Albany.

But after much litigation and partisan wrangling, the new maps are not that much different than the old ones. “Every county received some prisoners back,” says Debra Levine, co-chair of New York's legislative task force on demographic research and reapportionment. “Certainly a lot were allocated to New York City, but there really was no significant (population) impact.”

The resulting number of prisoners reallocated was relatively small, according to an analysis from The New York World, a new online publication launched by the Columbia University Graduate School of Journalism. The net loss upstate was 38,404 residents, while the net gain downstate was 20,112 residents.

Getting to that number was not easy, says Levine.  There was no consistency in the type of addresses a prisoner listed, and many prisoners listed multiple addresses without identifying which one was a home address or family member's address.  Redistricting administrators also had trouble matching the different ethnicity categories used by the U.S. Census Bureau and the state department of corrections, and were forced to make a lot of interpretations of the data.

The amount of work to pull this off for the 2010 redistricting cycle, says Levine, was “really unbelievable.” At least New York could use its own redistricting officials to do the job; Maryland had to spend about $50,000 on outside contractors.

“I'm glad we didn't spend the money and could do it in-house, but it's a very expensive process and it was very time consuming,” Levine says. “The staff felt pressure, but we did it, although it wasn't easy.”

The Maryland plan, though less tinged by partisanship, still faced careful scrutiny. “This bill kept me up at night,” says Delegate Joseline Pena-Melnyk, who sponsored the bill. “They fought me hard on the House of Delegates floor, maybe for 45 minutes, with all kinds of questions. It's a political change and people are concerned about whether they'll be reelected, but that shouldn't supersede doing what's right and fair.”

After all that, Maryland's reallocation ended up having little impact. Washington County, home to Maryland Correctional Institution-Hagerstown in District 2B, lost 5,386 prisoners, or about 3.3 percent of its population. Baltimore got back about 8,000 residents in the reallocation, helping it offset its population decline, albeit slightly.

For Pena-Melnyk, who also has a large state prison in her district, the imbalance before the reallocation was simply unfair. “The eastern and western Maryland districts … benefitted from the population,” says Pena-Melnyk, “but the prisoners don't use the roads or the schools. This was just a fairness and justice issue.”

Expanding across the country?

The next redistricting cycle is not until 2020, but California and Delaware already have passed legislation to reallocate prisoners back to their home addresses, and similar bills are pending in at least 10 other states. Given enough time, Loyola's Levitt says, many of the administrative headaches that plagued New York and Maryland's processes should not be problems for other states.

“There was a fair amount of delay before administrators could even carry out the law (in Maryland and New York) because of legal challenges,” says Levitt, “and there was a little bit of a crunch because of the deadlines for the 2010 cycle. So the problems are not necessarily inherent in the policy, it was more of a crunch caused by legal realities. But any new data implementation is going to take work.”

Advocates also are hopeful that the U.S. Census Bureau will start counting prisoners at their last known address rather than where they're incarcerated, which would make it simple for states to factor prisoners into redistricting. In the 2010 redistricting cycle, the Census helped states match districts and prisons by speeding up the release of its Advanced Group Quarters data, which counts populations in institutions, including prisons, universities, nursing homes or other group settings. This made it possible for New York and Maryland to complete their redistricting maps with reallocated prisoners on time.

“All of this would be logistically easier if the U.S. Census Bureau were able to take on the reallocation rather than the states,” Levitt says, “since they're the entity best geared to take on this change. When some big states like New York and California say that it would be easier for Census Bureau to reallocate prisoners, I think that's an important step.”