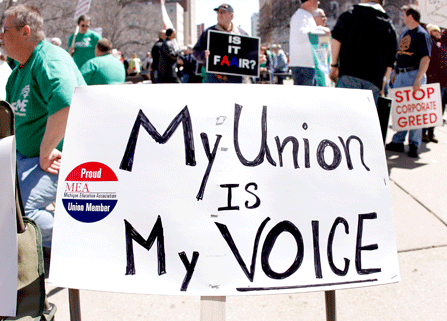 Labor unions in Michigan have escaped the broad-based attacks their neighbors in Wisconsin and Ohio have experienced in the past couple of years. Michigan's public sector unions still have the right to bargain collectively with their employers about the terms and conditions of their employment. There is no immediate prospect of a statewide “right-to-work” measure making it illegal to impose union fees as a condition of employment.

But Michigan unions, which remain a formidable force in state and local politics, are going on the offensive in an effort to make sure things stay that way. A measure on the November 6 ballot, Proposal 2, would enshrine collective bargaining rights in the state constitution and invalidate all past and future laws that restrict those rights. The most recent polling shows a close division, with 48 percent of voters in favor of the proposal and 43 percent against, according to the firm EPIC-MRA. A yes vote could embolden unions to pursue a similar strategy in other states where union support is relatively strong.

Nick Ciaramitaro, director of legislation and public policy for American Federation of State, County and Municipal Employees Council 2, says the Michigan legislature has given unions a host of reasons to be proactive. “Unlike other states where they stripped collective bargaining from whole segments, Michigan's Republicans took a different tack,” he says. “They whittled away at it. They said, ‘You can't bargain over this and you can't bargain over that.' The result has been something that's quite frankly been wasteful for both sides.”

The legislation that has irked Michigan unions includes changes to teacher tenure, new rules governing who is laid off first when the economy tanks, and a law tied up in court that prohibits school districts from deducting union fees from school employees' paychecks.

Ciaramitaro says that while Republican Governor Rick Snyder has maintained a better relationship with unions in Michigan than neighboring governors Scott Walker in Wisconsin and John Kasich in Ohio, he has disappointed them in significant ways. “He has tried to be more conciliatory than some of the more strident forces in the legislature, but he could have been more helpful in a leadership role instead of giving in to those forces on certain issues,” Ciaramitaro says.

Michigan Budget Director John Nixon says the Snyder administration is in favor of collective bargaining but has significant concerns about the potential price tag and unintended consequences of Proposal 2. “We like bargaining with our employee unions, but you've got to have the right balance,” he says. Of particular concern, he says, is the possibility that state efforts to place limits on financial commitments made to retirees would be thrown into jeopardy if the measure were to pass.

Proposal 2's goals reach far beyond the current administration's life span, which is one of the reasons both sides are expected to spend unusually large sums of money on it. The measure's long-term implications also help explain why right-to-work legislation is a significant part of the debate even though Snyder has been vocal in discouraging legislators from pursuing it.

“That doesn't necessarily offer solace to the public sector unions who think that the conservatives in the legislature could still fiddle around with right-to-work,” says Craig Ruff, a public policy consultant and former Republican gubernatorial adviser. “They also surmise that a future Republican governor could be far more likely to tackle right-to-work than the current one. They want something that will have lasting power."

Lasting power is what the opponents of Proposal 2 are most afraid of. The language in the ballot measure goes much further than just protecting the status quo — and further than the handful of other states that make some reference to collective bargaining rights in their constitutions. “The pro side is selling this just as putting collective bargaining in the Constitution,” says Don Wotruba, deputy director of the Michigan Association of School Boards, which opposes the measure. “If that's what it was, we probably would have supported it. Our issue is making sure there is a balance between how far management can go and how far labor can go.”

Proposal 2 says that “no existing or future law of the State or its political subdivisions shall abridge, impair or limit” the rights included in the measure, including the right to bargain collectively for wages, hours and other terms and conditions of employment.

Republican Attorney General Bill Schuette, a vocal opponent of the measure who asked the courts to keep it off the ballot on the grounds that it is overly broad, has pointed to 170 state laws and 18 constitutional provisions that he says would be subject to challenge if Proposal 2 were to succeed. The laws in question involve everything from the legislature's ability to appropriate money to recent changes to retirement benefits and the ability of school districts to discipline problem employees. “Voters shouldn't have to guess what a proposed constitutional amendment would do," says Nick De Leeuw, a spokesman for Citizens Protecting Michigan's Constitution, a business-backed coalition opposing the amendment.

In a summary of Proposal 2, the Citizens Research Council of Michigan, a nonpartisan research group, argues that it would have a significant impact on the cost of government, and, in the end, the quantity and quality of public services available. “In a period of declining revenues, the increased costs that could result from this proposal could well have the perverse effect of increasing pressure on state and local government officials to cease provision of some services or move work to lower-cost private sector providers,” the report says.

Other measures on this year's Michigan ballot have gotten more attention, including one that would repeal the state' emergency manager law, which gives state-appointed managers broad powers to intervene in the affairs of fiscally distressed municipalities, as Stateline has reported. But most legal experts believe that Proposal 2 would also overturn that law and prevent legislators from implementing similar programs in the future.

“You'd have this crippling dilemma of near bankrupt school districts and cities who would have to honor commitments made by predecessor politicians at the cost of running current public services,” says Ruff, the political consultant. “You can't do both. You can't pay off legacy costs and run as many police cars and other public services as you need. It would be a very rough financial course for people living in financially unstable places.”

Nixon, the state budget director, is concerned about the combined effect of Proposal 2 and another ballot measure that would require a two-thirds vote of both chambers of the legislature or a vote of the people in order to raise taxes. It would create significant spending pressures without any ability to pay for them, he says. “I'm not going to say it would be the end of Michigan, but [it would] create a very, very difficult environment to operate in.”