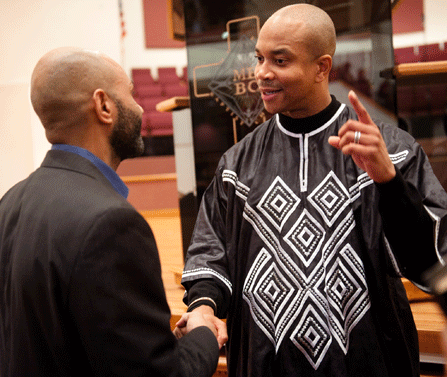 The Rev. Delman Coates (right), a Baptist minister in Maryland, was instrumental in pushing for passage of a gay marriage law in that state earlier this year. (AP)

The Rev. Delman Coates remembers how the long stalemate over gay marriage was finally broken in the Maryland General Assembly. He remembers because he helped to break it.

Coates, a black minister who heads an 8,000-member Baptist church, decided in February to publicly support a bill to allow same-sex marriage. The same proposal had failed in the legislature the year before. But Coates testified alongside Governor Martin O'Malley in front of a legislative committee in favor of the bill. Black ministers have been some of the most vocal critics of same-sex marriage in Maryland, so the symbolism of having a prominent black pastor on the other side was lost on no one. Coates also talked to individual lawmakers and helped sway a few on the eve of the vote. In the end, lawmakers approved the measure and O'Malley signed it March 1.

Coates' involvement was risky for a black minister. He says some colleagues called it “professional suicide.” But the results, Coates says, have been largely positive. “We've had a thousand people join our church thus far this year,” he says, “which says to me that oftentimes people in the pews are further along than those of us in the pulpit.”

In just the last year, attitudes of black voters toward same-sex marriage have shifted faster than those of the general population, both in Maryland and nationally. The size of that shift could decide whether same-sex couples can marry in Maryland, because opponents of the law gathered enough signatures to put its fate on the ballot in November.

Maryland has one of the biggest proportions of black voters in the country. One in four Maryland voters is black, and unlike most other states with large black populations, Maryland is solidly Democratic. That means black voters, nearly all of whom are Democrats, play a pivotal role in any statewide election.

The results of next month's gay marriage referendum in Maryland could have national implications. No state has ever supported gay marriage by popular vote. By contrast, 32 states have rejected it. Four more will be considering the issue on November 6 — Maine, Minnesota and Washington, in addition to Maryland. Because Maryland's polls close the earliest, it could be the first to legalize same-sex marriage with a popular vote.

And if African-American voters put the measure over the top, it would be a major change from the California vote four years ago, in which blacks and Latinos were initially blamed for passage of Proposition 8, banning same-sex marriages there.

‘Not an hour for sidelines'

The Rev.Derek McCoy, a black minister who chairs the Maryland Marriage Alliance, is on the other side from Delman Coates. “We are out there saying people have the right to live how they want to live,” he says, “they just don't have the right to redefine marriage for everybody.”

McCoy is especially troubled by how the law might affect people's rights to express their disapproval of same-sex marriage. In other states, he says, businesses have been fined or investigated for not treating same-sex couples the same as opposite-sex couples. Meanwhile, he says, people who defend the traditional definition of marriage are attacked for expressing their views.

But in a presidential election year, McCoy is telling followers not to be discouraged. He says some pastors told him they want to sit the election out, because they support President Obama but oppose his recently announced stance in favor of same-sex marriage. “This is not an hour for sidelines. This not an hour to sit this one out,” McCoy says. “People died for the right to vote. There's no ‘sit this one out.'”

In the end, McCoy thinks the same-sex marriage question will drive more people to the ballot box than even the presidential contest. Obama will almost certainly win Maryland, but the fate of the marriage law is a lot less sure.

Maryland voters in general seem to be growing more receptive to the idea of same-sex marriage. Polls by The Washington Post show support increased from 35 percent eight years ago to 50 percent in January. At the beginning of the year, though, the racial differences were stark. Among white Democrats, 71 percent supported same-sex marriage. Approval among black Democrats was 41 percent.

Numerous polls taken since then show a major shift in the black community. An automated May survey from Public Policy Polling found that support for same-sex marriage among all voters had jumped by 12 points just since March. “The movement over the last two months,” wrote PPP director Tom Jensen at the time, “can be explained almost entirely by a major shift in opinion about same-sex marriage among black voters.”

“Maryland has been down the middle on the same-sex issue for a relatively long time,” says Keith Haller, president of the Maryland polling firm Potomac Incorporated. “But … the controversy has been lessened by more and more establishment figures coming out in favor of it.”

President Obama's May announcement that he backed same-sex marriage carried the most weight, Haller says, but advocacy by the governor and other state officials helped move the needle too. “It certainly softened the blow. It lowered the temperature. It's made it more palatable for lots of people that might have been in the middle.”

Kevin Nix, a spokesman for Marylanders for Marriage Equality, says momentum is on the side of same-sex marriage. “This is a new world,” he says, pointing to the developments since the passage of California's Proposition 8. The California law is in legal jeopardy, several state courts or legislatures have approved same-sex marriage, national Democrats made it part of their party platform and national polls show increased support for the idea.

Even though the presidential election is a virtual lock for Obama in Maryland, the marriage law must compete for attention with several other highly visible initiatives this campaign season.

Conservatives are also challenging the Maryland Dream Act, a law to let certain undocumented students qualify for in-state tuition at public universities. The Dream Act is polling better than same-sex marriage, and its chief proponents are also backing the same-sex marriage law. “We in the Latino community, we value family,” says Gustavo Torres, executive director of Casa de Maryland. “Regardless of whether it's two persons of the same sex, it's a family and they have kids.”

Another ballot measure on whether to expand gambling has attracted $32 million in spending, mostly on TV ads, a virtually unheard-of sum for ballot measures in the state. Both sides in the marriage debate could find it difficult to get their message out with voters inundated on the gambling question.

Haller, the Maryland pollster, says the situation favors proponents of the same-sex marriage law and the Dream Act. Conservatives who initially promised to fight both have not yet weighed in with serious financial resources, he says, probably because they would find it so hard to reach people in the middle of the gambling fight. On the other hand, Haller says, there is a “a pretty potent, focused, liberal or progressive coalition that has come together to push both of these ballot measures.”

Meanwhile, both sides of the marriage question are being careful not to alienate black voters.

Coates, the minister supporting the change, counters that blacks do not appreciate attempts to drive a wedge between gays and blacks on questions of private morality. “The Bible,” Coates declares, “says more about how we ought to treat and care for the poor than it does about the choices people make in the privacy of their bedrooms.''