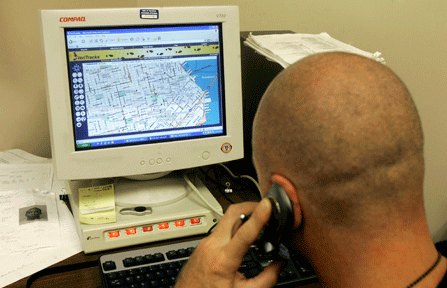 Six years ago, Congress passed the Adam Walsh Act, aimed at setting up a uniform national registry to track known sex offenders as they move around the country. The law offers states federal funds to complete their part of the job, and 16 have secured Justice Department approval for doing it successfully. But most states have struggled to implement the law, and several have essentially abandoned efforts at compliance and left the federal money on the table.

States that did not implement their registries by July 27, 2011, face a 10 percent loss in federal justice assistance grants, which fund courts, crime labs, corrections and other law enforcement programs. The only way they can keep that money without meeting the deadline is to apply to use it for Adam Walsh Act compliance activities. Some 29 noncompliant states have agreed to do this.

“We're hoping that in the future, some of those five will indeed apply,” says Linda Baldwin, director of the Office of Sex Offender Sentencing, Monitoring, Apprehending, Registering and Tracking within the U.S. Department of Justice. Not applying to use the grant monies for compliance is “not necessarily a refusal,” Baldwin says. States will get another chance to use their grants for compliance in 2013.

But by then, there may be changes to the federal law, which is named for a child who was kidnapped and later murdered in south Florida in 1981. (The registry provisions of the Adam Walsh Act are formally known as the Sex Offender Registration and Notification Act, or SORNA.) In August, the U.S. House passed a reauthorization of Adam Walsh specifying that any penalty a state incurs for noncompliance with registry requirements won't harm local law enforcement grants. The bill is waiting to be heard by the Senate Judiciary Committee.

The reasons for noncompliance vary from state to state. In Nebraska, legislators were philosophically opposed to the law's lifetime registry requirement for juveniles. Senator Amanda McGill, a member of the Nebraska Legislature's Judiciary Committee, says that the law as currently written could put people on the registry who don't really belong there.

“We may be putting resources in to people that don't need it,” says McGill, “and possibly ‘scarlet-lettering' them.”

Nebraska changed its sex offender registry in 2010 to attempt compliance with the Adam Walsh Act, categorizing offenders by their convictions, not by an individualized risk assessment, as had been done in the past. But the state has not met all the federal requirements, and is not currently attempting to meet them.

Implementing the Adam Walsh Act is a heavy lift: legislatures must enact changes to the state criminal code and, depending on the state's policy before the federal law passed, place new groups of offenders onto the public registry. Nebraska's change forced many offenders who'd already served their sentences onto the registry or increased the length of time offenders would be publicly listed.

“I hadn't been in any kind of trouble since completing probation,” testified Daniel Konecky, a now-lifetime registered sex offender, at a hearing before the legislature's Judiciary Committee last fall. Konecky was accused of having consensual sex with a 15-year-old girl when he was 23, and pleaded no contest to second degree sexual assault of a minor with the assurance from his public defender that he would only face two or three years on probation and would not be subject to the public registry.

“I feel like I'm being punished again for the rest of my life," he said, "after serving my punishment and proving my worth by living righteously, being a good father and husband, and staying out of trouble.”

Another reason states are hesitant to comply is the price. While noncompliance does come with a penalty, it's often dwarfed by the cost of adding more people to the public registry or staffing local law enforcement offices for the multiple check-ins per year that offenders must complete.

Texas estimated it would cost the state at least $38 million to implement Adam Walsh, while the penalty would be only $1.4 million. California's changes could exceed $30 million, and would result in “a less than robust sex offender registration process for the state,” says Tina Walker, chief of media relations for the California Emergency Management Agency. California still uses an individual risk assessment tool for all offenders to determine where they should appear on the registry, rather than relying on a particular conviction to determine placement, as the law requires.

“There are both policy considerations and cost considerations [that come with compliance],” says Baldwin at the Department of Justice, “and in these economic times, anything that entails a burden is something that's hotly debated.”

Arizona made its decision not to comply back in 2009, when a legislative committee found that compliance could cost more than $2 million. “Arizona's existing sex-offender laws are believed to be sufficient,” says Matthew Benson, director of communications for Arizona Governor Jan Brewer. “In fact, our state takes a more rehabilitative approach than SORNA when it comes to juvenile offenders.”

Arizona's attitude reflects opposition to Adam Walsh compliance that might best be described as old-fashioned federalism. “I hear some states say they feel confident that their state registries do an excellent job of protecting public safety,” says Elizabeth Pyke, director of government affairs at the National Criminal Justice Association. “They agree with the importance of sharing information across states but don't necessarily think all aspects of SORNA's approach to registration are better than what they already have in place. So if implementing SORNA will make them overturn long-held policies, some states may prefer sticking with their own registry systems.”

Even though only 16 states have met the Justice Department's requirements for substantial compliance with Adam Walsh, most of the rest are active in monitoring sex offenders. All but six states are part of the SORNA Exchange Portal, a tool developed by the Department of Justice to help states share information about offenders who move from one state to another. The receiving state can access information about an offender, and alert the offender's home state if he or she does or doesn't arrive.

Participation in the portal achieves one of the goals of the Adam Walsh Act — creating a national information-sharing network. But it doesn't get all the way there. Without full state compliance, the type of offender who shows up on any given level of the registry may still vary between one state and another.

On Capitol Hill, states' concerns about the Adam Walsh Act are starting to be heard. U.S. Representatives Bobby Scott of Virginia and John Conyers of Michigan both referred to the act as an “unfunded mandate” to the states during testimony on its reauthorization earlier this year. In addition to modifying the penalty provisions, the reauthorization bill no longer requires that juveniles convicted of sex offenses publicly register for life, and allocates nearly $3 million in state funding for sex offender treatment for juveniles.

The House bill has been referred to the Senate Judiciary Committee, but won't be considered there until at least mid-November, when the Senate returns following the elections.