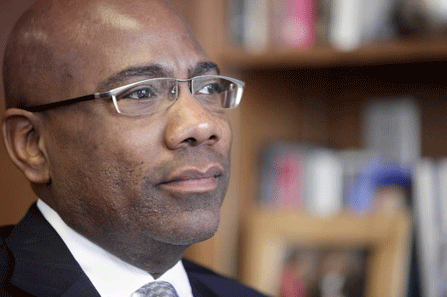 When David Wilson was first contacted in 2009 about becoming president of Morgan State University in Baltimore, he wasn't interested

But after being talked into a campus visit, Wilson was struck by the students he met there.

“I saw my own story with them,” says Wilson, a graduate of Alabama's Tuskegee University, a historically black university in Alabama. “They really saw being there as their last opportunity to transform their lives and their families.”

Wilson was sold, and he became president of Morgan State in July, 2010. But the task he inherited wasn't easy.

This past summer, two private Historically Black Colleges and Universities, or HBCUs, Morris Brown College in Atlanta and Saint Paul's College in Lawrenceville, Virginia, faced possible extinction. Morris Brown filed for bankruptcy in August, while Saint Paul's was given a temporary reprieve at the end of August when it won an injunction to remain accredited.

HBCUs, established after the Civil War to educate newly-freed slaves who were denied entrance to most other colleges and universities, are at a crossroads. As majority-white institutions become increasingly diverse, the percentage of the nation's black college students who attend HBCUs has plummeted over the last several decades.

Meanwhile, HBCUs are becoming less black: Black students are now a minority at seven of the 105 institutions the federal government designates as HBCUs. That designation gives the colleges preferred access to some federal grants and loans, but many HBCUs are aiming to become more diverse in order to survive, and are focusing particularly on recruiting Hispanic students. Some HBCU leaders even have suggested that their schools should move away from defining themselves by their racial character.

For public HBCUs, which educate far more students than private ones, these changes come at a time of transformation for all public colleges and universities. Like other public schools, they have been shaken by budget cuts. But unlike majority-white schools, many argue they are still hampered by decades of discriminatory funding.

“There's no such thing as an HBCU flagship, not even close,” says John Wilson, executive director of the White House Initiative on Historically Black Colleges and Universities. “In the state systems, HBCUs have been treated like step-children.”

Historically, HBCUs in all sectors have struggled to build endowments comparable to their majority-white peers. The university David Wilson took over in 2010 has a $1.5 million endowment, second-lowest among all public colleges granting bachelor's degrees in Maryland. Nationally, the average endowment at public 4-year colleges, $122 million, was eight times higher than at HBCU public 4-year colleges, which averaged $14.1 million, according to data from the U.S. Department of Education.

That means that many public HBCUs have had a harder time adjusting to recession-driven state budget cuts than other public colleges and universities, says Ronald Mason, president of the Southern University System, in Louisiana.

“When these cuts hit, they hit us first and hardest because we don't have a cushion,” Mason says.

Southern University's three campuses, the only HBCU system in the country, have used furloughs in recent years to deal with a roughly 40 percent cut in funding from the state, Mason says. At the same time, the system is looking for ways to centralize some services and offices system-wide to create greater efficiency.

At Morgan State, Wilson has made targeting federal money a top priority. During his tenure, the university has won a $28.5 million contract from NASA and is part of a team of universities led by Penn State that won $129 million in federal dollars to develop improvements in energy efficiency.

There could also be more state money on the way.

Next month, the U.S. District Court in Maryland will hear final oral arguments in a lawsuit filed by alumni of Morgan State and Maryland's three other HBCUs against the Maryland Higher Education Commission. The HBCU group charges that the state hasn't adequately supported HBCUs and has duplicated HBCU programs at nearby majority-white colleges, in violation of a 2000 agreement the state reached with the U.S. Office of Civil Rights to settle years of segregation in the state's higher education system.

If successful, the suit could bring as much as $2 billion in increased aid for the four universities and lead to the dismantling of programs considered duplicative, notably a joint-business program at Towson University and the University of Baltimore that the HBCU group says unnecessarily duplicates a similar program at Morgan State.

Other states have been ordered to boost HBCU funding to address past disparities. The 2006 settlement in Knight vs. Alabama, a case that spanned two trials and three decades, ordered Alabama to pay millions to increase student aid and capital support for the state's two public HBCUs. In another case, Mississippi's three public HBCUs were awarded $503 million in 2004.

James Minor, director of Higher Education Programs at the Southern Education Foundation, says that even large sums can only go so far. It doesn't fully make up for decades of discriminatory policies. And settlement spending, particularly on new facilities, often raises future costs after the settlement money runs out.

HBCUs need to do a better job telling their story, says Marybeth Gasman, a professor at the University of Pennsylvania's Graduate School of Education who specializes in HBCUs, to win more outside funding. They also need to do a better job fundraising, she says. The average HBCU alumni contribution rate is 8 percent, compared to the national average of 13 percent, according to the White House Initiative on HBCUs..

Gasman has co-written articles on the subject with Nelson Bowman, executive director of development at Prairie View A&M in Texas, which has used federal money to build a call center for use in fundraising. He says HBCUs need to increase giving by alumni and students to convince the outside world they are a worthy investment. Bowman has started a fundraising campaign among current students, hoping that convincing students to give now will make them givers for life. So far, 56 percent of the current freshman class has pledged support.

“Applying some of these concepts across the board will help all HBCUs,” he says. “The approaches that I'm using, they're not rocket science.”

But more than ever, Minor says, HBCUs need to make a better case for why they're a better option than their peers, HBCU or not. Only 3 HBCUs have six-year graduation rates above the national average of 58 percent, but Penn's Gasman says that HBCUs do a particularly good job preparing black students for careers in the sciences and medicine, which is backed up by findings from the National Science Foundation and the American Association of Medical Colleges. They're also particularly effective helping students who enter with severe educational deficits, she says, because they foster cooperation, rather than competition, and teach material from a culturally-relevant perspective.

The Southern University system has begun offering the two-year program of its Shreveport campus on its four-year campuses in Baton Rouge and New Orleans, to give those students a taste of campus life and hopefully smooth their path to a four-year degree. They're also working to offer more courses online, to reach a wider population of students.

Christopher Brown, the president of Alcorn State University in Mississippi, made headlines recently when he suggested to ESPN that he'd like to move his university away from being thought of as an HBCU.

At Alcorn State, that approach hasn't produced a radically different student body—at least not yet. More than 90 percent of Alcorn State's students are black, which is relatively unchanged from 10 years ago. But Morgan State's Wilson says it's essential for HBCUs to attract more non-black students to thrive in the future.

“We need leaders who are extremely entrepreneurial, he says, “who understand that the institutions may very well have a history that's rooted in African-Americans not getting access to predominantly white institutions, but that they cannot use that history as an anchor to hold the institutions back.”