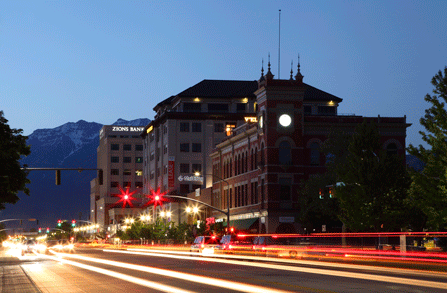 Provo has helped drive Utah's recovery with low unemployment, jobs and the economic benefits of being home to Brigham Young University. (iStockphoto)

PROVO, Utah — The first sign that Provo got through the Great Recession better than most places shows up quickly, when a driver heading south from Salt Lake City comes upon an army of workers and machines widening the main interstate highway exit into town.

The frenetic pace continues upon entering downtown. A tower crane soars above the expansion of the world headquarters of NuSkin, makers of anti-aging products. Nearby, workers are rebuilding a 114-year-old Mormon tabernacle destroyed by fire nearly two years ago. The four-month-old convention center is preparing to host the Siberian Husky Club of America annual show.

“Provo has not sat around and felt sorry for ourselves,” says Mayor John Curtis, ticking off the $500 million in construction projects underway around the city. “We're moving forward.”

The sluggish recovery is loaded with gloom and doom stories but this is not one of them. Instead, it is about a slice of the country that has outperformed other regions, lifting its state economy at the same time. Provo and nearby Orem have been under 6 percent unemployment this year, the lowest rate in a state consistently under the national average. Construction and high-tech startups are driving Utah's recovery with Provo a leader in both. Business representatives praise Utah's dynamic, well-educated workforce; Provo's median age of 23 is one of the youngest in the nation, and its education levels exceed national averages.

Name a “best places” list and chances are Provo and Utah are on it. Forbes chose Provo in June as its best place for business and careers. The Wall St. Journal's MarketWatch in August called Utah the country's “brightest star,” citing a study of 32 indicators by economic development consultant Pollina showing Utah as the top pro-business state. How many states can say they have their own toilet paper plant? Procter & Gamble opened a Charmin factory last year north of Salt Lake City, P&G's first new U.S. plant in 40 years.

The word is out. Provo, population 115,000, grew by three times the national average last year and is adding jobs faster than nearly every other metro area. “I found a job within two days,” says Chris Narramore, 24, a used car salesman who moved to Provo in January because of the slow economy in Oregon. Truck driver Eduardo Estrada, 28, uprooted his family of seven, including two pairs of twin children, from bankrupt Stockton, California in August because he heard from relatives that Provo was a better place to live and work. “I want to raise my family here,” he says. “It would be nice if I can find a good job.”

What gives Provo — and Utah — an edge over most places is a tradition of shrewd financial management, which includes holding down spending and borrowing, keeping taxes and wages low and maintaining budget reserves for emergencies.

Officials are proactive and creative in confronting financial adversity. To close a $3 million gap, Curtis cut 8 percent of the city budget when he took office in 2010, but left it up to Provo's employees to decide which services would be reduced and who would lose their jobs.

On the state level, Utah was one of the first states to replace its fixed-benefit public pension system with a hybrid arrangement combining features of a 401(k) and a defined-benefit plan. It also pioneered a mechanism to ensure the state would have adequate budget reserves even when revenues drop precipitously as they did during the recession. Lawmakers abhor plugging gaps with one-time revenue or borrowed money as other states have done. The credit rating agencies take notice. All three give Utah's general obligation bonds their top rating, one of only seven states so designated.

“I don't think there's any great secret to what we've done,” says Governor Gary Herbert, a Republican up for re-election Nov. 6. In an interview, and at a recent Bloomberg municipal finance conference, Herbert says cutting taxes on individuals from a high of 7 percent to an across-the-board 5 percent rate, trimming the sales tax rate, reducing corporate taxes and eliminating cumbersome business regulations have been central to Utah's ability to recover from the recession faster than many other states. He traces the conservative fiscal practices to Utah's pioneer Mormon thrift: “Make do, don't spend needlessly,” Herbert says.

A tour of Provo with economic development director Dixon Holmes shows how the Mormon influence contributes to the area's strength. An early stop is the gutted tabernacle, a community icon used for big events such as high school graduations. The day after it burned, residents spontaneously gathered there, many in tears. Church leaders were so moved that they chose not only to rebuild it as a temple, but buy adjacent property to expand its use. That decision boosted morale and accelerated the redevelopment of the center city — “downtown on steroids,” Curtis called it.

Holmes swings by Brigham Young University, splendidly framed against the foothills of the Wasatch mountain range. Cities anchored by major universities — BYU's enrollment is about 34,000, the largest religious institution in the country — often withstand downturns better than those without schools. It helps that the church, not the state, finances and operates BYU. (Fast-growing Utah Valley University, a state-supported school in Orem, also benefits Provo).

Demand for additional classrooms, student housing and retail businesses supporting the BYU campus are fairly constant. Holmes points out the construction of a five-level life sciences building on the south end of the grounds. A few blocks away is a newly opened five-level apartment complex housing 900 students. BYU adds to Provo by hosting cultural events, lectures and NCAA Division 1 sports. It also adds a bit of diversity to an otherwise homogenous area. Students from all over the world come here, and the school prepares its students for global missions by teaching 67 languages.

Unusual for a college town is the relative lack of a bar scene or rowdy weekend parties and game tailgating, which helps keep the crime rate one of the lowest in the country. BYU's honor code forbids drinking alcohol and caffeinated beverages, smoking and pre-marital sex. Curtis says the “Mormon DNA” also includes a strong work ethic and a drive to be successful that reveals itself in many of Provo's entrepreneurs.

Holmes drives over to the Provo river bottoms area where some of these high tech entrepreneurs have set up shop. One is Qualtrics, a company survey firm founded by a BYU marketing professor.  Another is Malawi's Pizza, whose founding partners are BYU grads who donate a portion of every order to orphans in Malawi, Africa. Motivational speaker and entrepreneur Stephen Covey also was a BYU graduate, professor and Provo resident who built the city's downtown arts center and named it after his wife. BYU does not have a monopoly on the state's tech startups. The University of Utah, about 45 miles away, has led the nation for two years in starting research-based companies.

“The environment is ripe for entrepreneurs,” says Curtis, noting that the arrival of software giants Novell and WordPerfect in the early 1990s probably launched Provo's high tech boom.  “There's a bootstraps-off-the-ground mentality. You take that and add low wages, minimal government interference and reasonable business costs and it has flourished.”

The environment is also ripe for large families, a signature of Mormon culture. The last two points of interest on Dixon's tour are Provo's sprawling health care complex and its new recreation center under construction. Provo's hospital is one of the national leaders in the number of babies born in a state with the highest fertility rate. Full-time mayor Curtis, 52, has six children “and I'm not unusual.” No wonder Provo cherishes its parks, trails, ballfields, pools and recreation center, which residents recently agreed to borrow $39 million to complete.

The rapid growth is Provo's — and Utah's — challenge, say Curtis and Herbert. Schools, roads, houses and canals to carry water will have to be built, they say, while keeping taxes low. There are other difficulties that temper the rosy outlook. Curtis was reminded of that a few weeks ago when Frontier Airlines announced it would halt its two daily flights between Provo and Denver, a potential blow to the city's effort to parlay its municipal airport into an economic development tool.

Not everyone is sharing in Provo's and Utah's prosperity. Many young people dropped out of the workforce during the recession to move in with their parents and return to school. Aging Baby Boomers also have been frustrated finding a job.

Mark Hansen, 53, was a recession casualty, losing his job as a finance officer at a real estate firm walloped by the housing downturn. Until he can find a full-time job, Hansen says, he is earning $10 an hour at a part-time job at a grocery store to help support his family of four. “I go online and look at lots of jobs but when I send out resumes, I never hear back,” he says as he heads into the local unemployment office.

Joyce Glenn, 55, has not worked full-time since she lost her $13-an-hour job as a grocery store cashier in 2010 when the store cut costs after a merger. “I'm very qualified,” she says. “I have applied for about 400 jobs in Utah County (which includes Provo) but I don't even get an interview. With BYU and Utah Valley University students here, cashier's jobs are a dime a dozen. And they can pay students $8 an hour.”

Curtis says there is no question the effects from the recession linger in Provo and that more work remains to continue bouncing back. “That's when the pioneer mentality kicks in and we say, ‘OK, we get it. We'll start over. We'll roll up our sleeves and figure it out.'”

Freelance researcher Mark Toner in Washington contributed to this report.