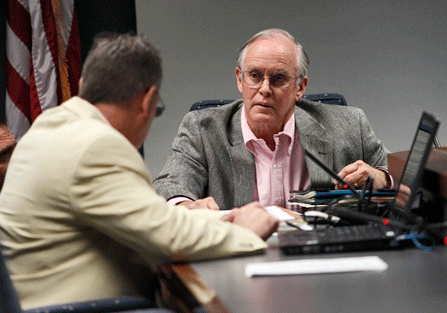 The Republican majorities in the Indiana, Kansas, Oklahoma and Wisconsin legislatures that reshaped state policy over the last two years were following the lead of their GOP counterparts in Arizona, who embarked on a similar path two years earlier.

The extent to which conservatives in Arizona will be able to continue that leadership role depends on what happens November 6, when they face a three-pronged threat: New legislative district maps are expected to help Democrats pick up seats; Arizona is voting on a ballot initiative to install a top-two primary system intended to help elect more moderates; and even if conservatives remain in charge, another ballot initiative could force the legislature to spend more on education than it otherwise would.

The result could be an Arizona legislature with fewer conservatives who have less power to enact a budget that reflects conservative priorities. Even if they manage to beat back the challenges, there are signs that Arizona conservatives are starting to adapt to a future in which their dominance isn't a foregone conclusion.

Part of Arizona Republicans' problem—if you can call it that—is that they have nowhere to go but down.

Democrats did well in most places in 2008, but not Arizona. With favorite son John McCain leading the Republican national ticket, the party picked up seats in both the Arizona House and Senate. Soon after the election, Republican Jan Brewer replaced Democrat Janet Napolitano as governor, after Napolitano left for the Obama administration. In the Republican landslide two years later, the party expanded its edge even further, winning two-to-one majorities in both houses, even though there are only slightly more Republican voters than Democratic ones in the state.

Yet there's more going on this year in Arizona than regression to the mean. In Arizona, a commission that includes two Democrats, two Republicans and one independent handles the once-a-decade process of redrawing legislative districts. Last year, Republicans in the legislature sparred repeatedly with the commission and its independent chair, Colleen Mathis. The legislature even removed Mathis from office—arguing that the commission had broken open meetings laws and drawn districts that violated state constitutional rules—only to have her reinstated by the Arizona Supreme Court. Ultimately, the legislature couldn't block the commission's maps.

Now, as the election comes into focus, it's clear that Republicans had reason to be worried. House Speaker Andy Tobin said in August that he expects a majority of 34 to 38 seats, down from the party's 40-20 edge today. Republicans currently hold the Senate 21-9, but Senate President Steve Pierce says the commission drew 13 Senate districts with clear Democratic registration pluralities. Still, both Republicans and Democrats expect the GOP to return with majorities in January.

While the new district lines will change who is elected to the legislature this year, the "top-two" initiative, Proposition 121, could lead to bigger changes in years to come. Under the system every candidate runs on a single primary ballot and then the top two vote getters, regardless of party, advance to the general election. Louisiana has long used a variant of this system, while Washington and California adopted it more recently.

One reason Arizona moved so strongly to the right once Brewer took over is that key moderate Republicans legislators lost in low-turnout primaries in 2008 to conservative challengers. “As it stands now,” says Joe Yuhas, a consultant for the campaign supporting the initiative, “the partisan primaries really limit that debate to those issues that are of interest of the most dedicated partisan voters.”

The goal of “top-two” is to make such results less likely. Though independents already are allowed to vote in partisan primaries in Arizona, the thinking is that they will be more likely to turn out when the primary is a bigger event and when they can mix and match between voting for Republicans and Democrats for different offices (currently, they have to pick one party's primary ballot). If more independents vote, the theory goes, more moderate candidates will advance to the general election.

Opponents of “top-two” argue that it can lead to unintended consequences. For example, if more Democrats than Republicans run for a particular seat, it's possible for two Republicans to advance to the general election because the Democratic vote is split. That's exactly what happened in California's 31st congressional district this year, where two Republicans will face off in a district where President Obama took 57 percent of the vote in 2008. Furthermore, since more candidates will have to win two competitive elections to take office, campaign cash will be at even more of a premium.

Conservatives aren't the only ones who are opposed to “top-two.” Some prominent Hispanic Democrats are too. “If you look at minority communities,” says State Sen. Steve Gallardo, a Democrat, “they're just not going to have the amount of money to be competitive with other communities.”

Nonetheless, both sides are treating the vote as, at least in part, a referendum on whether voters want a more centrist legislature. “I don't see the virtue in moderation,” says Maricopa County Attorney Bill Montgomery, a Republican who's leading the opposition to “top-two.” “That's the essence of our democracy to have those debates so that voters can have a choice.”

Then there's the education funding ballot initiative, which could hamstring conservatives even if they continue to dominate the legislature.

In June 2009, when the recession was ripping Arizona's budget apart, Brewer asked lawmakers to give voters the option to temporarily raise the sales tax by one cent per dollar. Many conservative lawmakers balked, but the legislature agreed eight months later. In June 2010, voters approved the tax increase with 64 percent of the vote.

The sales tax is scheduled to revert to its old level, 5.6 percent, on June 1, 2013. Brewer and other Republicans support that outcome, but education funding advocates favor Proposition 204, which would make the tax increase permanent and dedicate about 80 percent of the extra money to education.

Proposition 204 goes further: It would forbid state funding for both K-12 schools and universities from ever dropping below the level of either the 2012 or 2013 fiscal year, whichever is higher, and it would mandate that education funding increase to keep up with inflation and growth in the student population. Plus, it would forbid the legislature from changing the sales tax to reduce the amount of money it brings in. “This new sales tax will take away all budgeting flexibility from us,” says State Rep. John Kavanagh, the chairman of the House Appropriations Committee.

To supporters of the sales tax, that's the point. Ann-Eve Pedersen, president of the Arizona Education Network, notes that the Center on Budget and Policy Priorities, a Washington-based think tank, recently reported that Arizona cut inflation-adjusted per pupil education funding by nearly 22 percent between fiscal year 2008 and fiscal year 2013, more than any other state.

The 2010 sales tax increase was sold as a way to limit education cuts, but Pedersen argues that lawmakers redirected much of the money elsewhere. The budget Arizona lawmakers finalized this spring did restore some money for education, but not nearly as much as advocates would have liked. Conservatives in the legislature had other priorities, such as cutting capital gains taxes and restocking the state's rainy-day fund.

Under Proposition 204, per pupil funding is expected to increase by more than $600 in the first year alone. “There is really no wiggle room for the legislature,” Pedersen says.

Even before the November votes, there are some signs that the Arizona Republican Party's rightward march is slowing.

Russell Pearce, the former Senate president, chief patron of the anti-illegal immigration law and a conservative icon, lost his bid to return to the Senate in the August primary. Likewise, Republican State Senator Rich Crandall, a leading education expert in the legislature, turned back a more conservative challenger.

Those results were an indication that Steve Pierce is likely to return as Senate president (he replaced Russell Pearce last year), rather than be replaced by someone to his right. In most states, Pierce would not be considered a moderate: When he was elected to the Senate in 2008, his victory over a centrist Republican was a considered a major coup for conservatives. Yet Pierce is more interested in cutting taxes or business regulations than pursuing new legislation on hot-button issues like illegal immigration.

Meanwhile, some Republicans are seeking to broaden the party's policy agenda. Montgomery, an up-and-coming conservative and supporter of the anti-illegal immigration law, has pitched a new immigration bill that includes an expanded guest worker program. “There's a recognition,” he says, “that our immigration system ought to support and enhance our economic competition.”

Proposals like that may be a sign that Arizona conservatives expect their power to be challenged in coming years, especially as the number of Hispanic voters continues to grow. However, they are confident they will remain a potent force in Arizona politics for years to come “We may lose some seats in the legislature,” Pierce says, “but this is a Republican state and it isn't going to change.”