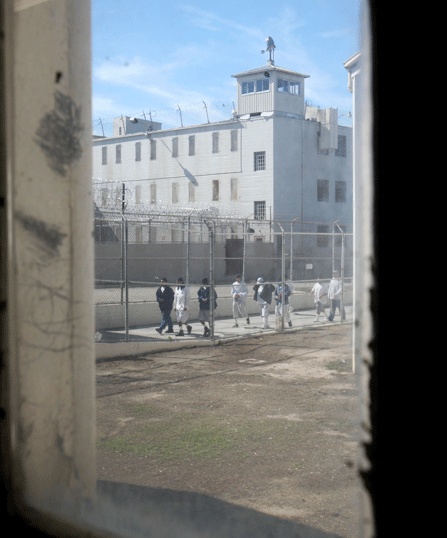 California's "three strikes" law is the nation's harshest in dealing with repeat offenders. Polling is strong for revision. (AP)

On June 29, 1992, 18-year-old Kimber Reynolds was leaving a Fresno restaurant with some friends when two men on a stolen motorcycle sped up and tried to snatch her purse. When Reynolds resisted, one of the men pulled a .357 Magnum out of his waistband, stuck it in the girl's ear and pulled the trigger. She died 26 hours later.

There were plenty of witnesses to the crime, and police quickly identified the shooter as Joseph Michael Davis, a hard-core methamphetamine user who had been jailed multiple times on drug and gun charges. Just two months before, Davis had been released from state prison after serving time for auto theft. Police converged on his apartment. When Davis came out shooting, they killed him.

In his grief over Kimber's death, her father Mike Reynolds both wrote and campaigned for California's “three-strikes” law, which voters approved in 1994 to protect the public from habitual offenders such as Joe Davis. Under the law, offenders who commit three felonies are automatically sentenced to 25-years-to-life in prison. The second and third felonies do not have to be violent or serious, as long as the first offense was.

But California voters appear poised to make significant changes in the three-strikes law. The problem, critics say, is that California's law has swept up many nonviolent offenders along with violent ones. They cite offenders who have been sentenced to 25-years-to-life for stealing videos or even, in one case, a slice of pepperoni pizza.

Proposition 36, which will appear on the California ballot this November, would require that a third-strike felony be serious or violent. The proposition also would allow the resentencing of third-strike inmates who got 25-years-to-life for minor felonies. The revision would bring California's law in line with three-strikes laws in 26 other states.

According to the California Secretary of State, the Peace Officers Research Association of California is the only group that has spent money ($100,000) to defeat Proposition 36. However, the California District Attorneys Association and several prominent advocates for crime victims have expressed opposition.

By putting fewer people in prison for long sentences, Proposition 36 could save the state up to $70 million annually, according to estimates by the state Legislative Analyst's office. Those savings are appealing at a time when California is staring down yet another year of budget crises. In a poll conducted earlier this month by the California Business Roundtable and Pepperdine University, 81 percent of respondents expressed support for Proposition 36.

But Reynolds and his supporters argue there is no reason to loosen a law that is working. They note that California's crime rate has dropped significantly since 1994, though it's not clear how much the law contributed to the decline. “To accept Proposition 36,” Sacramento County Sheriff Scott Jones said in a legislative committee hearing Wednesday, “is to accept that there will be new crimes and new crime victims.”

While Kimber Reynolds' death inspired the drafting of the three-strikes law, it was another young girl's murder that spurred the state to action. On October 1, 1993, 12-year-old Polly Klaas of Petaluma was abducted from a sleepover and murdered by a repeat offender, Richard Allen Davis. In the furor following the Klaas murder, politicians seized on Reynolds' legislation to quell public outrage.

Less than six months after the Klaas murder, the legislature approved the three-strikes law and Republican Governor Pete Wilson signed it. In November 1994, voters approved the same law in a ballot initiative, further locking it into place. California lawmakers cannot amend a law approved through ballot initiative without a two-thirds majority, and those who support changes have not been able to garner it. An earlier attempt to loosen the law through a ballot measure was defeated in 2004.

Michael Romano, who directs a Stanford University project that represents three-strikes offenders in their sentencing appeals, says California's version of the law has strayed from its original purpose. “If you go back to the original arguments used to pass the law,” says Romano, “they said ‘we want to see rapists and murderers and molesters behind bars.' It turns out that the majority of three strikers have been sentenced for nonviolent crimes.”

According to the prison population report published by the California Department of Corrections and Rehabilitation this past June, more third-strike inmates were incarcerated for property, drug and other non-violent crimes (4,702) than for violent “crimes against persons” (4,171).

Proposition 36 attempts to “return [three strikes] to its original intent,” says Romano, by requiring that the third strike that sends an offender to prison for 25-years-to-life be a violent or serious crime, such as rape or assault with a deadly weapon. It also allows current inmates who “struck out” on a lesser crime to apply for resentencing. As part of the process, they would undergo a risk assessment to determine whether they still pose a danger to public safety. The Legislative Analyst's office estimates that about 2,800 inmates would be eligible to apply for resentencing.

One important exception to the new resentencing rule, says Romano, is that an offender with a history of violent offenses will not be resentenced, even if his third strike was nonviolent. “Our initiative does not give the benefit of the doubt to those people,” Romano says, “even if their third strike was very minor.”

The changes in Proposition 36 correspond closely with of the views of Los Angeles County District Attorney Steve Cooley, who supports three strikes in principle but has made it a policy in his office to pursue a third-strike conviction only for violent offenders. "The state should not allow the misallocation of limited penal resources by having life prison sentences for those who do not pose a serious criminal threat to society,” said Cooley in a statement. “The punishment should fit the crime."

Along with reserving the harshest sentences for the most serious and violent criminals, proponents argue that the three strikes revision could help California reduce prison overcrowding and meet the limits set by the U.S. Supreme Court to reduce the prison population to 137.5 percent of capacity. At the last count on June 27, 2012, the state's prisons were operating at 155 percent of design capacity. The Legislative Analyst's office has said Proposition 36 could help reduce overcrowding, but it's not clear exactly how much.

‘Three strikes' across the country

California is not the only state considering a habitual offender law this year. In August, Massachusetts Governor Deval Patrick signed a three-strikes law under which offenders who are convicted of three violent and serious crimes must serve the maximum sentence for the third crime, with no possibility of parole. In most cases, the maximum sentence for such serious crimes is a life sentence.

Patrick was reluctant to sign the bill, given California's experience. But the Massachusetts legislature and public clamored for it after a repeat violent offender shot and killed a police officer in 2010. Patrick signed the bill but promised to revisit mandatory sentencing policy in the coming year.

Michigan is also debating a habitual offender law, although its law would require four strikes instead of three. The Michigan House and Senate approved different versions of the measure this year, but both would impose mandatory sentences of 25-years-to-life for certain repeat violent offenders. Michigan Attorney General Bill Schuette is pushing for the measure, but critics say it would be prohibitively expensive.