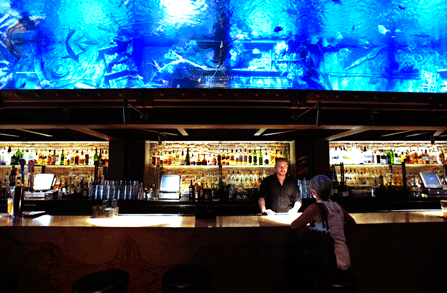 Public uproar over state funding to the Dive Bar (above) in Sacramento contributed to the downfall of California's redevelopment agencies. (AP)

Blame it on the mermaids. Only in California could the demise of a state program intended to help cities counter urban blight be linked to a dive bar in the state capital.

Actually that's what it's called, the Dive Bar, on K Street near the capitol building in Sacramento. Its 7,500-gallon aquarium often contains live “mermaids,” and it was one of many projects that benefited from a statewide redevelopment program that Governor Jerry Brown eliminated last year to help dig California out of its perennially huge deficit. It was publicity over the Dive Bar that helped make the whole program vulnerable.

The impact of dissolving 400 redevelopment agencies across the state is still being felt. Some cities are laying off city workers, others are delaying or canceling projects, some are mulling tax increases, and others have yet to figure out how they will make up the difference in lost revenue.

“It's been devastating,” says Chris McKenzie, executive director of the League of California Cities. He says most cities “haven't gotten their head above water in order to begin looking at how to do things differently. It's been a real body blow.”

Nationwide, cities are facing their sixth straight year of declining revenues, according to a new report from the National League of Cities that cited the loss of state and federal aid among reasons cities have problems coping. Cities in California, hit hard by the collapse of the housing market, are under particular stress. Stockton, Mammoth Lakes and San Bernardino have all taken the unusual step of filing for bankruptcy because they couldn't pay their bills.

Even though Brown used the redevelopment program when he was mayor of Oakland to restore the historic Fox Theater, he saw the program differently when he became governor. Soon after he took office in 2011, he called the program a “piggybank” full of money that should instead be spent on core government functions such as education.

California's program, while it existed, was unlike anything in most other states. It essentially allowed a city's redevelopment agency to keep most of the new property taxes generated from a “project area” and use them for its own projects rather than giving it to schools and other services that property taxes typically finance.

As Stateline reported last year, the redevelopment agencies collected about $5 billion annually that would otherwise have gone to local government services, but passed along only $1.1 billion to pay for such things as police, fire fighters, road maintenance, parks and libraries. Meanwhile, the diversions meant the state had to pay local schools $1.8 billion to meet minimum funding commitments.

Over the years, redevelopment agencies ate up a growing share of property taxes across the state — as much as 12 percent in recent years, compared to 2 percent when the program started more than 60 years ago, according to the state's watchdog organization, the Legislative Analyst's Office.

Opponents of the governor's decision to kill the program point to a study showing that California redevelopment agencies generated about 300,000 jobs each year, mostly in construction, and about $2 billion in state and local tax revenue.  In the Los Angeles area, the program is credited for an array of high-visibility projects, including the upgrading of Hollywood Boulevard and Chinatown.

But state officials and others say there really isn't a good way to measure how many jobs the redevelopment program created because city redevelopment agencies often did not track them. Opponents also say the program grew too big and lacked oversight. “The lack of accountability and transparency is a breeding ground for waste, abuse, and impropriety,” according to a 2011 report from the state controller that found Palm Desert's redevelopment dollars were used to renovate greens and bunkers at a 4.5 star golf resort.

Just last week, the state controller questioned nearly $50 million of redevelopment funds spent in the city of Hercules, including $3 million that the former city manager steered toward a consulting company that his family ran.

For their part, owners of the mermaid bar in Sacramento last year took out a half-page ad in the Sacramento Bee to rebut charges that it collected nearly $7 million in redevelopment subsidies. Instead, the owners claim, the bar received $3 million from the program and invested another $2.8 million of private money.

Pulling the plug on the redevelopment program has hit some cities harder than others. Oakland, for example, lost $28 million and had to lay off more than 100 city workers. Rancho Cucamonga, in San Bernardino County, has had to delay a major transportation project because of the loss of its redevelopment funds.

Cities that want to continue with redevelopment plans on their own can do so but have to figure out a way to make up the lost funding. “We expect that given tight revenues, many cities may cancel or delay redevelopment projects, with only the most essential going forward using other resources,” said a recent report from Standard & Poor's Ratings Services.

A handful of cities are considering tax increases and blame the loss of redevelopment funds as part of the reason why. Voters in at least six cities in California will consider ballot measures this November that would increase sales taxes, Bloomberg recently reported.

Other cities are going forward with their projects and hoping the state doesn't interfere. “They can dissolve it. As long as they let us complete the two projects on the table … we'll take our lumps and be done,” says Mark Evanoff, a redevelopment manager at Union City, located in the San Francisco Bay Area.

The city is honoring the contracts it already signed for the second phase of a major project to make its Bay Area Rapid Transit (BART) station connect better with other bus and rail projects and to develop the area surrounding the BART station with new roads, bus lanes and bike lanes. The intermodal BART station project included cleaning up contaminated land several years ago so that more than 300 townhouses and single-family homes could be built.

“Land that had a negative value started generating $2 million in property taxes a year,” Evanoff says. While the city received $74 million in redevelopment funds for the project, it got $83 million in grants from other sources and $300 million from private investors.

McKenzie of the League of California Cities says that one of the most important things the redevelopment program had done over the last 50 years was clean up and develop environmentally contaminated properties. “That has been largely unknown,” he says.

But it may be premature to write off state redevelopment altogether. The legislature passed four measures aimed at narrowing the kinds of projects that make up “redevelopment” and allowing cities and counties to take some property taxes for these projects as long as they don't divert money from schools. The governor has not indicated whether he will sign any of them.