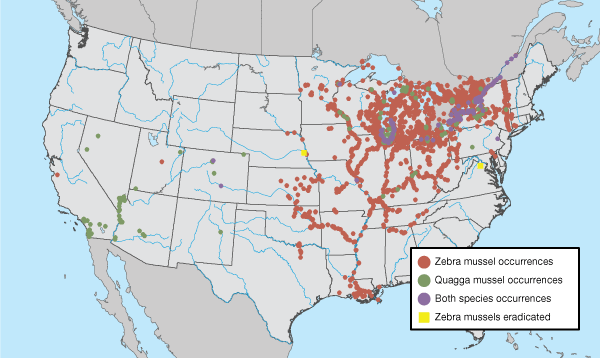 Bob Wakeman knows the invaders well. He's seen what they have done to ecosystems throughout the Great Lakes, choking out billions of dollars worth of aquatic life. He's caught a few putrid whiffs of their rotting carcasses piling up on Wisconsin's shores. Even in death they cause trouble with their sharp shells. If you step on them, they'll cut your feet.

“They pretty much get us in every direction,” says Wakeman, the aquatic invasive species coordinator for Wisconsin's Department of Natural Resources.

Meet the mussels: Zebra and its close cousin Quagga. The adult zebra is fingernail-sized with a brown and white striped shell. Quagga is slightly larger, rounder and lighter in color.

As young larvae, they move freely. In their adult days, they settle down and latch on to surfaces with a suction so tight they sometimes need to be jackhammered off. Hundreds of trillions of them, if not a quadrillion, blanket Lake Michigan alone.

The mussels consume nearly everything in their path, including hazardous chemicals and minerals, which they deposit as highly toxic sediments on lake floors. Included in their diet is plankton, a food source that fish depend upon for survival. As plankton populations have dwindled in the lakes, toxic algae blooms have risen, causing further environmental damage.

When the mussels aren't destroying the underwater food chain, they can clog the pipes and machinery of power plants and water delivery systems; in rare cases over the years, they've even forced shutdowns. As recently as 2007, a nuclear plant along Lake Ontario in upstate New York faced three shutdowns in two months, its water intake system clogged with algae blooms caused by the mussel spread. The stoppage cost up to $2 million in lost revenue per day.

Efforts to eradicate the mussels with chemical treatment have worked only on small, confined bodies of water, and only in rare cases. Once they get into larger, open bodies of water, eliminating the mussels is considered nearly impossible, though researchers are still looking for solutions.

Now it's the west's turn to fight the invasion. The past six years have seen an uptick in mussel sightings in the mountain states, and if the creatures continue to spread out, state regulators fear the impact on infrastructure could eventually be even worse than in the Great Lakes. ‘‘If those mussels get a foothold on the Columbia River Basin, they could wreak havoc on hydroelectric power,” says John Harrison, a spokesman for the Northwest Power and Conservation Council. “There's no question that the cost of power would go up.”

In all, Great Lakes water users spend about $30 million per year to deal with the zebra alone, according to the Aquatic Nuisance Species Task Force, a coalition of federal environmental and resource agencies. The states have chipped in additional money to contain the spread. State officials have trained volunteers to spot the invaders and educated boaters about why they should clean their vessels.

In Wisconsin the education seems to have worked. Surveys of Wisconsin boaters show that 94 percent are aware of the mussels and how to mitigate their spread, says Wakeman. But just how many boaters follow the guidelines is a question that's hard to answer.

Mussels don't just spread in water. They also cling to anything that's been in the water, including boats, and travel on land as stowaways before finding a new body of water to populate. Under cool, humid conditions, mussels can survive for weeks out of water, says Sam Chan, an invasive species expert at Oregon State University. When the weather is hot and dry, the mussels still survive for several days.

That's likely how they crossed the Rocky Mountain divide, clinging to the boat of a vacationer traveling from the east. In 2007, researchers discovered a mussel infestation on Nevada's Lake Mead, formed by the the Hoover Dam, a key source of water, energy and recreation for states along the Colorado River. The mussels' arrival has already added costs to operating the Hoover Dam and the Davis dam 70 miles downstream.

In Southern California, the invasion has dealt a blow to water delivery systems. Since 2007, the Metropolitan Water District of Southern California has spent more than $30 million to address mussel infestation. That includes about $10 million to repair initial damage, and more than $4 million each year to power-wash steel rods, treat water with chlorine and pry mussels from submerged equipment. Ultimately, ratepayers absorb the costs.

And if the mussel advances into other water systems, such as the Central Valley, the damage could spread to farmers' irrigation equipment,  says Ric De Leon, who manages the microbiology unit for the Southern California District.

“The key is to maintain diligence and provide more support so that other systems don't get infested like ours,” he says.

Through piecemeal laws, added inspection stations and outreach efforts, western states are trying to do just that. The California Legislature recently passed a bill that would increase boater registration fees to help fund mussel prevention efforts, something a number of states have done.

But it can be an uphill battle.

At a time of belt-tightening across all levels of government, increasing fees to address a tiny mollusk is sometimes a tough sell. That was the case in Nebraska. Last year, that state enacted a law making it illegal to possess or transport invasive species. But efforts to generate revenue through boat licensing fees fell flat.

Political will can be difficult to find in some states because fighting mussels “is a long term investment and an uncertain one,” says Edwin Grosholz, a water expert at the University of California, Davis.

Even in states that mandate boating inspections, boaters escape scrutiny when they arrive during inspection stations' off hours. What's more, federal privacy laws prohibit regulators from shouting across state lines if they know a boat headed elsewhere is infested.

“It has to be coordinated both regionally and nationally,” says Craig Martin, head of the invasive species staff at the U.S. Fish and Wildlife Service.

In late August, officials from the federal government and 19 western and midwestern states gathered in Phoenix to consider creating uniform standards for inspections, instead of relying on the patchwork of regulations in practice throughout the states. They group, which included 15 state attorneys general, emerged with a 19-point action plan to address the problem.

Meanwhile, groups such as the Northwest Power and Conservation Council are asking the federal government for financial help in the mussel war, hoping reinforcements will arrive before it's too late. “We recognize that state budgets are tight, and there is federal money available,” says Harrison. “This is sort of a preemptive strike.”