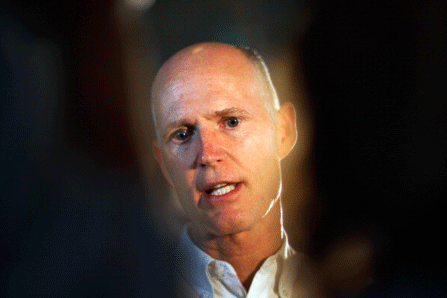 There was nothing wrong or unusual about the board of directors of the Bert Fish Medical Center in Daytona Beach, Florida, pursuing the take-over of their public hospital by Adventist Health System. Their misdeed was pursuing a sale to Adventist in utter secrecy.

The first time the planned merger bubbled up to public attention was when the Bert Fish board approved it in May 2010. By then, the board had conducted 21 closed-door meetings over 16 months. Those meetings violated Florida's open government law, a district judge later decided as he scuttled the $80 million deal. It didn't help that some directors would also have been direct beneficiaries of the sale of a public asset had the merger gone through.

The episode forced Bert Fish to remain—at least for the present—a public hospital. It also spurred legislation requiring a state review of the proposed sale of any public hospital and greater transparency in consideration of such deals in the future.

But the new law, approved by the Republican-controlled legislature and signed by GOP Governor Rick Scott last April, also includes a more far-reaching mandate: All of Florida's 29 public hospitals must now evaluate themselves to determine whether another type of ownership, most likely non-profit or private, would be cheaper or result in better medical care.

The Bert Fish scandal alone probably would not have prompted that provision had it not been accompanied by the ascension of Scott as governor. Scott is the former chairman of the behemoth Columbia/HCA hospital chain, and he has been outspoken in his belief that the private sector can run virtually any enterprise—from hospitals to schools to prisons—better than the government.

In effect, the law forces an existential question on all of Florida's public hospitals. The self-examination could lead to the transformation of some or all of them from tax-supported institutions into tax-exempt or even tax-paying facilities, perhaps generating savings or new revenue for the cash-strapped state.

Republican state Senator Don Gaetz, who sponsored the legislation, says he is doesn't care whether the hospitals remain public or become private. He says he sponsored the legislation for one reason only, “to ensure that if we have public hospitals sold or leased, there should be complete transparency in the process and no one ought to profit—except the owners of the hospital, which is the public.”

But many others are not neutral about the status of public, or government-owned, hospitals. Across the United States, they were created to ensure there were places where the indigent could receive care. Critics doubt that investor-owned hospitals would be as responsive to the needs of the poor as public hospitals are now—no matter what promises might be made at the time of the sale.

“I'd be very worried that private for-profit entities would have great incentive not to treat people who couldn't pay,” says Bruce Siegel, chief executive officer of the National Association of Public Hospitals and Health Systems. “It's not my opinion but a fact that investor-owned corporations' responsibilities are to their shareholders.

For his part, Gaetz insists the law provides for continued care of the indigent, even if a public hospital becomes private. What's certain, says Linda Quick, president of the South Florida Hospital and Healthcare Association, which represents more than 160 companies and professionals in health care, is that even if public hospitals went private, the poor would continue to show up on their doorsteps.

“All three types of hospitals (tax-paying, tax-exempt and tax-supported) provide uncompensated care,” says Quick. “How much they do depends not on their tax status but on their locations.”

“If Jackson Memorial Hospital, which has a large volume of Medicaid patients, were sold to an investor-owned chain,” Quick says, “does that mean that the people going for care there would start going somewhere else? No. They'd keep right on going to Jackson regardless of who owned it and its tax status because it's closest to where they live. Nothing is going to change that.”

The caveat is that if Jackson were to keep treating the uninsured as a private or non-profit entity, it would need public money to do so, just as it does now as a public hospital. Consequently, its hospital district might still impose a property tax surcharge on residents, as it does now, to pay for health care for the poor.

Early in his administration, Scott signaled his skepticism over public hospitals. In 2011, he appointed a commission to determine whether government-run hospitals were in the best interest of taxpayers. Would taking government out of the hospital business result in greater efficiency and better care?

But answering those questions proved difficult. The commission quickly realized that the idiosyncrasies of Florida's 29 public hospitals (located in 33 public hospital districts), made it nearly impossible to compare them with each other, let alone with private hospitals. Some had a single hospital. Others, such as Dade County's Jackson Health System, were immense organizations comprising not only multiple facilities, but medical schools, and expensive specialty services such as trauma and transplant centers. Some were rural, others urban.

The commission also found that the hospitals used their tax dollars differently. In Florida, public hospitals receive a total of about $5 billion a year from surcharges on local property taxes. Memorial Healthcare System in South Broward County spent its tax dollars on primary care, transportation and home-based services, all in an effort to keep people out of the hospital. By contrast, Broward Health in North Broward County used its tax dollars to defray the costs of indigent care provided in its hospitals.

Even the question of what constituted “charitable care”—the defining characteristic of public hospitals—varied greatly. Each hospital used different criteria for determining who was entitled to uncompensated care.

In the end, the commission could not answer the basic question Scott had put before it. “Using the available outcome data,” the task force concluded in the report it released late last year, “the Commission could not establish that there is a pattern of higher or lower quality of care in Florida hospitals based on ownership type.”

The Legislature Steps In

But that wasn't the end of the issue. If a commission couldn't determine the value of all of Florida's public hospitals, the Legislature decreed, then each of the public hospitals would have to provide an answer for itself.

Under the new hospital law, each of Florida's public hospitals will have to hire a consultant to determine its market value and to assess whether it could be more efficient and provide better care under a different form of ownership.

Each hospital (or hospital system) then has to recommend whether it should remain a public facility, put itself on the market or hand over its management to outsiders.

The law specifies that as part of the process, each hospital also has to conduct public hearings.

The Safety Net Hospital Alliance of Florida, which includes most of the state's public hospitals, did not oppose the new law, but argues it is not needed. Casey Reed, legislative affairs director of the alliance, says the Bert Fish scandal proved that the existing laws worked. Reed also notes that public hospital boards already were empowered to sell to private owners.

Satisfied with the Status Quo

Frank Nask, president of Broward Health, says most Floridians who use public hospitals seem satisfied with them. “I don't think there's been any push anywhere,” Nask says. As to the future of his own public system, he says, “I think we have the feeling that it works for us and the community.”

Although Florida public hospitals have until the end of the year to begin their self-exams, one of them, Memorial Healthcare in South Broward County, has already completed the entire process and reached a conclusion.

“We found that our hospitals performed quite well, especially given the uncompensated care burden [about $200 million a year],” said Matthew Muhart, chief financial officer of Memorial Healthcare. The hospital district has actually done so well financially in the last few years that it has reduced the amount it collects in local tax revenue from $60 million in 2009 to a projected $23 million in 2013.

Memorial says it also has provided $1.4 billion in charity care to the South Broward community over the past decade.

Reed of the Safety Net Hospital Alliance of Florida is among those who believe that the net result of the new law will be no changes at all in the ownership of the public hospitals of Florida. But it has not gone unnoticed that the boards of many public hospital districts are appointed by the Florida governor. The new law may not change anything, but Scott's appointments could.