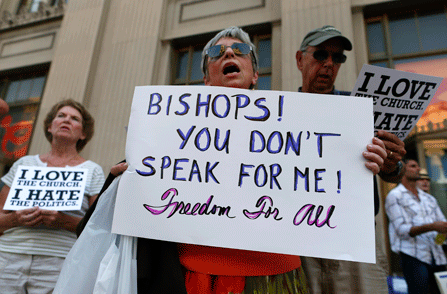 Protesters challenge the policies of Baltimore's Catholic Archdiocese at a rally in July. (AP)

Earlier this month, in nearly identical benedictions at the two national political conventions, Cardinal Timothy Dolan of New York talked about the importance of religious liberty. He called it “the first, most cherished freedom bequeathed upon us at our Founding.”

Few delegates in Tampa or Charlotte had any reason to challenge this language. The concept of “religious liberty” is enjoying a resurgence among both liberals and conservatives, and is referenced in both party platforms as something to be protected and respected.

What provokes argument is the question of just what religious liberty means. Lurking below the surface agreement is a complex and highly charged conflict about the role of religion in public life.

The conflict began last spring as a heated national debate about whether faith-based organizations should be required to cover birth control in their health plans. It is quickly spreading to a wide range of policy questions, many of which will likely be resolved at the state level.

One issue is whether governments and courts are trying to relegate believers of varying creeds to private expressions of faith within the walls of their places of worship. Nathan Diament, executive director of public policy for the Union of Orthodox Jewish Congregations of America, says the correct definition of religious liberty includes "the protection and the valuing of individuals not just to believe what they want to believe but to act and live their lives in conformity and consistent with those beliefs.” Critics of this understanding of religious liberty assert that faith should not be an excuse to be exempted from any public policy with which one disagrees.

The Ethics and Public Policy Center, a DC think tank, has formed an American Religious Freedom Program that is working to form bipartisan caucuses in all 50 state legislatures. One goal is to allow believers to opt out of providing professional services – such as photographing same-sex weddings or dispensing contraceptives at pharmacies – based on their personal religious convictions. Another is to make sure that any same-sex marriage legislation includes provisions stating that religious institutions are not legally required to allow the use of their property for same-sex weddings.

"Most Americans are familiar with debates about religion being worked out in the courts,” says Tim Schultz, the Program's state legislative policy director. “Our view is that the courts should not be the only recourse for the protection of religious freedom and that legislatures have a role to play—particularly in the states."

These debates are already in full force in some states. In May, Tennessee Governor Bill Haslam vetoed a religious liberty bill passed by the legislature that would have allowed student groups at Vanderbilt University to exclude from membership those whose religious beliefs were inconsistent with the group's values. Vanderbilt is a private university, but it receives significant state funding.

In his veto note, Haslam said that it was “counter-intuitive to make campus organizations open their membership and leadership positions to anyone and everyone, even when potential members philosophically disagree with the core values and beliefs of the organization.” Still, he said, “as someone who strongly believes in limited government, I think it is inappropriate for government to mandate the policies of a private institution.”

Missouri's measure passed overwhelmingly (82.8 percent) in August, but it has been controversial because of language not included on the actual ballot that says “no student shall be compelled to perform or participate in academic assignments or educational presentations that violate his or her religious beliefs.” Critics say that provision creates a loophole for students who simply wish to evade an unwanted assignment.

“Many of these measures are misleading and cast as a response to some mythical war on religion,” says Daniel Mach, director of the American Civil Liberties Union Program on Freedom of Religion and Belief. “Religious liberty was alive and well in Missouri before this amendment. There was simply no need to change the state constitution and now the state has opened the door to official religious favoritism and the nearly boundless rights of students to refuse assignments on religious grounds.”

In November, Florida will vote on a constitutional amendment that would prohibit discrimination against individuals and institutions on the basis of religious beliefs and remove a longstanding ban on public funding “in aid of any church, sect, or religious denomination or in aid of any sectarian institution.”

Supporters argue that the amendment is necessary to ensure that social service organizations with religious affiliations can compete on an equal footing with other organizations providing similar services. They point to an ongoing legal challenge to a faith-based prisoner re-entry program that they say serves an important purpose and is just one option among many for ex-convicts in need of support. “They are overt in their faith and that's why they're doing the prisoner re-entry," Schultz says, "but they're not saying, ‘if you want to go through our program, you have to go to Sunday School.' If they were, that would be a very, very different thing."

Opponents argue that the amendment is a misleading attempt to pave the legal groundwork for parochial school vouchers and is unnecessary because in practice faith-based organizations already receive government funding to provide public services. “This is just a starting point of a campaign to get more funding into private religious schools and religious social services,” says Barry Lynn, executive director of Americans United for Separation of Church and State.

All of these issues are familiar to Cardinal Dolan and the organization he leads, the United States Conference of Catholic Bishops. Many Catholics and religious conservatives were irked by the Obama administration's initial decision this spring requiring faith-based nonprofits whose teachings object to contraception to offer free birth control coverage to their employees. A compromise now requires insurance companies, rather than employers, to provide the coverage, but many religious liberty advocates still object to the requirement on the grounds that insurers will end up passing the costs along to employers anyway.

In response to the controversy, the Conference of Catholic Bishops released a detailed statement claiming that religious liberty is under attack and urging conscientious Catholics to disobey any “unjust laws.”

The list of grievances goes far beyond the contraception mandate. In Alabama, the state's immigration law forbids the “harboring” of undocumented immigrants. The Catholic Church complains that this forbids “what the Church deems Christian charity and pastoral care to those immigrants.”

Catholic Charities providing foster care and adoption services in Illinois, DC, Boston and San Francisco have been driven out of business through license revocations or government contract suspensions after they refused to place children with same-sex couples or unmarried opposite-sex couples who cohabitate.

All these issues are complicated by the increasing diversity of religious perspectives on issues such as contraception, abortion and gay marriage. Religious institutions are trying to work out the differences among themselves at the same time as they grapple with the way their positions match broader public policies. A group called Catholics for Choice held panels at the national political conventions to bring attention to alternative interpretations of religious liberty.

“We believe that religious liberty is about protecting each of us making our own decisions based on our own conscience and religious beliefs,” says Sara Hutchinson, domestic program director of Catholics for Choice. The bishops, she says, are trying to use the First Amendment as an excuse to codify their own theologies and ideologies. “It doesn't say ‘the free exercise of what the bishops tell you your religion is,'” she says.