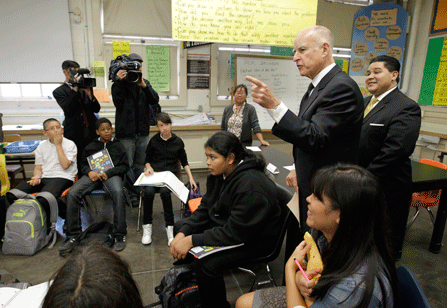 The last few years haven't been easy for students and teachers in California public schools. Beleaguered by budget woes, the state now spends $8 billion — or 21 percent — less on education than it did five years ago. Some districts have had to shrink or eliminate their art, music or sports programs. Others have had to lay off teachers or reduce the number of school days.

In November, voters will decide whether to approve a temporary sales tax increase and income tax hike on the state's highest earners to restore some of those cuts. The defeat of the measure would automatically cut $6 billion from the state's $91.3 billion budget. Ninety percent of that amount would come from K-12 education and community colleges.

“We simply have to take a stand against further budget cuts for schools or for our public safety,” Governor Jerry Brown says in an advertisement released this summer by the proposition campaign. “To do that, we're going to the people.”

California isn't the only state with an education-focused tax initiative on the ballot this November. Voters in Oregon and South Dakota will vote on tax initiatives that would increase education funding, while Arizona voters will decide whether to renew a two-year-old, one-cent sales tax increase that pays for education. But California's Proposition 30 is much bigger than the initiatives in Oregon, South Dakota and Arizona. And instead of funneling new money to education, California's measure would merely maintain the current level of spending.

California voters also will consider another education initiative this fall. Proposition 38, backed by the California PTA and funded primarily by civil rights lawyer Molly Munger, would raise taxes on nearly every income bracket starting next year to increase funding for schools. It's possible for a Californian to vote for both measures, but if both win approval only the one with the most votes will go into effect. Because the school year has already begun, districts have had to budget for the possibility that both measures will fail.

Michael Johnston, the assistant superintendent for business services at the Clovis Unified School District, near Fresno, says his school district plans to rely on budget reserves if the trigger cuts take effect. Other districts have shortened the school year and negotiated furlough days for teachers if the measure doesn't pass.

Johnston, also president of the California Association of School Business Officials, says even those measures might not be enough.

“Even though their budgets may look like they've planned for it,” he says, “some school districts will have to make some adjustments if it doesn't pass.”

“Its prospects are partly cloudy with a chance of rain,” Democratic pollster Ben Tulchin told reporters in August about Proposition 30.

Voters will be asked to approve more taxes at a time of deep distrust for California politicians. Less than one in five registered voters said in June that they approved of the job being done by the state legislature, according to The Field Poll, which regularly tracks California public opinion. That was before news of a pay raise for legislative staffers and hidden state parks funds emerged this summer.

Backers of both well-funded education initiatives have taken pains to distance themselves from Sacramento, creating separate funds they say politicians wouldn't be able to touch, and promising regular audits.

Kocivar says the PTA is neutral on Proposition 30, but that Proposition 38 would better serve schools by giving them more money and more control over how to spend it. “When you vote for Prop 38,” she says, “you know what the money's going to be used for.”

The budget passed this summer by the legislature and signed by Brown assumes passage of Proposition 30. Unlike Proposition 30, Proposition 38 would not prevent $5.4 billion in education spending cuts slated for the current school year. Brown's spokesman and the leaders of the Proposition 30 campaign say they don't have a contingency plan if their initiative loses to Proposition 38.

Proposition 30's opponents say Brown shouldn't have put voters in that position to begin with.

“It's a false choice to say that if you don't pass a tax hike, we have to cut the schools, like it's one or the other,” says Aaron McLear, a spokesman for No on 30 – Californians for Reforms and Jobs, Not Taxes.

McLear points to the authorization of $4.5 billion in bonds for a high-speed rail system this year as evidence that the legislature could have found cost-savings elsewhere to produce more money for education.

“They're making a choice to fund certain things like the bullet train,” he says, “and to hold students hostage.”

Voters approved the high-speed rail project in 2008. But as cost estimates have grown, public support has waned. The Field Poll in July found that 56 percent of likely voters would not vote for the measure today and that one-third of those voters said that approving the first round of funding for the train, which happened soon after the poll was released, would make them less likely to approve Proposition 30.

But supporters of Proposition 30 note that voters approved a bond issue to pay for the high-speed rail project, so it's misleading to weigh it against education spending, which comes out of the state's regular budget.

Mark Hedlund, a spokesman for Democratic Senate President Pro Tem Darrell Steinberg, says years of budget-cutting in Sacramento have left lawmakers with few options.  “There's no more fat out there,” he says. “We've made very significant and drastic cuts in a lot of areas.”

Johnston in Clovis says his district has been able to withstand those cuts so far without cutting too deeply. Reserves this year will plug what he estimates would be a $17 million hole if the trigger cuts take effect. But without more revenue, he's not sure how his district would be able to avoid major cuts next year.

“We could turn out the lights in all the schools,” he says, “and we still wouldn't have enough money to cover the cuts.”