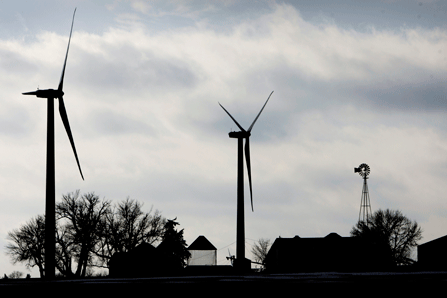 Wind power made up nearly one-third of the capacity added to the nation's energy grid in 2011. (AP)

Across the plains of Iowa, Colorado, Oklahoma, Kansas and South Dakota, tall turbines with sleek blades dot once-clear horizons, churning out carbon-free energy to add to the nation's power grid. The blades seem to wave a greeting, on windy days at least, to whoever drives across those open spaces.

The wind industry's rapid growth has been cause for excitement among both Republican and Democratic policymakers in the heartland states. They welcome the jobs that come with it. In South Dakota, which has the capacity to generate almost a quarter of its energy from the turbines, “wind is not a partisan issue,” says Hunter Roberts, the state's energy director.

But it is a controversial issue in Washington these days, threatening to stop the turbine boom before it progresses much further. Fiscal hawks in Congress — those who don't represent wind states — question whether Congress can still afford to dole out the generous tax credit that has helped fuel the industry's rise. Wind energy credits are just one of several renewable energy incentives set to expire at year's end.

Wind-state governors, most of them Republicans, have loudly called for the credit's renewal, writing letters to Congress and speaking through the media. But with the expiration deadline looming, the governors have grown curiously quiet on the issue. That's since Mitt Romney voiced his opposition to the subsidy, shortly before releasing an energy plan that is heavy on oil and natural gas investments and light on wind and other renewables.

The governors are hoping to avoid a clash with the Republican presidential nominee — one that could turn pro-wind Republican voters against him. “I do think they're tip-toeing,” says Chris Larimer, a state politics expert at the University of Northern Iowa. “You don't want to be the governor to lose your state for the party candidate.”

Wind power made up nearly one-third of the capacity added to the nation's energy grid in 2011, its growth second only to that of natural gas. Meanwhile, prices for wind energy have continued to fall, making wind increasingly competitive with other forms of power. In part, that's due to improved economies of scale and increased state investiment in renewable energy. But without federal help, wind still lacks the strength to compete with oil and gas, industries that have long enjoyed federal subsidies of their own. If Congress completely did away with the $12 billion wind tax credit passed during the Bush administration, it would deliver a quick blow to those who have a stake in the spinning turbines.

“Everyone knows it's going to come to a screeching halt,” says Roberts, who estimates that some 1,000 jobs in South Dakota could be affected, including 100 construction jobs that would be eliminated outright. “It's troubling to see,” he says. “The state has put a lot of time and investment in wind.”

As a whole, the industry could shed as many as 37,000 jobs by end of the first quarter of 2013, according to an estimate by the American Wind Energy Association. That includes 10,000 that could be lost by the end of this year. “There's carnage in the near term.” says Ryan Wiser, a staff scientist at Lawrence Berkeley National Laboratory.

Even if Congress extends the credit, which appears unlikely, energy experts still peg 2013 as a loss for the industry. Layoffs have already begun amid the uncertainty, with hundreds of manufacturing jobs cut in Iowa and Colorado.

Such grim predictions aren't news to wind-state governors. For the past year, they've peppered members of Congress and newspapers with letters in support of extending the renewable electricity production tax credit (PTC).

“The PTC plays an important role in helping to deploy technologies that ensure a diverse, domestic energy fleet,” wrote Mary Fallin, Oklahoma's Republican governor, in a February letter to congressional leaders. “The PTC should be evaluated in the future to determine its long-term viability,” she wrote, “however, the credit needs to be extended immediately to create certainty today.” Fallin is active in the 23-member Governors' Wind Energy Coalition, which has pushed for a four-year extension of the subsidy.

In Iowa, where the wind industry employs as many as 7,000 people and generates 20 percent of the state's power, Republican Governor Terry Branstad has gone as far as criticizing the editorial board of the Wall Street Journal, which has opposed the federal investment in renewable energy.

“Your recent editorials on the federal wind-energy Production Tax Credit (PTC) and renewable portfolio standard (RPS) are off the mark,” Branstad wrote in a letter to the editor in May. “The wind-power industry is an American success story that is helping us build our manufacturing base, create jobs, lower energy costs and strengthen our energy security.”

But Mitt Romney disagrees. In late July, he announced his opposition to continued wind subsidies. “He will allow the wind credit to expire, end the stimulus boondoggles, and create a level playing field on which all sources of energy can compete on their merits,” Shawn McCoy, a campaign spokesman, told the Des Moines Register.

Branstad voiced his concern the next day, but mildly, and only when prompted. “We agree with Governor Romney on most issues and believe there is an opportunity to further educate Governor Romney and his team on the benefits of a short-term wind energy tax credit extension,” he told the Register. “This would allow the industry to continue its growth while we prepare for the eventual elimination of the tax credit over a period of years.”

But Branstad has since been quiet on the issue, as have his fellow Republicans in the Wind Energy Coalition. Branstad's staff did not respond to several calls and emails over the course of three weeks.

Kansas Governor Sam Brownback, who in March glowingly endorsed the tax credit in the Wichita Eagle, turned down an interview request through Sherriene Jones-Sontag, a spokesperson. When asked for more information on his stance, she said only: “Rather than allowing the wind tax credit to expire at the end of the year, the governor supports phasing it out over the next four years.”

If the governors have intentionally steered clear of the topic, Tim Hagle, a political expert at the University of Iowa, says he's not surprised. “If you're in the same party, you're likely not to want to get in a big tiff,” he says. “You don't want to provide an opening for the other side to divide the vote.”

President Obama has tried his best to exploit any opportunities, particularly in highly competitive Iowa, where a recent Public Policy Polling survey pegged support for the wind credit at 54 percent and opposition at just 26 percent. Obama has ridiculed Romney's energy policy in his campaign stops in Iowa and in televised ads, hoping to sway the state's large percentage of independent voters.