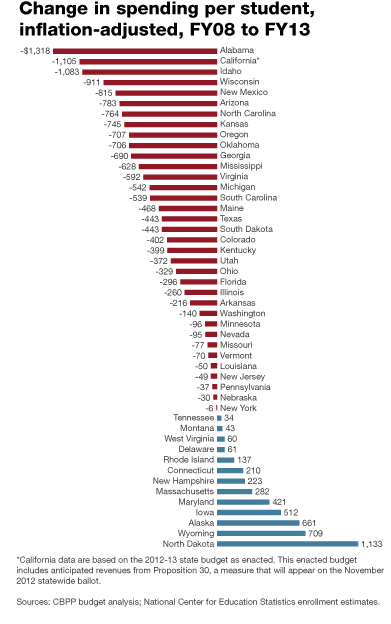 Five years after the recession began, state funding for elementary and high school education remains vastly lower than it was in 2008. Despite an uptick in state revenues, budgets for the coming school year are lower than they were last year in half of all states, according to a new report from the Center on Budget and Policy Priorities.

In a review of education budget documents available from 48 states, the report found that 35 spent substantially less per student than compared to five years ago.

State aid represents nearly half of all K-12 education funding. After the recession began, the share contributed by the federal government rose as stimulus money was funneled to states to help preserve teachers' jobs. Local government's share of total education spending also increased as a share of the total because property tax revenues—the main source of local education funding—did not decline as rapidly as state revenue streams, according to the report.

In the 2009 school year, state funding decreased by 6.5 percent from the previous year, the Census Bureau found, the biggest decline since the bureau began reporting the data in 1977. Even so, education funding across the country increased by a half percent, while per-pupil funding increased by 1.1 percent, according to a recent Stateline story.

But in 2011, federal stimulus money ran out at the end of the school year, putting greater pressure on states to pick up the slack. Likewise, added education support from previously strong local property taxes declined. A result of the nation's foundering real estate market, property tax collections were 2.8 percent lower in the 12-month period ending March 2012 than they were the previous year, according to the CBPP report.

In most cases, the latest state funding cuts were modest, but they came on top of deep cuts made in previous years. Even in states that began to restore school funding this year, the increases were, “far from sufficient to make up for cuts in past years,” according to the report's authors.

States with the deepest long-term cuts include Arizona, Alabama and Oklahoma, where per-pupil funding was down more than 20 percent since 2008. Schools in Idaho, South Carolina, California, Georgia, Wisconsin, North Carolina, South Dakota, Kansas, Mississippi, Oregon, Illinois, Texas and New Mexico sustained cuts of more than 10 percent over the same period.